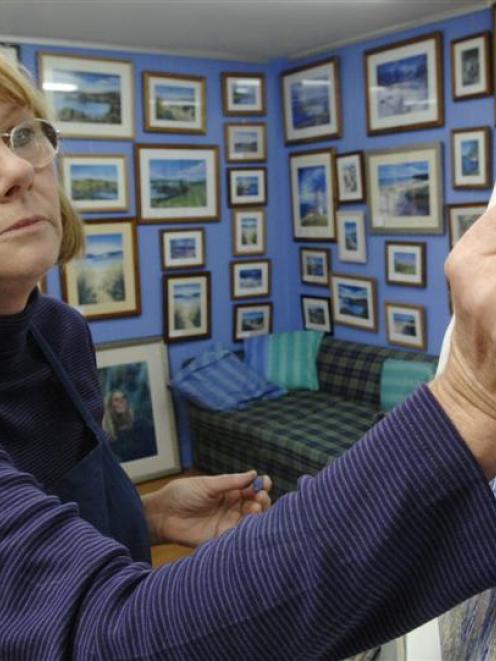 Cathy Shemansky works on Summer in Central. Photo by Linda Robertson.
The word "pastel" might mean pale in colour but there's nothing subdued about the work of pastel artist Cathy Shemansky. Kim Dungey reports.

Cathy Shemansky was in a national trust building in England full of "fusty portraits in oils" when one work captured her attention.

"One in the corner just shone. It was a quirky pose, too.

"It was a self-portrait in pastels by [French Rococo painter] Quentin de La Tour and it was 400 years old.

The vibrancy of pastels appeals to this former primary school teacher, whose personality is as colourful as the works lining the walls of her Otago Peninsula gallery.

She talks quickly, barely stopping for breath, and says her husband has labelled her hyperactive: "In fact, he says I'm from Mars."

Shemansky (60) adds she tends to "binge paint" in winter because summer is "mad" with other activities.

As well as having her own gallery at Company Bay, she and husband Alex run a bed and breakfast and tend a 1350sq m English cottage-style garden that contains 120 roses.

She helped organise last weekend's national convention for Pastel Artists of New Zealand, including a bus tour that stopped for afternoon tea in her garden.

She is a member of the Otago Art Society and its artist in residence at Dunedin Railway Station from April 18.

She is also on the committee of the Otago Peninsula Arts Group, which opens its own exhibition tomorrow.

Once a week, she volunteers at the Yellow Eyed Penguin Trust nursery, and in summer she and her husband are wardens for the little blue penguins which come ashore at the end of the peninsula and are in danger of being "loved to death" by tourists.

"It's a very nice lifestyle just, at the moment, a little too busy.

"But there's not one thing I want to give up."

The former Australian also enjoys painting in public, partly because it promotes pastels which are sometimes not taken as seriously as other mediums.

Otago Art Society records show there have been periods when "pastels have been all the go and just faded out", perhaps for lack of someone to champion them, she says.

"In Australia, any art show I entered had sections for oils, watercolours, acrylics and pastels.

"No-one questioned pastels being the "sad little sister", whereas here there's a bit of convincing needed to [persuade] people that they are a valid medium and that you are painting, not drawing."

Pastels cannot be mixed like watercolours or oils but manufacturers produce as many as 500 different colour gradations by mixing in more or less white chalk, giving the artist a virtually unlimited palette.

"That's half the fun because I love colour," she says, motioning towards small drawers filled with crayons of every hue.

"It's partially about collecting beautiful colours.

"It does become a compulsion."

She works from photos taken on her Canon 300D SLR, and tries to improve on them, perhaps making the sky a little bluer, removing elements that don't work and getting light into the painting - a style she describes as "an illusion of reality".

"When I first started with pastels, I tended to overwork them and end up with something really dull.

"As you become more competent with the medium, you can lay the pastel on and get it right first time - theoretically," she says, laughing.

"One good thing about pastels is you can erase it if you make a mistake.

"You can take a lot of the colour off with an ordinary eraser and try again."

Other artists have told her she could erase with bread but she worries a painting "might grow mould further down the track".

The downside is they are dusty and can be damaged without proper care.

Rather than spray her finished works with fixatives which might dull the colours, she hits the back of them to get rid of any loose pastel, then has her husband frame them under glass.

Although her mother painted in oils, Shemansky took up painting by chance.

Gardening was her main hobby until she hurt her leg and was "driven indoors".

It was only then she began drawing, initially with pen and ink, then coloured pencils.

About the same time, she was looking for a paper to do to finish her teaching degree and friends suggested drawing.

"'I can't draw', I told them, but they said I'd be fine because I was good at assignments.

"So I did it and realised I could draw. I just hadn't sat still long enough [to find out] - and I realised how much I enjoyed it."

She took some classes and eventually had a solo exhibition after a Brisbane framer advanced her $3000 worth of framing on condition she pay him back.

Selling 30 paintings in one night meant she could do that immediately.

While few people might say they moved from Australia to Dunedin for the climate, in her case it is true.

After holidaying here biennially for 15 years, returning to the heat of Australia became less and less appealing.

Discovering her home overlooking Otago Harbour, with an old garage that could be renovated, enabled her to achieve a long-held dream of opening her own gallery.

Shemansky says she makes "about half of a living" out of painting but could probably survive on sales if she wanted to "live on a shoestring and not buy any plants for the garden".

"I consider myself a professional artist and I look at this as a businesswoman as well as an artist.

"Unfortunately, some really talented artists don't do that," she says, adding some want to paint in isolation and not be known publicly. "Unfortunately, a lot of it's about promotion and some of it is about luck."

Winning the portraiture prize in the Otago Art Society annual awards a few years ago was an honour.

But selling her first painting in about 1993, "a proper painting in an art exhibition, not to relatives or friends", was just as big a highlight.

Then she felt she could really say she was an artist.

Painting makes her feel relaxed and keeps her sane, she says.

"I've stolen something from reality and got to keep a part of it.

"And for me, it's a never-ending awe that I can do it.

"I wonder where it comes from.

"I've never had the feeling I'm a born artist.

• See them
The national exhibition of PANZ (Pastel Artists of New Zealand) is on in the Otago Art Society Art Station Gallery in the Dunedin Railway Station until April 17.

The show consists of 91 works from artists around the country, including two by Cathy Shemansky.