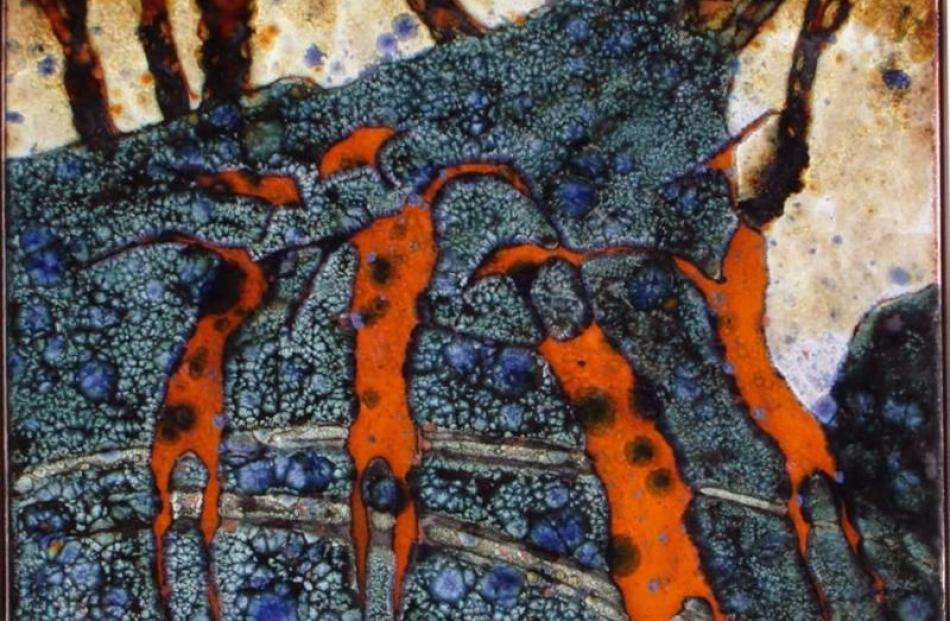 'Call Off Your Dogs' by Gennie de Lange 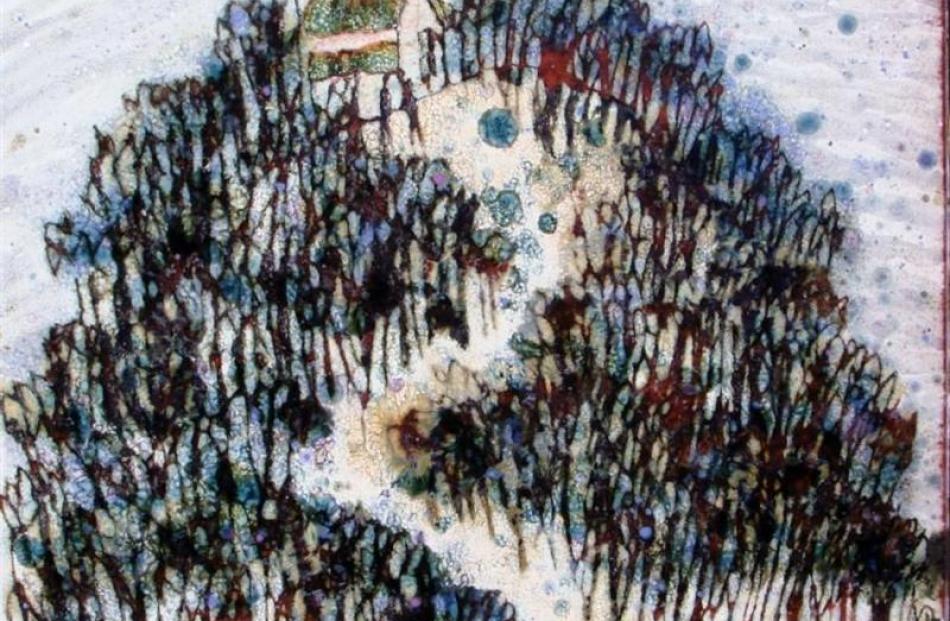 'In Search of a Cage' by Gennie de Lange 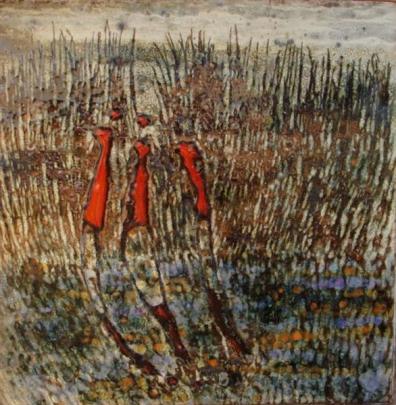 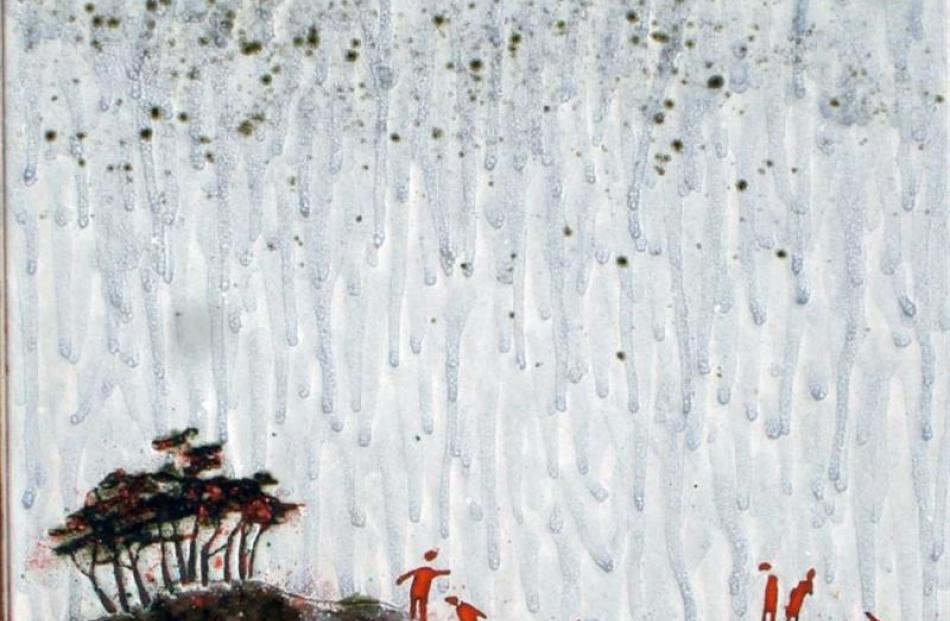 'And The Heavens Wept' by Gennie de Lange 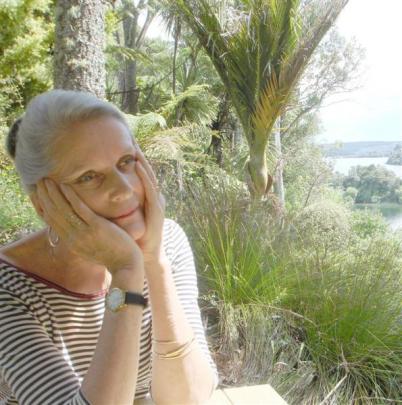 Gennie de Lange at her studio in Rotoiti.

'How to capture a memory or a thought
that overwhelmed me months ago
Time has passed. Now
I am captivated by a new cloud
of emotions that like a bird
I am gathering
to weave into a nest and settle in.
If I confide what I am trying to express
I will entangle you in the twigs
that forest my mind.
So I leave you free
to gather what you want
from these liquid glass images
fired onto simple clay'
-Gennie de Lange

Gennie de Lange knew she was meant to be an artist.

"I always wanted to be an artist when I was younger. But my father said I had to be able to make a living, so I trained as a potter.

"That was before the days that women had to make a living," she laughs.

"So, I went to Scandinavia and learned to be a potter and then I learned glazing in London."

De Lange (66) studied industrial design, illustration and painting at Wellington Polytechnic from 1958 to 1960, before moving to London in 1963 and studying at the Hammersmith School of Art.

"I love enamel and have a good collection of New Zealand, Finnish and Italian glass. I'm fascinated by glass and how it behaves. I can even glass blow," de Lange says.

She returned to London in 1980 to learn glass-blowing at the Middlesex School of Art.

"I've been able to do what my father said I couldn't do," she muses. "Be an artist."

De Lange now divides her time between New Zealand and the fishing village of Sète, in the south of France.

"It's an old house deep in the forest. I work from my studio here; although studio is a rather grand name for a garage," she chuckles.

De Lange has exhibited regularly in New Zealand and overseas since the mid-1960s and her ceramic works are held in public and private collections around the world.

She was invited to exhibit in a group show at the 1967 New York World Fair and has now been experimenting with her specialised glazing technique for more than 40 years.

"I'm actually painting with earthenware glazes. It's a technique I learned at Chelsea Pottery in 1965," she says.

"It is a bit different. A lot of glazes don't like going on top of each other and they can turn black. It's been a process of trial and error, really," she says.

"I start by buying an unglazed floor tile. That way, there's no frost sealing, so it can absorb water. Then it's coated with an opaque white glaze, which makes it like canvas.

"Then I draw with a dentist's tool through the terracotta, then oxide and deepen the lines and shadows and then paint layer upon layer of colour."

The matt colours twist and transform after being fired in a kiln for three days.

"I've got masses of glazes, going back to about 1967. Some of them are lead-based, so they've been discontinued."

"I can usually visualise the final result," she says.

"Rather than merely imitating painterly effects, she recruits the characteristics of ceramic glazes to texture the surface," Otago Daily Times art reviewer Richard Dingwall once wrote.

The finished works glow with fire, yet are impervious to water.

"They can be displayed indoors or outdoors. You can't destroy them. They'll last for centuries," de Lange says.

A much-loved dog, Roly, was a recurring theme for many years.

"He died four years ago. He used to appear in a lot of my pieces."

Now she watches other people's dogs and imagines what they are thinking.

The works are influenced by Australian tribal art, with primitive figures engaged in simple activities.

"We were very good friends with Patricia. She was like a second mother to me," de Lange says.

"She lived with us when we were in Wigram in the '60s, when she was depressed, just before she went into Ashburn Hall."

De Lange's husband is University of Otago emeritus professor Richard Donald, whose book on France, Painting Out The Past. The life and art of Patricia France, was published last year by Longacre Press.

Donald met France through de Lange's mother, Marjorie, who was one of France's lifelong friends.

Their daughters, Eliza and Stephanie Donald, also work as artists, in Melbourne and Auckland, respectively.

•See it "Bird In Search Of A Cage" by Gennie de Lange opens in Milford Gallery, Dunedin, on Saturday, January 31, and runs until February 21.