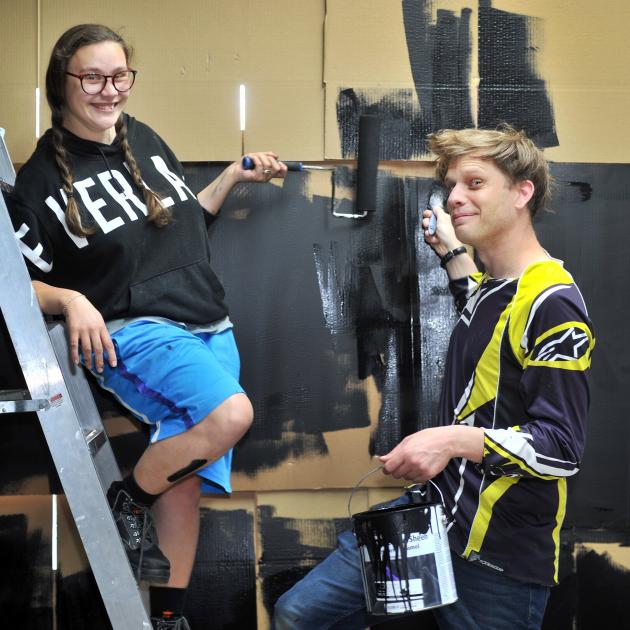 Watching fake paper money float down around them as people scrambled to reach an exchange box on the floor really spooked Piupiu Turei.

Turei and partner Jos van Beek were in the middle of an installation celebrating the release of an album in Rotterdam involving a very informal casino performance when they thought having a money exchange would be a good idea.

"It was a different way to present the music."

A few hours later they placed the "exchange", a box of paper they had cut up, on the floor.

"It went crazy, it was quite intense. There was money flying around everywhere. People were clambering over each other to reach the bits of paper."

It really brought home to the couple how money affected people, even when it was not real.

"I mean it went straight in the bin after the show. Suddenly people had this opportunity to get as much as they could. It was quite confronting."

That was the impetus for "E-Kasino", an interactive installation and public programme created by themselves and a collective of artists.

"It’s about gaming and what gaming means to society."

People are invited to come into the gallery, leaving their New Zealand dollars behind, and make themselves comfortable on the couches, have a cup of tea or coffee and make some money.

"It’ll be quite a relaxing space; we want people be making their own money."

Participants will then be encouraged to go into a room painted black where multiple video projections by Joanne Francey and E-Kare will play.

They will then be drawn through to the back "gambling room" where Beek has constructed poker machines running on web browsers.

"The idea is to play the games, recording your score, whether you are in debt or not."

People will be expected to "pay" for their games through an honesty box system.

"It’s asking people to reconsider the value they put on money — they have to make it themselves, spend time and labour on it and decide how they want to spend it.

"As they go further back into the gallery, it will get stranger and weirder. By the time they get to the gaming room, hopefully, people are thinking about how they are being manipulated."

While researching their work, they discovered just how much goes on behind the scenes of a casino to ensure that people stay and part with their money, from the design of the space to staff interaction with gamblers.

"I like the idea of gaming. I’m Dutch so I’m very tight. Casinos make a lot of money off gambling. The longer you are in there the more you spend," Beek says.

A visit to a casino recently turned Turei off the idea completely, although she is quick to point out she does not stand in judgement on people who do enjoy them.

"I’m never going back to a casino again. They are very magnetic places, very manipulative.

"I never used to think about it until we did this show. Now I think, hang on."

She hopes the project will highlight issues around gambling and has brought in PGF Services, which offers counselling and advice to gamblers and those affected by it.

"It’s really important for us to approach the topic with care."

Learning the statistics behind problem gambling in the community has been a shock, she says.

As part of the public programme for the project, artist Lidia Grigorut and Sarah Campagnolo from PGF will talk about the issues around gambling and casinos.

"It can be hard to talk about, but as communities we need to have these conversations."

They are also advocates of zines and plan regular zine workshops during the exhibition. Angela Stanton will also write poetry for attendees.

Involving the community in their work is important for the duo who met in Dunedin in 2012 when Beek, who grew up in Hastings, was here to perform at the Fringe Festival.

"We met through a very good friend of mine who was also a friend of Jos ... at a music gig. Art is only as good as the community."

They lived in different cities — Turei was in Dunedin and Beek in Auckland — but ultimately they moved to the same city and started performing and working together, forming E-Kare in 2016.

"We’re both open-minded about making art and music with anything; whatever you have around. More like a punk ethos."

They headed to Rotterdam where Beek has family to experience the electronic music phenomenon of gabber, a style of house music, essentially very fast techno, very popular in the city in the 1990s.

While living there, they collaborated with alternative multidisciplinary arts platform WORM Rotterdam and performed music at Attent and Pink Pank, as well as experimental theatre at Rotterdam De Schouwberg.

They moved back to Dunedin nearly two years ago and now have a one-year-old daughter, Wilhelmina.

Beek is a stay-at-home dad and coder and Turei has just finished her second year at Dunedin School of Art.

Turei believes working with fellow artists, many of whom are friends, enriches the whole experience.

"The whole process is much more fun. It’s not just about us; it is about a whole lot of people coming together."