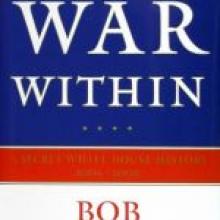 How does President Bush compare to other US wartime presidents? Bob Woodward shares his opinion in The War Within.

One of modern warfare's founding fathers, the 19th-century Prussian field marshal Helmuth von Moltke, was of the opinion that no military plan, however well and carefully conceived, could survive its first contact with the enemy.

The same might be said about preconceptions concerning what makes a good wartime president.

Lincoln - solitary, brooding, agonised - was what we'd call today a micromanager, involved in everything from the development of new weapons to individual generals' tactical planning.

What Lincoln and Roosevelt did have in common was mature idealism coupled with iron resolve and an exquisite adaptation to the realities of their particular historical moment.

The question of what sort of wartime president George W. Bush has been runs like a thread through Bob Woodward's brilliantly reported The War Within: A Secret White House History 2006-2008, the fourth volume in his running insider's account of the Bush administration's conduct of the wars in Afghanistan and Iraq.

The series began with a generally positive assessment of the president in Bush at War and has moved down through deepening levels of disenchantment in Plan of Attack and State of Denial.

In this latest volume, the weight of evidence finally produces a verdict - and it isn't a happy one.

Bush, in Woodward's view, is the worst kind of wartime president: controlling and disengaged, all at once.

Worse, he frequently is not only detached from unpleasant or inconvenient facts but is also positively hostile to those who recite them.

As Woodward reconstructs the past two years - in a stunning series of on-the-record interviews with participants - this wilful blindness has spilled out of the White House and into the departments of Defense and State in a perfect maelstrom of dysfunction.

"For years, time and again, President Bush has displayed impatience, bravado and unsettling personal certainty about his decisions," Woodward concludes.

"The result has too often been impulsiveness and carelessness and, perhaps most troubling, a delayed reaction to realities and advice that run counter to his gut. . . . Bush was intolerant of confrontations and in-depth debate. . . .

"The president was engaged in the war rhetorically but maintained an odd detachment from its management. He never got a full handle on it, and over these years of war, too often he failed to lead."

The central events in The War Within are the conception and execution of "the surge," the infusion of additional US troops that appears to have stabilised the security situation in Iraq, creating an opportunity for President Nouri al-Maliki's government to begin to assert itself.

The success of this strategic shift is a significant issue in the presidential campaign, since the Republican nominee, John McCain, was an early, vocal supporter of the surge. (Indeed, although the Arizona senator has supported the war from the outset, he has consistently criticised the Bush administration for committing too few troops to the fight.

Senator Barack Obama opposed the war but recently conceded that the surge is working. Woodward's appraisal is more nuanced.

He argues that the current situation was created by the confluence of three forces of which the troop surge may be the least consequential.

More important is a hyper-secret new programme (by inference, a combination of technology and operational techniques) that has allowed US forces to identify, locate and kill huge numbers of the insurgency's leaders, including members of al Qaeda.

When military and White House officials learned that Woodward knew of the secret programme, they asked that he withhold any details because publication would endanger the operation and compromise its use elsewhere.

Responsible though Woodward's decision may be, it lends a fairly frustrating opacity to what is The War Within's biggest revelation.

The author also argues that the diminution of violence in Iraq owes a great deal to the so-called Anbar Awakening, in which the tribal sheikhs in that crucial Sunni-dominated province have turned on al Qaeda and aligned themselves with the US and the new central government.

Woodward points out that the success in Anbar began long before the surge with the marines' successful counterinsurgency efforts on the Syrian border.

The result of those efforts reached critical mass at about the time the surge began.

In fact, Woodward quotes a memo from one of General David H.

Petraeus' counterinsurgency experts, musing that the troop surge has had the opposite effect from the one intended, which was to give the al-Maliki government a safe space into which it could extend its influence as a national regime.

Instead, the memo argues, the presence of additional US troops has allowed the tribal leaders to assert themselves and their influence not only locally but also on the Baghdad government in an evolving but specifically Iraqi expression of civil society.

Unexpected - unless, of course, you recall von Moltke's dictum.

The weight of evidence Woodward provides to support his indictment of Bush's leadership comes in his reconstruction of the surge's origin.

By 2006, it had become apparent, even to the White House, that the US strategy in Iraq was failing utterly.

Violence was on the rise with no end in sight.

A study group convened by the administration was told by Michael V.

Hayden, director of central intelligence, that the situation - under the prevailing strategy - was hopeless.

Still, according to Woodward, Bush resisted any change, refused to fire then-Secretary of Defense Donald H. Rumsfeld and persisted in misleading the public with upbeat assessments because he feared the truth's effect on mid-term congressional elections.

After the Democratic gains that November, Bush's doggedly loyal national security adviser, Stephen J. Hadley, convened a secret White House task force that cut the Joint Chiefs of Staff and the Pentagon out of the loop and went to retired military generals - mainly the army's former vice-chief of staff, General Jack Keane - for strategic advice.

It was a decision that, according to Woodward, has left America's top military commanders demoralised ever since.

The result of Hadley's secret consultations was the surge, a concept the Joint Chiefs had opposed from the start.

In essence, their argument was that, even if the surge succeeded in reducing violence, the US might end up a loser because it would increase the Iraqi's dependence on American military forces.

The more troops committed, this line of thinking went, the longer more of them would have to stay to prop up the Baghdad regime.

Moreover, committing the number of troops Hadley demanded - and he, not Bush, was the author of the policy - would leave the Pentagon unable to respond to any other global threat.

Even Petraeus, who emerges from Woodward's account as a formidable and honourable warrior, agreed on that point.

Hand-picked by Keane, who has continued to be a back channel between the Oval Office and Petraeus outside the military chain of command, the new commander of US forces in Iraq met privately with Bush immediately after his Senate confirmation.

The president called his decision to order the surge "a double down."

"Mr President, this is not double down," Petraeus responded.

No matter who wins in November, "all in" is precisely where the next president and the American people will find themselves when Bush leaves office in January.