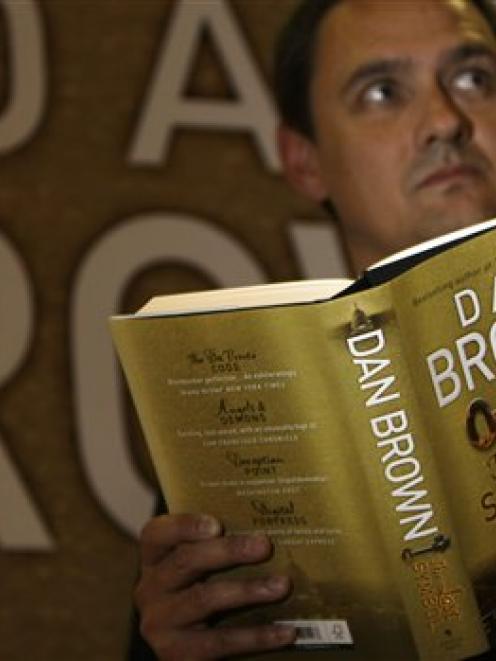 Jon Howells, press officer for Waterstone's booksellers, poses for the cameras as he reads a signed copy of US author Dan Brown's new book 'The Lost Symbol ' in London . (AP Photo/ Alastair Grant)
Dan Brown does it again, on paper and on the screen.

Doubleday announced today "The Lost Symbol," Brown's first novel since "The Da Vinci Code," has already sold more than 1 million copies after being on sale for one day in the United States, Canada and Britain.

That total includes preorders for the book, which has been at or near the top of Amazon.com for months.

An additional 500,000 copies has been ordered, bringing the total print run to 5.6 million copies. "The Lost Symbol" came out Tuesday.

Brown's book was well short of the all-time debut, "Harry Potter and the Deathly Hallows," which in its first day sold more than 8 million copies in the US alone.

Doubleday initially said the sales were for hardcover alone, but spokeswoman Suzanne Herz said the number also includes the digital edition, which Doubleday released at the same time despite industry concerns that the standard $9.99 e-book price might hurt sales for the more expensive hardcover.

Thrillers have been especially popular as e-books and no thriller writer is hotter than Dan Brown.

Since coming out, "The Lost Symbol" has been the top seller on Amazon.com's overall list and on its list for books downloaded on Amazon's e-reader, the Kindle.

On Amazon's list for top thrillers and mystery novels, the Kindle edition was No. 1 as of yesterday afternoon, followed by the hardcover.

Amazon.com spokesman Andrew Herdener declined to say how much the book had sold in each format, but said Amazon was "extremely pleased" with sales in all categories. Herz also declined to offer more specifics.