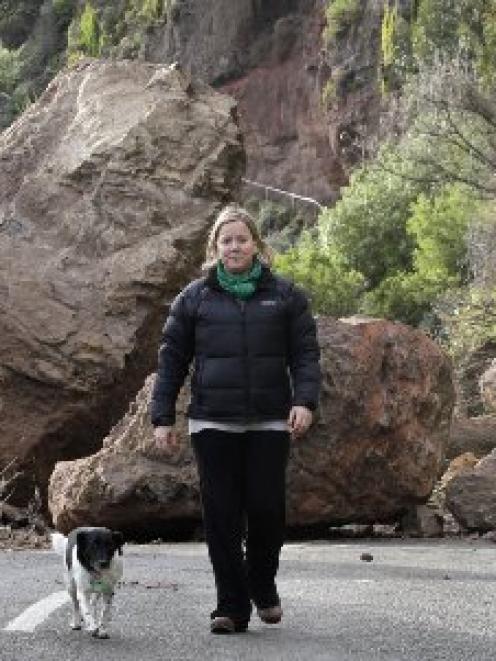 Charlie Hudson walks her dog along Heberden Ave in Sumner. Assoc Prof Annie Potts, co-director of the New Zealand Centre for Human-Animal Studies at the University of Canterbury, is writing a book looking at the impact the Christchurch earthquakes had on pets. Photo by NZ Herald
A new book looks at the shape of human-animal relationships after the Christchurch quakes, writes Andrew Stone, of The New Zealand Herald.

Three worlds collided when the 7.1 earthquake shook Christchurch in September 2010.

Massive forces bent faults below the Canterbury Plains, jolting a sleeping city awake at 4.35am. The other world - that occupied by animals - got an almighty fright, too.

Now, nearly three years since the first fearful tremor changed lives and landscapes, the impact on animals and their owners is being revealed.

It is emerging from accounts collected by Assoc Prof Annie Potts, co-director of the New Zealand Centre for Human-Animal Studies at the University of Canterbury, for her new book Animal Earthquake Stories.

Potts - who shares a quake-damaged house in Lyttelton with a collection of animals - says for many animals and their owners the earthquakes have been a terrifying but also quite profound experience.

Animals behaved differently. Cats often disappeared for a day or so. Rabbits thumped the ground, pet rats tended to bite each other and some dogs bolted in panic.

An avian nurse told Potts that cockatiels got quite disturbed, flapping wildly in their cages and pulling out feathers. Free-range hens on the property Potts shares with her partner and centre co-director, Philip Armstrong, emerged from the biggest two quakes none the worse for wear.

As an example of the impact of the quakes Potts tells the story of Louis, a miniature poodle who went blind after the 6.3 magnitude shake in February 2011, which claimed 185 lives.

''The vet felt this sudden blindness was directly caused by shock and fear and did not anticipate this condition would improve, so Louis and his human friend were having to adjust to a new life without sight,'' Potts said.

Pickle, another small dog, became anxious and miserable after the February quake.

''No measure of behavioural therapy or medicine or emotional support was able to console him,'' his owner told Potts. He went from being a happy-go-lucky dog to an animal in perpetual terror. Pickle was put down, but the decision to euthanise him left his owner deeply affected.

Potts offers another account from the quakes that she says illustrates the depth and importance of human-animal relationships. The dog in question was a fox terrier called Shelter, best mate of Jamie, a teenager from Sumner.

The family lived opposite the Sumner RSA where a large boulder smashed through the building and left a man dead. Shelter, whose home was so damaged it was deemed unsafe for habitation, was found hiding under collapsed furniture.

Gina, Jamie's mother, told Potts: ''He wasn't injured but he was in shock. I guess they go by your reaction too: afterwards whenever there were shakes I'm yelling at Jamie to get under a doorway and Shelter is jumping up and looking round anxiously.''

Eventually Shelter adjusted to aftershocks, but other problems surfaced. Dust created by cliff collapses around Sumner caused an allergic reaction in his skin.

Miserable and irritable, the dog reacted by biting and gnawing at his skin, which in turn caused infections.

A vet put Shelter on antihistamines and steroids, but as he had a pre-existing heart condition, he couldn't stick with his medications and last year succumbed to heart failure brought on by the steroids prescribed to control his skin problems.

Having already lost their home, Gina and her son Jamie had to cope with the loss of their dog.

Says Potts: ''It's hard enough losing a special member of your family, but it's even worse to know that this wee dog died prematurely due to the environmental hazards facing humans and animals post-quakes.''

A psychologist, Potts says the story of Shelter and Jamie shows ''how absolutely important the bond between boy and dog was for the recovery and resilience of both post-quakes''.

The teenager lost his dog months after the big quakes, a reminder of their lingering repercussions for humans and animals.

''It's very hard to be coping with the loss of your home, the damage and disruption to your community and city, and also having to face the loss of a beloved animal.''

Animal owners Potts interviewed told her that their post-quake relationships with pets were extremely precious.

The animals provided affection, stability, security and reassurance during tough times. Equally, owners who had lost animals or relinquished them because they could not stay in their new home, created stress and upheaval.

She was critical of the response of some Christchurch landlords in turning away companion animals, saying healthy cats and dogs were euthanised because owners of rental properties refused to house ''all members of a family''.

Potts has been studying human-animal relationships for a decade. She is the author of Chicken, a critically acclaimed illustrated natural and cultural history of the domestic fowl.

The book is ''dedicated to all chickens born to and killed for agribusiness, scientific research and entertainment, and to those special humans who educate, advocate and provide refuge for these birds''.

With co-authors Deidre Brown and Philip Armstrong, Potts has also written A New Zealand Book of Beasts. Out later this year, the book looks deeply at interactions between humans and animals in our arts, literature, culture, media and everyday life.

In Potts' assessment, New Zealanders have an inconsistent approach to animals.

On the one hand, people who broke through cordons after the quakes to rescue animals or find lost companion pets showed a compassion that had emerged strongly in Christchurch.

But a darker side was evident from the number of healthy animals put down after the quakes, some because people didn't want them to go to new homes.

Beyond the earthquake stories, Potts believes that everyday Kiwi culture is contradictory when it comes to animals - she cites well-documented cases of animal cruelty and the popularity of games for country children involving throwing dead possums.

''I think that New Zealand sees itself as a nation of animal lovers but it stops a lot of the time with pets and cherished native birds,'' remarks Potts.

As for possum-throwing, ''goodness knows what that teaches children. I think kids have a natural capacity to bond with animals but in my view that teaches them that to become adults you've got to realise that these animals - possums - are bad but these - cats and dogs and pet lambs - are good.''

She enjoyed challenging accepted cultural beliefs about animals and mentioned the persistent view of chickens as dim-witted.

In fact, studies have shown chickens have the ability to recognise the faces of 100 other chickens, and to avert their gaze from humans they didn't like.

Potts says her new book about animals and the earthquakes will show how the human-animal relationship cuts both ways.

''There are stories of happy and secure companion cats and dogs becoming physically closer to their traumatised humans.

These animals do not appear to have been adversely affected but their human companions have been - and the animals then spend more time with these people, they might curl next to them in bed and they didn't do this before.

''There's something accepting and comforting in our special nurturing relationships with animals;

"I'm not saying animals don't communicate to us, they certainly do, but they do this in non-linguistic ways which are every bit as vital and fascinating as 'talk'.

"Sometimes I think we humans talk too much - instead of sensing, feeling and living the world around us.''