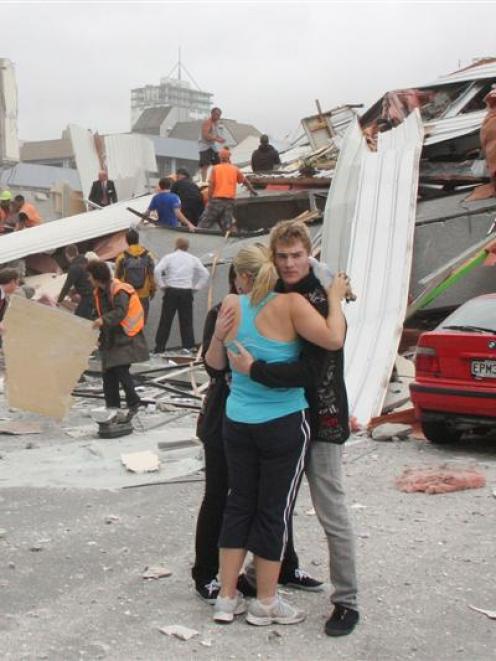 CTV staff comfort each other as rescue personnel work to rescue people trapped in the collapsed CTV building. Photo from The Star.
If fire chiefs hadn't gone ''missing in action'' during the major event they had trained for, Alec Cvetanov believes his wife might have been pulled alive from the rubble of the CTV building.

A key coroner's report into the deaths of eight people who survived the collapse, but died before they could be rescued, is being released today.

The 20,000-word report clears the ''outstanding, courageous, and selfless'' search and rescue teams of contributing to the deaths of Tamara Cvetanova, of Serbia; Cheng Mai of China; Rika Hyuga, of Japan; and Jessie Redouble, Emmabelle Anoba, Ezra Medalle, Reah Sumalpong and Mary Amantillo, all from the Philippines.

But father-of-two Mr Cvetanov, who spoke to his trapped wife six times by cellphone and told rescuers of her exact location, says coroner Gordon Matenga then contradicts himself by saying, ''more people, more resources, better communication and a better structure ... may have improved the chances of saving more lives''.

The inquest in late 2012 heard crucial rescue gear was not made available to all CTV rescuers as they scrambled over the mountainous debris of twisted steel and shattered concrete.

The New Zealand Fire Service, which runs the USAR teams, was meant to be the lead agency at the site, given the fire, which broke out in the lift shaft.

Two USAR teams scrambled from the North Island were separated from their gear - against international guidelines - and arrived after a team from Australia. And rescuers working on the eastern side of the collapsed building where Dr Cvetanova was known to be alive, did not know about critical cutting equipment and listening devices being used on the western side.

Had the gear been made available, Mr Cvetanov believes his wife, a 42-year-old Serbian paediatrician who was studying English at the King's Education language school on the fourth floor of the building, could have been pulled out alive.

Such organisation and decisions should have been made by Fire Service executive officers.

But Mr Cvetanov says the 13 executive officers in the city that day went ''missing in action''. They failed to take charge of the disaster zone, set up an incident control point or manage resources and manpower.

Mr Matenga said it was ''difficult for me to understand'' why they failed to step up.

''This goes to the heart of what happened,'' said Nigel Hampton QC, who represented the Cvetanov and Hyuga families at the inquest.

''The people on the ground did superb work, did everything possible within their constrictions to get out trapped people.

''Where they were let down, in terms of personnel, in terms of resources, equipment and so on, was in the structure above them.

''Why would 13 executive officers not impose an incident control point at the site and not take command of that site?

''As Captain [Ernesto] Ojeda said, the coroner's only expert, why would you not want to play in the game that you trained for all your life? Why would you go missing? And when they go missing, then all those command structures and the control that should have been there go missing as well.''

The coroner made eight recommendations aimed at improving search and rescue operations.

The Fire Service says it has already either completed or started work on all of the recommendations.

4. For all major disasters where international assistance is sought or accepted, it become the default position that a request be made to United Nations for the assistance of an UNDAC team.

5. Fire Service, in conjunction with the Civil Defence Emergency Management Group, develop and undertake joint exercises with such Light Response Teams that have been established by local authorities.

8. The Ministry of Civil Defence and Emergency Management to give consideration to amending the CIMS model to provide for the situation where there are multiple sub-incidents.

By Kurt Bayer, of APNZ.