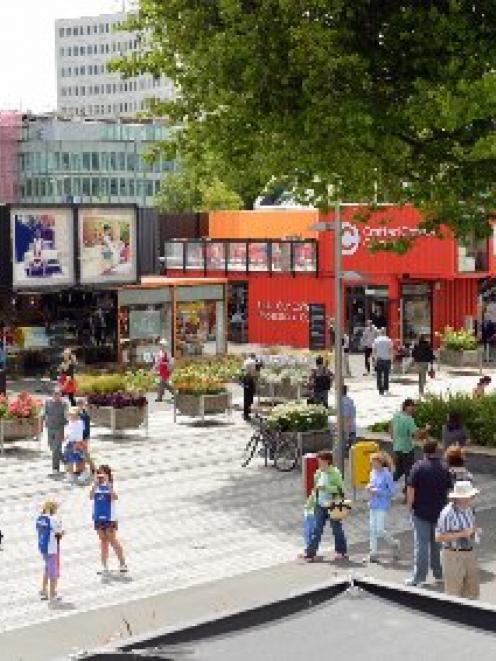 Canterbury's reconstruction appears to be gaining momentum, with positive data on jobs and retail spending. Pictured, Cashel St in the CBD. Photo by Stephen Jaquiery.
There are positive signs to the Christchurch rebuild on several fronts, as its employers lead the way in the country's surge in hiring expectations and Christchurch retail and hospitality spending outstrips national levels.

Nationally, employer expectations of hiring staff are at their highest levels, at 33.7%, since the global financial crisis, but in the South Island expectations are 52.6% of employers, driven by the Canterbury rebuild, according to a survey by international recruiter Hudson.

''The Canterbury rebuild is taking shape, as activity starts to shift from planning and design into delivery mode. This is creating a more positive economic environment and stronger hiring intentions,'' Mr Rogers said in a statement.

Around Christchurch city, after seasonal fluctuations are removed, retail and hospitality sales increased 2.4% in the June 2013 quarter - its fifth consecutive quarter of strong growth, SNZ industry and labour statistics manager Tehseen Islam said while the city fell behind national figures after the quakes, strong growth during the past five quarters had pushed the city ahead of national growth.

Mr Rogers said that nationwide, the construction, property and engineering sectors had the highest positive hiring intentions, at 51.2%, followed by Government at 41.9%, manufacturing 31.9% and financial services and insurance 30.2%.

''Overall, more than half - 57% - of employers, intend to keep their staffing levels steady next quarter,'' Mr Rogers said.

Medium and large organisations had increased hiring expectations and more than a third of employers in each segment were seeking to hire more people during the next quarter.