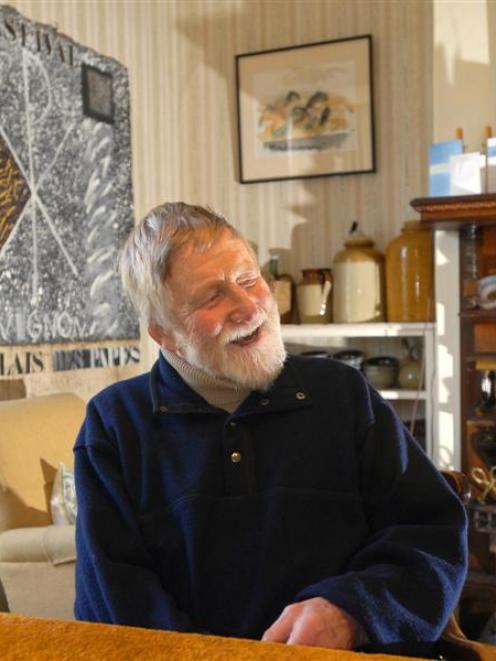 Ted Middleton at home. Photo by Gregor Richardson.
An extraordinary collection of short stories will be launched in Dunedin today. Beyond The Breakwater - Stories 1948-1998 represents a lifetime's work by O. E. Middleton. Nigel Benson meets a writer who sees more than most.

"When you write, you have to be your own toughest critic," Ted Middleton muses.

I'm talking to the man who made me want to be a writer.

The first story that ever got under my skin as a young boy was published by Middleton in 1967.

Killers is about a travelling family that deliberately runs over a hawk while it's feeding on road kill; the senseless slaughter of a creature faithfully performing its natural function.

It made such an impression on me that I have avoided killing anything since.

Except fish, of course, but that's different.

Such is the power and endurance of Middleton's words and imagination.

A retrospective collection of his short stories, Beyond The Breakwater - Stories 1948-1998, is being released today.

The book spans half a century and weaves together 26 of his best short stories, selected from the 63 short stories he wrote between 1948 and 1998.

"This book is the 10th collection of my stories. It's a retrospective selection of my short fiction," Middleton says in the lounge of his Pine Hill home.

Hotere also contributes a portrait of his old mate as the frontispiece.

"I'm pleased to have it beautifully produced with the fifth cover Ralph Hotere has done for me," Middleton says.

Behind him, a huge Hotere work reaches from the floor to the ceiling.

It seems almost incidental that Middleton is blind.

"I've been writing in Braille for 25 years now. nThis is my workhorse," he says, patting what looks like an Enigma encryption machine.

A five-centimetre-high stack of Braille pages sits beside the machine.

"All my writing is based on how my text will sound read aloud. Literature began as an oral thing and I reasoned that if you wrote something that sounded well aloud it would be more successful," he says.

"I have always been able to hear the sound of what I write in my head and that's sharpened when I read it off Braille on to tape. That side of language is very important to me.

"So my writing may appear superficially simple but, if it's read aloud, certain things will come out, and you don't necessarily get all I put into it if you just look at it on the page."

The collection will be launched at the University of Otago staff club at 11am today by Emeritus Professor Lawrence Jones, who also wrote the foreword for the book.

Prof Jones believes Middleton's blindness has added a unique dimension to his writing.

"He gets things like the feel of scales on a fish, or putting one's hand in the fish's gills after you've caught it. I can't think of another New Zealand writer who does that sort of thing the way he does. He sees the world his way and he uses language his way."

Blindness has been a hindrance, rather than a handicap for Middleton.

"It's like Beethoven losing his hearing, for a writer. The limitations of blindness are very severe. It is a very limiting thing in many ways," he says.

"When I'm writing I'm totally reliant on the vocabulary I carry with me all the time. It's not always adequate. If I want to look up something in the dictionary I either have to ask Cynthia [his partner] or ring a friend."

Middleton believes he would have been a more prolific writer had he been sighted.

"It would have been a lot easier and I would have produced a lot more," he says.

"But, the founder of Western literature, Homer, was himself blind."

Middleton was a young soldier preparing for World War 2 when he was diagnosed with retinitis pigmentosa, a progressive disease of the retina, in both eyes.

"I was a 20-year-old at Waiouru in 1945 when I was diagnosed and discharged from the army. When part of the retina dies it doesn't repair," he says, simply.

In 1946, he learned of a new experimental treatment in the United States and worked his passage over as a seaman.

However, on arrival he was refused entry by the shipping company doctor and, so, he deserted.

His subsequent imprisonment in United States prisons such as Cook County Jail as an illegal immigrant formed the experiences for The Big Room and The Collector.

"I was locked up with murderers and parole violators. At Cook County they had a clock that was stopped at quarter to midnight, because that was the time when the last person was electrocuted there and it was a reminder to everyone."

He was deported in 1947 and returned to New Zealand.

"It was shattering, having come so far, but all experience is good and the bitterest the best of all," he says.

Middleton is an advocate of the underclass.

A writer who has chronicled the ordinary man.

After his discharge from the army, he was manpowered to labour on farms during World War 2.

"I worked as a rouseabout in shearing gangs on farms in the North Island. You were forced to go, because it was essential work and there wasn't enough manpower," he says.

He subsequently worked as a wharfie, clerk, seaman, construction worker, timberhand in a cooperage, adult education tutor, telephonist and landscape gardener - a background that has given him an empathy and understanding for his fellow man.

"I became a jack of all trades. It's a good thing for a writer. It gives you insights into trades and ways of working, and people I would never meet if I sat in a university all my life," he says.

"Most of my more serious work relates to experiences I like to work over very carefully. I write mainly about what moves me.

"I work very slowly. It's always been like that. I'm not a copious writer. I mull over things."

Middleton was in his 50s when he learned Braille, after his eyesight gradually declined over a period of years.

"It's a laborious business," he sighs, his forearm resting on his Perkins Brailler.

"It's very easy to lose your sight. It's very hard to learn Braille. One of the things the average person doesn't realise is that less than 5% of blind people can read Braille.

"Blindness is sometimes concomitant with later life and people find it harder to learn Braille then. It's much easier to learn if you're blind from a child," he says.

"It was also difficult for me, because the pad on the index finger of the left hand does most of the work and I've done a lot of heavy work, so my fingers are calloused."

Middleton was born in Christchurch in 1925 as Osman Edward Middleton, but has always been known as Ted.

He moved to Dunedin in 1970, when he was appointed Burns Fellow at the University of Otago, and has lived here ever since.

His working background and wide travels have also given him the ability to genuinely identify with other cultures, creating characters ranging from Maori in Drift and Not for a Seagull to Pacific Islanders in The Loners, German in The Man Who Flew Models and Spanish in Crows.

"I'm especially fond of the stories I've attempted to write from the inside about Maori characters, like Drift," he says.

"I've had a lifelong interest in Maori culture and Maori language and always felt as a writer you have to be able to relate not only to your own sex and own culture, but other cultures.

"The Maori experience in New Zealand has always been one of the threads of my work. I have tried to articulate a Maori point of view. If you're going to write about them you have an obligation to render them authentically."

Middleton's stories are theatre of the mind.

"It's a mystery. I don't even understand how it happens. It's the mystery of the human imagination. But, if you have the experience and, especially, if it's a strong experience . . ."

His writing has often been compared to that of Frank Sargeson, but what Sargeson viewed through field glasses, Middleton has seen from the trenches.

Like Sargeson, Middleton plucks most of his narrators and central characters from their working-class backgrounds.

He tells the stories of outcasts, loners and victims and tells us something about ourselves along the way.

The two writers were long-time friends until Sargeson died in 1982.

The late Janet Frame was also a good friend and a great admirer of Middleton's work.

"O. E. Middleton is a fine writer. He's the only New Zealand writer who has made me weep over a story," she said.

"I met Janet in the 1950s when she was living in the army hut at the back of Frank Sargeson's [in Takapuna, Auckland]. She was terribly, terribly shy," he says.

"In the 1960s, when Janet was living on Waiheke Island, Frank, Janet and I would sometimes meet for dinner at Frank's, or at a local Chinese restaurant.

"Frank recognised her talent. She stayed there about a year. Many of us stayed in Frank's army hut at one time or another. Frank was very unusual for his time," he says.

Sargeson's small house became "a sort of suburban oasis or refuge at this time for a number of young intellectuals and writers", such as Frame, C. K. Stead, Kevin Ireland, Maurice Duggan and John Reece Cole.

Middleton learned of Frame's admiration for his writing after a concert in Dunedin.

"Charles Brasch, Janet and I used to go to concerts together.

"One night I was escorting her back to her bus stop at the corner of George St and London St and she told me that thing about making her weep.

"My initial defensive reaction was to deflect it away by saying 'But, there could be various reasons for that'," he chuckles.

"I was in the Centre City Supermarket and Janet was shopping with her niece, Pamela [Gordon]. She came over and told me she had leukaemia. She died soon after."

Middleton delights in human foibles and particularly, you sense, his own.

It is the hallmark of a great writer. In order to examine peculiarities, you must first recognise them in yourself.

"My focus in reading has always been to learn from the great books of the past and avoid reading my New Zealand contemporaries, even though I have many writer friends going back a long way," he says.

"I don't want my ideas and experiences affected by the experiences of other people. I've had an interesting enough life, having travelled as I have and worked at a whole range of occupations."

Middleton's writing has won him a bevy of awards and his stories have been translated into different languages, including Russian, German and Mandarin.

"I'm interested in language and languages and would have loved to be able to speak more of them. I learned Esperanto when I was 17.

"I joined the Esperanto Society in Auckland and learned it quickly enough to be able to carry on conversations," he says.

"I absorb very rapidly and have a good memory for what I've heard. It's natural to hear text read. Cynthia and [retired science teacher] Kathryn Dolby also read to me regularly," he says.

"Writing is a kind of compulsion, as Hemingway said. When your juices are flowing it's great."