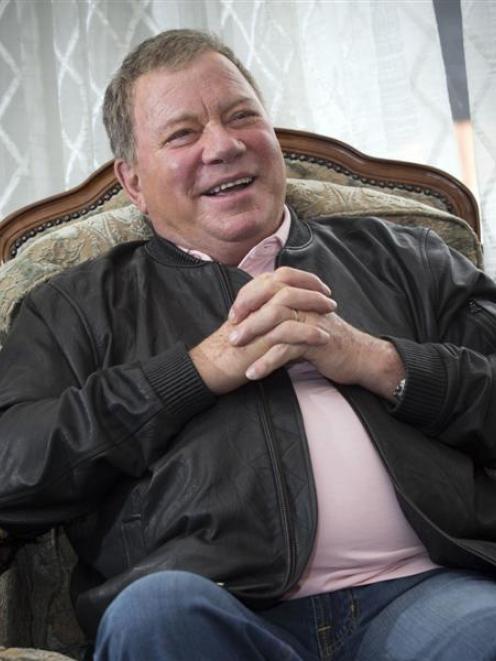 William Shatner. Photo by the NZ Herald.
William Shatner has become as famous for being himself, as for any of his on-screen creations. Tom McKinlay meets the man.

"Um,'' says William Shatner. Then he seems to reconsider his delivery, as an actor does.

"Um,'' he says again, but this time longer, deeper. An "um'' with warm resonating bass notes that though delivered sotto voce, would carry to the very back seats of an auditorium.

It is likely the thick low timbre of the um is vibrating in the glassware of the room, the atoms excited.

Why would they not be. William Shatner is larger than life. He went where no-one had gone before. He's hosted a show called Weird or What. And at some point in all this, he has become as famous for being himself as he is for his fictional creations: James T. Kirk or Denny Crane.

Shatner is sitting in a low armchair in an Auckland hotel, socks and sandals, his small, strong hands resting on his perfectly round stomach. That familiar, cherubic face looks terrific when you consider his 82 years and that this is a flying visit to New Zealand in a busy schedule.

It seems very unlikely he's wearing a toupee (others disagree on this point, arguing the toss on the blog "Shatner's Toupee'').

The reporter from the Otago Daily Times says he's from Dunedin, taking a moment to describe its location out on the furthest extremes of the known world.

"You're into the wilds there,'' Shatner says. There's definitely a note of approval, as if to say: "Yes, that sounds like a final frontier, I know about those.''

And know a thing or two he does, as the result of the activities of a friend of his, environmentalist Michael Tobias, on Stewart Island.

"There's an island at the southern tip of the South Island and there is a game preserve and he's running part of a reserve - so he's got an island, part of an island, the other part is a national park,'' Shatner relates.

"He is attempting to put back the fauna and flora, the natural habitat. And it's possums that are the problem, right?'' he says.

Shatner became friends with Tobias when fronting an environmental documentary in the early '90s - that in typical Shatner style somehow involved him performing life-threatening stunt-work climbing in the French Alps.

"We made Voice of the Planet in which the conceit was that Gaia [the life force of the Earth] was coming to life and asking for help. And we talked to Gaia.''

It was an important show for Shatner. He notes in his autobiography Up Till Now it was a programme ``I would be proud to pass along to my grandchildren''.

Indeed, he says the environment has remained a central concern for him.

"Consumed by it. With the real knowledge that we may very well have passed our limited window of time to put things right and that we are on the down slope,'' he says.

Once, when working on a science-fiction show, he took the opportunity to assemble a panel of eminent ecologists, he says, so he could question them about the state of the natural world.

It seems entirely appropriate that the man who discovered "strange new worlds'', leaving many of them in better shape than when he found them, should have concerns for ours. Way back in the 1960s, Star Trek asked the big questions.

"Right, it did,'' Shatner agrees with some enthusiasm.

He is frustrated that the last United States presidential race failed to do so, leaving climate change off the agenda.

As grounded as all this is in fact, coming from Shatner, it inevitably carries a science-fiction sheen, such has been the importance of the genre in his working life.

Indeed, he says he was always interested in science-fiction, even before Star Trek came along.

"I just read now, before you came in, Nathan Myhrvold - he's a scientist, one of the guys who started Microsoft - and he's a great amateur chef and he's written the definitive Modernist Cuisine - but he's got a lab and many of the scientific disciplines are his interests, his areas of expertise.

He has a plan, a patented plan, of using hoses, lifted by nitrogen balloons, 25,000m, 15-20 miles up in the air, hoses that will pump sulphur dioxide into the air at both poles and lessen the degree of sunlight by 1% and you won't be able to smell it or taste it, it won't be observable.

"So he has all these credentials of being an expert scientist and he has this extraordinary scheme, which he patented to drag a hose 25,000m up into the sky and pour out fumes. I mean it's total sci-fi today and what if he's right, but what if he's wrong?''

The prospect of such a science-fiction climate-engineering scenario being visited on Earth clearly intrigues Shatner, despite the implications.

The Canadian actor's visit to New Zealand has come courtesy of television platform Sky, which is launching a new channel, Jones!, carrying a roster of classic series. Star Trek and its various reincarnations are there, as is TJ Hooker, an '80s cop show in which Shatner played the eponymous lead.

"So TJ Hooker was written to be a cop who is very tradition bound,'' Shatner says. "The Miranda Rights get in his way - or whatever is the equivalent, reading a person's rights to them before they are arrested here in New Zealand - that gets in his way of making the arrest. He is bound to do it because it's the law, but he's angry about it.

"At its best that's the battle that Hooker goes through every week. Not being able to punch the perp' to make him confess gets in his way.''
But it doesn't necessarily stop him.

Many of Shatner's characters have been scrappers, not least Kirk, who duked it out with all manner of extraterrestrials.

Actor Ed Norton, of Fight Club fame, was moved to nominate Shatner as the one celebrity, above all others, that he would like to fight.

"Yeah, I know, but we'd never get any money for a match like that. It's too overwhelming,'' Shatner says, before moving on to an enthusiastic tour of his on-screen pugilism.

"There's a movie style of fighting that are round-house punches - you telegraph your punch so the stuntman can duck out of the way so the actor won't hit him. And I have hit many a stuntman.

"But as TJ Hooker - I used to box a little - as TJ Hooker I kept my punches close to the body and did short sharp shots and I changed the style.''

Shatner has balled his fists and pops them through the air. Pop, pop. Norton would be sallivating.

The series - which also features a very young Heather Locklear - was made back during Shatner's serious acting period, which covers his early TV forays, in shows such as the courtroom drama For The People, and takes in Star Trek (Tribbles notwithstanding).

But that was not always his oeuvre. And is not, perhaps, what he has become best known for.

"What I think happened was that I was adept at comedy in Canada,'' Shatner says of his earliest days on stage. "I did a lot of theatre comedy in Canada and when I came to the United States I was in a serious play ... and from that moment on they started casting me in serious stuff and the comedy took a back seat for a while and we seem to have come full circle.''

The full circle was completed with the appearance of Denny Crane, the narcissistic, misogynist, male-bonding, mad-cow-disease suffering, undefeated lawyer from Boston Legal.

It was, Shatner says, the best-written show he's been in. So good that the usually ad-libbing actor stuck religiously to the script.

"Absolutely. David E. Kelly is a genius. And he has written so much. With terrific writers, great writers, you find you cannot change a word. It alters the rhythm, it is not the right meaning. He seemed to have the knack to choose the right word for the right moment.''

Not only was the part a triumphant return to comedy - earning Shatner his two Emmy Awards - it confirmed his place in the American pantheon.

"It was during this period that I suddenly, and certainly unexpectedly to me, became more popular than ever before in my career,'' he notes in Up Till Now. "I became ... ready for this ... Shatman.''

It was not his first entry in the lexicon: "Shatnerian'' was earlier coined to describe his unique way with phrasing.

So it comes as something of a surprise to read in the autobiography just how important winning those Emmys was to him.

"I was so moved because I've always felt like an outsider in this business,'' he writes.

That might explain Shatner's extraordinarily broad output, his determination to turn nothing down, which has seen him stretch his talent from the stage to the screen, to directing, producing documentaries, to novels, and on to recorded music. He's not finished with the latter either.

There's a new album in the works, produced by Billy Sherwood, a sometime member of Yes. It follows Has Been, a 2004 album produced by Ben Folds and 2011 album Seeking Major Tom, which features, among others, Sheryl Crow, Ritchie Blackmore and Peter Frampton.

There's a book coming, a movie script "that I would like to direct or act or both'', and a science-fiction concept he is "batting about'', he says almost conspiratorially.

"There is a iPhone app called Shatoetry. That's poetry with S-H-A-T, which is great fun and something that I urge you to buy and play with.''

And there are documentaries and further outings of his one-man show.