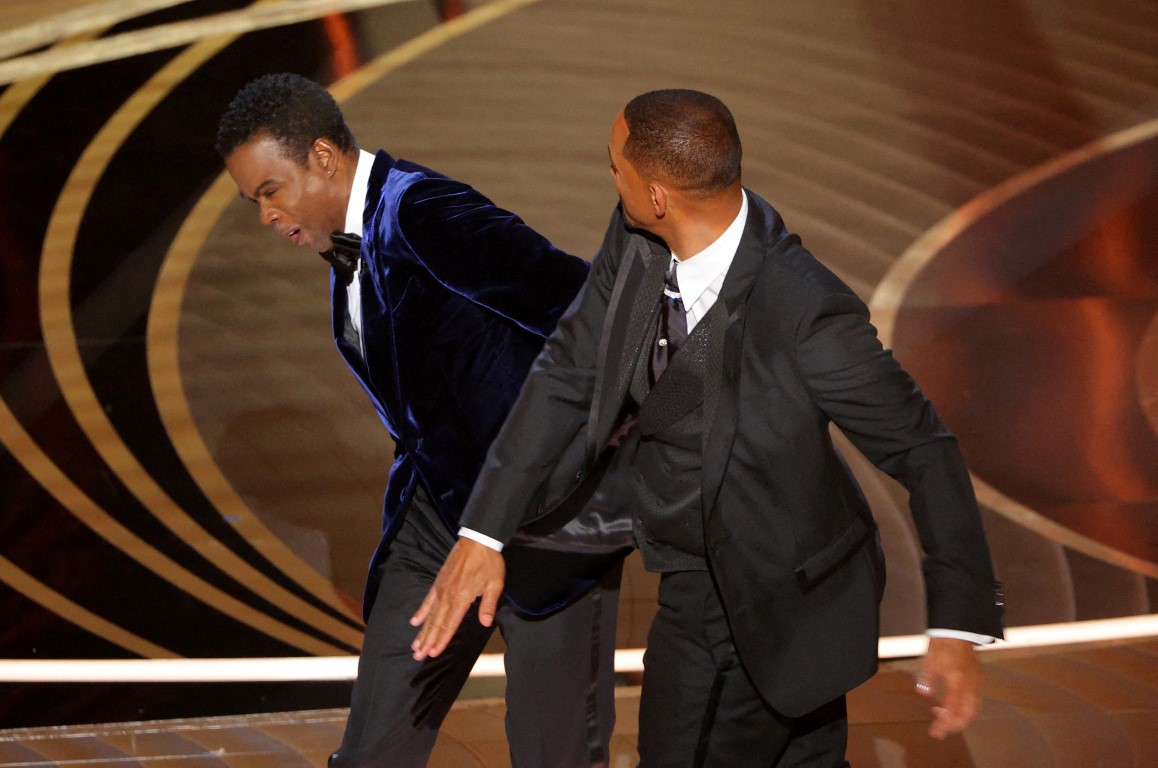 The incident occurred on stage during the 94th Academy Awards in Hollywood, Los Angeles. Photo: Reuters
The Academy of Motion Picture Arts and Sciences, the group that hands out the Oscars, has condemned Will Smith's slap of presenter Chris Rock at Sunday night's (local time) ceremony and said it had started a formal review of the incident.

Smith strode on stage during the televised ceremony and struck Rock in the face after the comedian made a joke about the appearance of Smith's wife, actor Jada Pinkett Smith. Less than an hour later, Smith won best actor for his role in "King Richard."

In the aftermath of the incident, the academy initially only said it did not condone violence, but in a statement today, the academy said it "condemns the actions of Mr. Smith at last night's show".

"We have officially started a formal review around the incident and will explore further action and consequences in accordance with our Bylaws, Standards of Conduct and California law," the academy said.

The Los Angeles Police Department told Variety that Rock had "declined to file a police report" following the event and so they could not investigate.

"I think it gives across this implicit message that if you push me to a particular point, I'm okay and I'm justified in responding with violence."

He said the academy's initial comment was "pretty weak".

"They could do something like revoke his Academy Award, for example ... to get across the message that 'hey, hitting somebody just because you don't like what they've said is not an okay thing to do'."

In his acceptance speech for best actor, Smith apologised to the academy and his fellow nominees.

"Richard Williams was a fierce defender of his family. In this time in my life, in this moment, I am overwhelmed by what God is calling on me to do and be in this world. Making this film, I got to protect Aunganue Ellis, who is one of the most strongest, most delicate people I've ever met. I got to protect Saniyya [Sidney] and Demi [Singleton], the two actresses who play Venus and Serena," he said.

In analysing Smith's comments, Sutherland said it ties in with the concept of benevolent sexism where women are seen as vulnerable and in need of protection by their "man".

"If my partner was made a joke of or abused, I would feel angry and full of pent up emotion but that still doesn't make it okay for me to go and hit somebody, and nor does it actually mean that I have to do it, actually my partner is quite capable of defending herself and I would support her in doing that.

"But I think in these sorts of situations both sides, both the female and male, can get trapped in what's essentially a protection racket really as [the male] tries to defend [a female's] honour and she relies on him to do that."

Sutherland said as a role model, Smith perhaps showed other men it was okay to act aggressively when they did not like what someone said.

US Correspondent Rachel Silverman told Morning Report some argued Smith needed to be held accountable rather than celebrated, and others said even though he had a right to defend, there were better ways to do so.

"[After the Oscars and the incident], he was at the Vanity Fair party, which is one of the most celebrated post-Oscar parties, dancing, and having a good time. He did not address the incident.

"I'm sure that his lawyers, his agents, his people are trying to come with a good spin for what happened, a spin other than the immediate reaction he had when Chris Rock made the joke about Jada Pinkett Smith."

Silverman said most people felt Smith should keep the Oscar.

"Whether they invite him back, whether they ask him to make a full mea culpa is something that is yet to be determined."

But she noted the Oscars had become the talk of the town and was being given a lot more attention than if the incident had not happened.