Is ‘Jumper' Christensen breaking his formula? 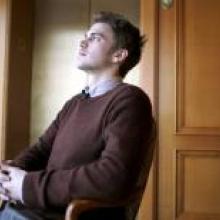 Hayden Christensen prefers the quiet life to that of other celebrities. Photo by Washington Post/John McDonnell.
Our theory on the roles of Hayden Christensen goes something like this: An angry, misunderstood boy-on-the-verge-of-manhood seeks respect and attention and has a fantastically affecting crying scene along the way to his eventual enlightenment and/or vindication.

Really, this happens in virtually all his films, from the Goth teen in Life as a House to a cub reporter in Shattered Glass, to his eventual turn to the dark side in Star Wars. (And no-one cries like Christensen. He's even the cover face on Crying Men, photographer Sam Taylor-Wood's book.

We explain this theory to the actor at lunch, where he's just come from a panel discussion at MIT on quantum teleportation - the basis for his latest film, Jumper.

‘‘You're right,'' he says of our theory. ‘‘There is an underlying theme. I like characters that have an interesting growth, when there's change, and they're affected by the elements of the story. I've always believed that conflict is the essence of drama.''

But now the 26-year-old Canadian is breaking the formula; the trembling man-child character is growing up. In the thriller Awake, Christensen plays a rich businessman who undergoes heart transplant surgery, but begins to suspect the doctors are trying to do him harm. (Critics were not impressed.)

In action movie Jumper, he plays the ultimate wayfarer, a man who can teleport himself around the globe, and becomes a reluctant hero in a secret war.

That skill might have come in useful back when he was cast as Anakin Skywalker, the flawed Jedi knight. Suddenly being Hayden Christensen meant magazine cover shoots, look-alike action figures and your face on a bag of chips.

‘‘When it happened, for a while I wouldn't leave the house. I mean, since my face was in every convenience store, that meant everyone would recognise me and that's really odd. So I just sort of ‘hermitised' for a little while.'' Christensen says he doesn't spend much time in Los Angeles. We learn that he, too, has a theory - on celebrity.

‘‘I think that people's exposure is in your realm of control. It's largely just a function of your choices, and if you don't want to be seen, they don't see you.''

He pauses. ‘‘I think I do an OK job of proving my theory. Sure, fame has its affectation, but you can still lead the life you want to lead. I've never had that fame motivation. The less people know about me, the better my work will be, because the more they know about me, then I'm less believable as a character.''

‘‘Doug . . . really wanted the actors' insight into the story, asking us to script meetings, which was a treat, you know, how collaborative he was. It was really satisfying.''

And Lucas? ‘‘George came up to me on the set one day during my first Star Wars and said something that I never fully understood until after we were done filming.

"It was all very thought-out in his head, and I needed to show up to make his wants a reality. And so really, what he was saying to me, was: ‘Don't let this experience discourage you from what acting can really be about, because that's not what this is.' I just wish I would've figured that out a little sooner.''

Christensen recently bought a 19th-century farm south of Toronto, so he can finally move the things he's been storing at Mum and Dad's. We ask if he kept that rat-tail Jedi braid.

‘‘I did! Only because it was my first Star Wars, and I wanted to keep as much as I could. I got a light sabre, of course, and then I had to keep my boots. I keep all my characters' shoes, actually.''

Shoes? ‘‘Yeah, it's sort of the first bit of my character that I sort of decide on, while I'm figuring them out. Because that's what grounds me and it informs how I walk and how I feel on my feet.''