Dancy adds a twist to the rom-com 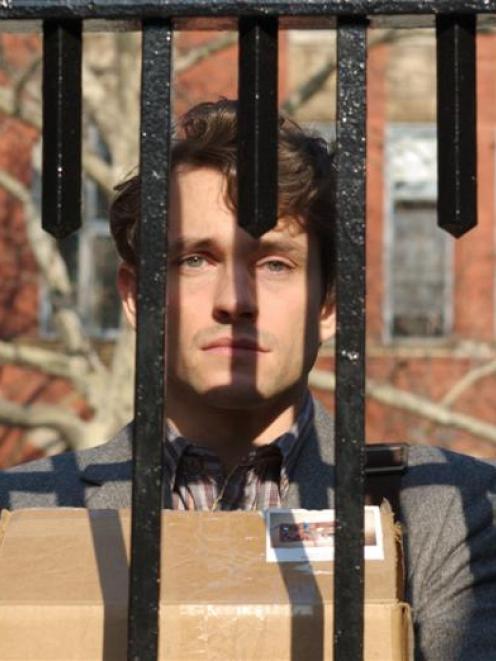 Adam (Hugh Dancy) approaches the Wildwood School in a scene from the film.
Actor Hugh Dancy (34), seems to be on the verge of Colin Firth-ery.

Which is to say that with his curly brown locks, Brit accent and leading-man repertoire (Ella Enchanted, Confessions of a Shopaholic), he may well be the next eloquent English pin-up to grace the walls of Thinking Tweens. (Too bad, kiddos he's engaged to Claire Danes.)

In his upcoming film Adam, Dancy (whose middle names, incidentally, are Michael and Horace) drops his Brit intonations to play Adam Raki, an Asperger's-afflicted New York singleton who begins wading in the tragicomic waters of life and love after his father's death.

Q Did you model Adam after anyone specific?
A No. I met several individuals deemed by somebody else before we met to be close-ish to the character I was going to be playing, in terms of where they were on the autistic spectrum ... The one thing I learned of real value to me when it came to picking and choosing was that there was this huge variety within that little label of Asperger's.

Q Did you have a dialect coach (while working on Adam)?
A No. I guess I have worked with an American accent often enough that I felt relatively confident ... I find it more distracting to have somebody constantly reminding you of how you sound. It obviously takes you out of yourself. And secondarily, we didn't have any money for one anyway.

Q What's it like to be the son of a philosopher? (Dancy is the son of Prof Jonathan Dancy of the University of Reading, in England, and the University of Texas, at Austin.)
A In terms of parenting, the most significant thing is that my father is a teacher more than he's a moral philosopher. I suppose you could say also that he's a teacher in an area that encourages people to ask questions of themselves. And he's very good at it and patient. But all of that really pales into insignificance compared to the fact that he's kind and all those other qualities that you hope for in a father ... Put it this way we didn't sit round at dinner talking about Hegel. Not much.

Q Adam isn't your normal romantic comedy, or your normal romance. What elements do you think Adam's Asperger's or this script tweak about the romance plot?
A We've come to think of "rom-com" as being so comfortingly predictable that we know what's going to happen before it happens, right? The conceit is that two people come together and then some big obstacle falls in their way. ... And there's usually a failure of communication. And there's no greater obstacle to communication than the autistic spectrum. But that only occurred to me toward the end of making the movie - it seems incredibly obvious now that it has that shape, but I remember it was like a flash, it was like "Oh! My God! This is a bit like a romantic comedy!"

Q Asperger's is a nice metaphor for relationships.
A A phrase I've found myself using that fortuitously popped out of my mouth the other day - and I thought, "Well, that's rather true" - is that empathy is something that even those of us who are gifted with it have to exercise all the time, like a muscle. And that's true in any encounter. It's true just to enable us to become semi-successful human beings.