Social commentary and slapstick satire come together in this film, writes Tom McKinlay. 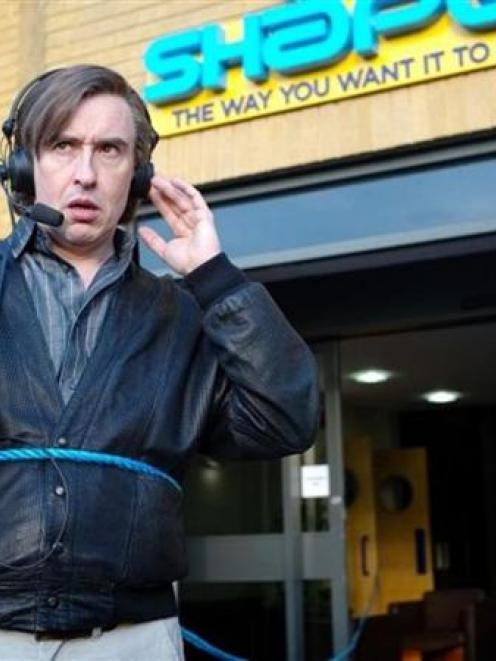 The appalling Alan Partridge (Steve Coogan) is let loose on the big screen in this hilarious piece of slapstick satire.

It is the same old Partridge, familiar from various previous outings, transparently concerned only with himself and the superficial trappings of advancement. But that all becomes slightly more complicated when a hostage drama unfolds in which he is thrown into the role of negotiator.

There's more than a little social commentary running through the movie. The man behind the brilliantly funny dissection of international politics In the loop, Armando Iannucci, who together with Coogan created Partridge in the early '90s, was on the writing team.

However, there's only room for one star here and the barbs fired at the corporate world mainly provide an occasion for Partridge to once again demonstrate that he does not have a worthwhile hair in his well maintained coiffure. Just when you think he has demonstrated the most socially inappropriate behaviour possible, he outdoes himself. It can be a coin toss between cringing and laughing.

The film follows 2010's The Trip, Coogan's amusing outing alongside Rob Brydon, in which the divide between the actor's character and that of Partridge was played as a matter of degrees only. This film puts any confusion to rest. Coogan is back soon, acting opposite Judy Dench in Philomena. It is probably best to see both films.

Best thing: It could be Alan Partridge's hair, or the scene where he becomes trapped in a window. Tough to call.
Worst thing: Coogan's whistling nostril in the amorous scene in the toilets.
See it with: Any fan of The Office. Ricky Gervais is an amateur.