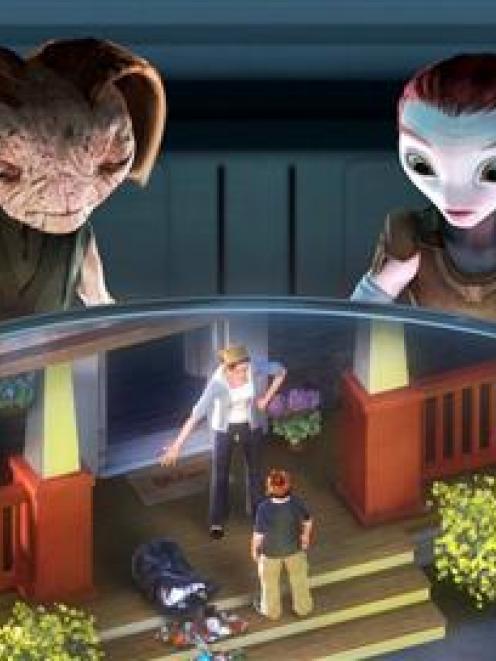 
You'll want to stay through the closing credits of the motion-capture animated adventure Mars Needs Moms, a film from the people who gave us The Polar Express.

There are clips of the cast of the film, Seth Green, Joan Cusack and Dan Fogler among them, wearing the mo-cap suits, dots covering their faces so that the sensors can digitally mimic them as they act out what's going to be animated.

It's fascinating and also the lightest and funniest part of this film, based on a novel by Bloom County creator Berkeley Breathed.

Though light enough in tone, packed with good messages and delivering a couple of lovely, touching moments, Mars still has that plastic look. Cute characters and a Star Wars-derived plot - rescuing a damsel from a heavily garrisoned "citadel" - drive this tale.

It's not bad; it's just not as much fun as a live-action version of the same story might have been.

Milo (Seth Green) won't eat his broccoli. And when Mom (Joan Cusack) lays down the law - "No broccoli, no TV" - he revolts. "My life would be so much better if I didn't have a mom at all." Milo learns a big life lesson with that. Words can wound. He makes his mom cry.

Imagine his guilt when, a few hours later, she's abducted by aliens. He scrambles after her and learns an awful secret - "Mars needs moms". And not just any moms; good moms.

Martians spy on us, and grab a mom doing a good job so they can use her brain to encode their nanny robots, which they use to raise baby Martians.

It all makes for an intricate, if slow and somewhat humour-starved, movie in which a boy learns just how much his mom means to him.