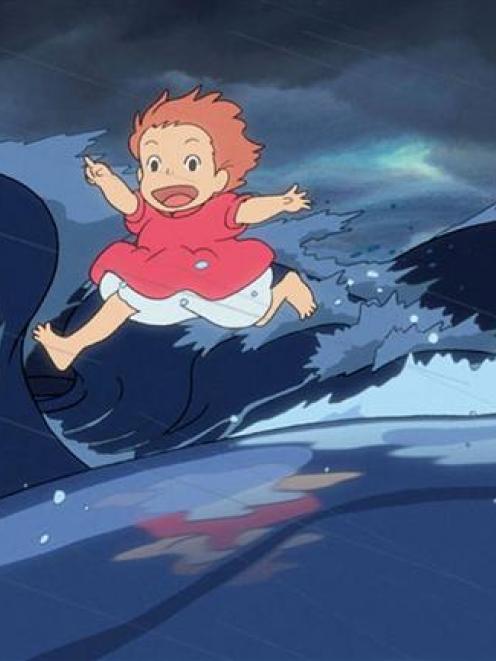 A scene from the film 'Ponyo'.
Hand-drawn delight...


The trouble with knowing what you like is that sometimes you get it wrong. I would never have known that I loved Japanese anime films had I not reviewed Spirited Away, because before I saw any I thought they were not my thing.

I say this to encourage those of you who do not want to watch a kids' cartoon to put those prejudices in a box and see Ponyo (Hoyts) anyway.

Revered director Miyazaki Hayao has long mastered the knack of appealing to all ages. Here he pulls off the more challenging feat of leading us back to the slow-moving pleasures of childhood.

Sosuke (Frankie Jonas) lives with his mother, Lisa (Tina Fey), in a charming seaside port. The adventure begins when Sosuke traps a goldfish whom he names Ponyo (Noah Cyrus).

Ponyo is no ordinary goldfish; she is the daughter of a wizard and, like her parents, she has magic powers. Ponyo decides living under the sea is no fun.

Instead, she wants to be human and live with Sosuke. Being a magical creature, she is not bothered by how she gets her wish. She unleashes her powers and creates a huge storm that threatens everybody living on the coast.

Together, Lisa, Sosuke and Ponyo must work to put things right. The story is told resolutely from the child's perspective, and it would be easy to dismiss Ponyo as slow and dull. Yet if you submit to its rhythms, the joy of taking things slowly becomes liberating.

Best thing: Amazingly, all the animation was hand-drawn. The water sequences are particularly delightful.

Worst thing: Some of the American accents grate.

See it with: A willingness to let the story wash over you.