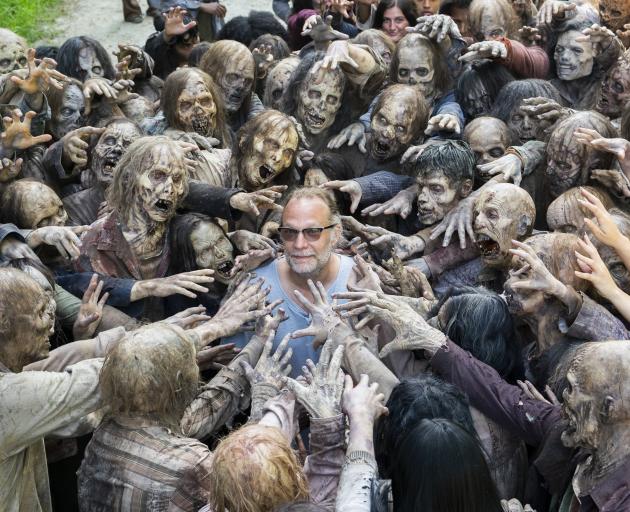 Make-up and effects guru Greg Nicotero relaxes with some close friends on the set of The Walking Dead
Growing up as a rabid horror fan, obsessed with Night of the Living Dead, in Pittsburgh, Pennsylvania, was quite the auspicious start to a lifelong career for Greg Nicotero, he tells Jeremy Quinn.

A seemingly chance encounter in Rome with legendary horror director George A. Romero changed Greg Nicotero’s life forever when he was invited to the set of a new anthology film being made back home, a collaboration between Romero and Stephen King by the name of Creepshow.

"I like to joke that it’s in your blood, growing up in Pittsburgh and loving zombies," Greg says.

"My Uncle Sam was an actor and he’d worked on The Crazies, but when we were on a family vacation, we went into a restaurant and George Romero was sitting there. He invited me to visit when they were filming Creepshow, then Day of the Dead came up in 1984 and I got hired by Tom Savini, and the rest is, weirdly, history."

Cut to 40 years later and Greg is now a living legend in the business, creating wildly inventive and gruesomely realistic make-up and effects, with his KNB EFX Group company formed in 1988, for directors such as Robert Rodriguez, Eli Roth and Alexandre Aja, to name but a few. With hundreds of credits to his name, the chances are, if you’ve ever been grossed out by a gory prosthetic in a film or TV show, you’ll have seen his work.

In recent years, he’s directed episodes of The Walking Dead, and has now added showrunner to his prolific list of achievements, bringing his career full circle by developing, writing, producing and directing the Creepshow TV series, now into its third season and serving as a tribute to Romero’s cult classic. The anthology format allows for an impressive variety of stories and styles, which he hopes will attract both long-time horror fans and those new to the game.

"Throughout my career, I’ve watched the rollercoaster of, ‘Oh, horror’s amazing’, ‘Oh, it’s so lowbrow’, ‘Oh, it’s just revolting’. Usually, it starts going back up when a movie makes a lot of money — The Blair Witch Project, Paranormal Activity, Saw, Annabelle, The Conjuring — and people start trying to dissect the formula instead of embracing the fact that the audience never goes away. If you think about westerns and musicals and all these genres that have the same cycle, horror just has this massive fan base of loyal and devoted followers. 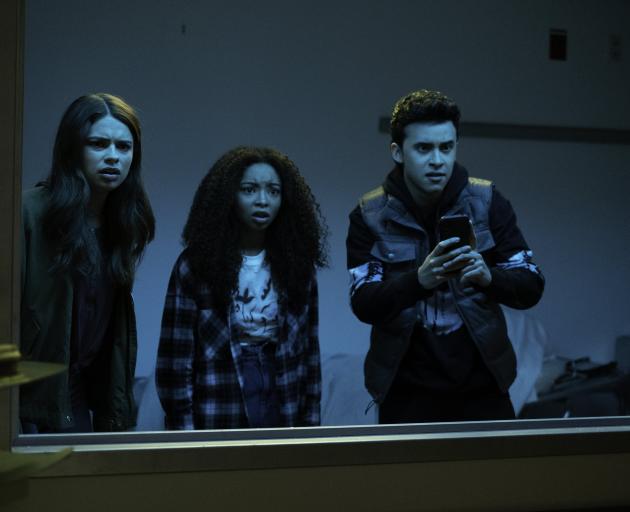 Olivia Hawthorne as Trenice, Nico Gomez as Carlos, and Hannah Kepple as Debra in Creepshow season three, episode one, Queen Bee. PHOTO: CURTIS BAKER/SHUDDER
"It’s like having the ultimate creature in your closet — if you keep feeding it, it’ll stay alive. For me, Creepshow is a great opportunity to feed this monster and not only appeal to the classic filmgoers like you and me, but also younger people who can watch an episode and want to turn back and watch Evil Dead II, or some John Carpenter or Wes Craven movies.

"I have the opportunity, like I did with The Walking Dead, to remind people of these film-makers and this amazing genre, and have them get a chance to revisit it.

"Where season one was about my reverence for George — my responsibility was to keep his legacy alive — with season two and three, the show has gotten more of my voice. I get to pay tribute to the film-makers that I respect, and the reason I’m a fan. When we’d be building stuff at KNB, we’d always go around the room and be like, ‘If you could go back in time and work on any movie, what would it be?’, and somebody would say King Kong, somebody would say Jaws, somebody would say Creature from the Black Lagoon. So, I realised when I was developing season two, it was all about my heart and what I loved."

The series also showcases the incredible practical effects which are Greg’s stock-in-trade, although computer-generated VFX are used occasionally due to the high speed of production (each anthology segment is shot in just three-and-a-half days).

"We do quarter-scale miniatures. We do full-size animatronic puppets. There’s been more VFX in season three because when we were shooting season two, the network was so happy with the output that we just kept filming and shot six more episodes.

"It was crazy — there were a few instances when we literally didn’t have time to build something, and we’d use digital augmentation, but 90% of the stuff in the show is practical."

One of the many season three delights is a segment entitled "Skeletons in the Closet", about a movie memorabilia museum that receives an unexpected, late-night visitor laying claim to one of the skeleton props on display.

It’s full-to-the-brim with classic horror references, and was also inspired by one of Greg’s real-life experiences.

"I’d always been fascinated with this true story that after Dawn of the Dead was filmed, somebody went into a magic shop in Pittsburgh and saw one of the skeletons that Tom had created. They called the police, and the coroner inspected it and said, ‘That’s a real skeleton’. So, when I was doing research for this script, I found that they actually gave it a burial because they thought, ‘This is a real person’."

"When I got hired on Day of the Dead, my first job was to order skeletons. We used to think, ‘Where did they come from? Who are they? How did they ... you know?’ I had this idea that there was somebody running around Europe killing people to use their skeletons in a movie. Maybe it’s an uberfan who wants to donate his body, and that’s what I started thinking with this episode — this isn’t about fandom, it’s about superfandom.

"We were able to interject so many homages — the Phantasm gag, The Shining gag, the Army of Darkness gag, the Poltergeist and Ray Harryhausen tributes ... recreating the Psycho shower scene, shot-for-shot. Even the Peter Cushing movie The Skull — the Hammer movie where they have the POV of the skull moving through the room — and who the hell talks about Rosa Klebb’s shoe in James Bond other than John Esposito and I? So, I had a fantastic time."

In such a storied career, I wondered if he had a favourite effect or sequence that he’d worked on.

"One particular sequence is the car crash in Grindhouse that we did with Quentin [Tarantino]. A lot of times Quentin gives me a tremendous amount of freedom when I’m designing effects for him. He wants it to be organic because that’s the kind of director he is — his inspiration comes from collaborating with his actors.

"With Grindhouse, we ended up creating these gags based just on what he had written. I went down with John McLeod, the effects guy, and Jeff Dashnaw, the stunt co-ordinator, and we designed all these rigs and all these shots.

"Going back and looking at it, and the prosthetic make-up and the dummies we’d done, I was really proud of the end result. After that, Quentin looked at me a little differently, because I don’t know if he really imagined what it would look like, but it gave me a great opportunity to say, ‘Well, if I was Quentin Tarantino, how would I imagine this, based on what was in the script?’

"I think it’s probably one of the greatest things we’ve done together."