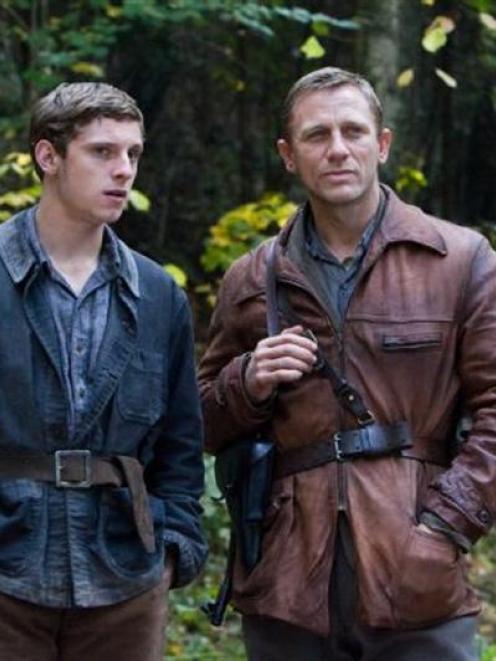 Daniel Craig stars in Defiance, the true story of Zus and Tuvia Bielski, Jewish brothers who eluded their Nazi captors during World War 2. Photo by AP.
During his life and now in death, Tuvia Bielski was many things to many people: a courageous and resourceful leader who helped save more than 1200 Jews from falling into the hands of the Nazis; a humble man whose monumental achievements have inspired at least two books and the feature film Defiance, starring Daniel Craig.

But for many years, Sharon Rennert knew Bielski by a simple, affectionate moniker: "grandfather".

"On a person-to-person level, he was just a very loving, emotional man," said Rennert, a television editor in Los Angeles, who is making a documentary film about her grandfather, the remarkable survival mission he engineered and its enduring effect on her family and the families of those whom Bielski and his brothers saved from almost certain annihilation.

Today, there are an estimated 10,000 descendants of those who survived in the woods.

Relatives recall that Bielski used to say, "I'll be famous when I'm dead."

His words were prophetic.

Since he died in 1987, his story has spread around the world.

Underscoring the growing interest, last year the Florida Holocaust Museum in St Petersburg opened an exhibition, "Courage and Compassion: The Legacy of the Bielski Brothers".

That process surely will accelerate with the release of director Ed Zwick's Defiance, starring Craig as Tuvia, and Liev Schreiber as his pugnacious brother, Zus.

For Rennert (43), researching and recounting the story of her grandfather's extraordinary deeds have taken her on a 20-year odyssey into her family's history and to the heart of her Jewish-American identity.

While growing up in western New York, Rennert was largely unaware of how Tuvia, Zus and their brother Asael rescued about 1200 Jews by hiding them in the thick Belorussian woods for three and a-half years.

As depicted in Defiance, the Bielski siblings persevered through a combination of intelligence, cunning, bravery and a capacity to endure extreme physical and emotional hardships.

Refusing to be cowed by the invading Germans, they launched guerrilla attacks and bloody reprisals against the enemy and its collaborators.

"I knew he had done something amazing, but as a young child, I don't think I appreciated it, and I regret that," Rennert says.

"I grew up taking my Jewish identity for granted."

Rennert knew her grandfather mainly as a gentle, modest figure who drove a taxi, spoiled her and her brother with sweets, listened enthusiastically as she hammered away at the piano and beamed with misty-eyed pride when she received her Boston University diploma.

It wasn't until she read his obituary that Rennert fully appreciated the magnitude of his accomplishments.

She then spent three years living with Tuvia's widow, Lilka, in the Midwood section of Brooklyn, New York City.

"I had just finished college, and I was trying to figure out what to do with my life."

Rennert began questioning her grandmother about the adventures of the couple, who married in the woods during World War 2.

At first, her grandmother was reluctant to discuss the past.

"It was like pulling teeth the whole time," Rennert says.

But gradually, Lilka began to open up and, over the years, allow Rennert to start filming the interviews.

Their conversations continued until Lilka's death in the autumn of 2001.

That footage helped form the foundation for Rennert's documentary, titled In Our Hands, a phrase that Rennert explains has a double meaning.

"They took their destiny in their hands during the war.

"But then I feel like it's also in the hands of the future generation to keep telling the stories," she said.

Rennert, who has her grandfather's blue eyes, is putting the documentary together in her apartment.

A black-and-white photo of Tuvia looks down benevolently from the wall above her editing equipment.

The first time she saw it, she says, "I couldn't speak for, like, four days afterward.

I had to process it.

"I think [director Edward Zwick] did a beautiful job."

Rennert's mother, Ruth Bielski Ehrreich, remembers hearing her parents' stories as a child and the survivors who would visit the family's homes, first in Israel, then in Brooklyn, to play cards, drink vodka and reminisce.

The release of Defiance, and seeing the recent flurry of world attention paid to her family's story, has been emotionally intense, Ehrreich says.

"I think the story is long overdue," she says.

"Unfortunately, it's very bittersweet because my parents and my aunts and my uncles are not around to take part in what I think of as a celebration."