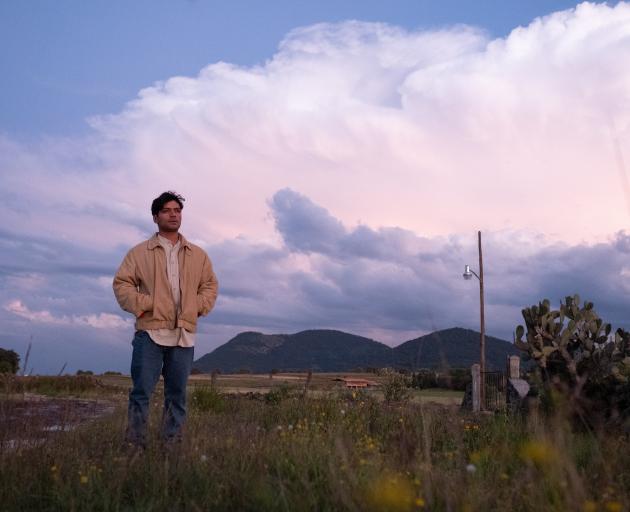 A scene from the film I Carry You with Me. PHOTO: NZIFF
Film-making styles mix in director Heidi Ewing’s story of love, writes Adam Graham.

Film-maker Heidi Ewing was at the 2012 Sundance Film Festival with her Detroit documentary Detropia when her friends of seven years, Ivan Garcia and Gerardo Zabaleta, told her their story.

She had met them years ago while out dancing at a wine bar in New York City. They spoke Spanish, so did she, they hit it off and became fast friends. They were even guests at Ewing’s wedding.

But she had never heard their story — the couple’s full story, about how they had fled Mexico and came to the United States undocumented when they were younger, and as such could never return to their home, or risk not being able to come back — until this night.

"I was just floored," Ewing says.

"I was so floored I thought, this is a story I wanna tell."

From there, the film-maker, an Academy Award nominee for 2006’s Jesus Camp, knew she had to make the movie, I Carry You With Me, as a tribute to her friends. And making that film would present her with new professional challenges and take her to a whole new place in her career.

Not that it was smooth sailing. There was the reality of making a documentary in Spanish. And once she started shooting, she realised she had the end of her movie with Ivan and Gerardo, but the beginning would have to be presented through narrative film-making, an avenue she had never pursued, and scripted and documentary styles are rarely, if ever, combined into the same film.

"It doesn’t happen," says Ewing, on the phone.

"There were no references for me. I just thought I had all this beautiful material with them — it was authentic, it was real, it was intimate — and I didn’t think I’d ever be satisfied with an actor for those moments. I had the real thing. And the fact that it’s real and it’s happening now and when the movie ends, I think it’s more impactful."

So she forged her own path, telling the majority of the tale with a scripted story — not to be confused with re-creations, which have a bad connotation in the documentary world — and switching gears to documentary in the final act.

Ewing loves watching the film with audiences — she jokes it feels like the movie was on the film festival circuit for "100 years" because of the delays due to the pandemic — and experiencing the moment when audiences suddenly realise they are watching the real life subjects of the film.

As a film-maker, Ewing compares shifting from documentary to narrative film-making to suddenly discovering a new wing on your house.

"It’s like opening up a broom closet and there’s 3000 square feet you didn’t know about," says Ewing, who runs and co-owns New York-based production company Loki Films with her friend and business partner, Rachel Grady.

"In documentaries you’re doing a lot of reacting to what’s in front of you and doing your best, and this is not that," she says.

She found the control aspect refreshing, but also knows the downfall of that freedom.

"Even when people have full control, they blow it most of the time."

Ewing was turned on to film by her father, who introduced her to Fellini films at a young age, giving her an early appreciation of the absurd and the romantic. They would hold Fellini film festivals for their neighbours, and her friends would come over and wonder why the movies had no colour. By the end of the makeshift fests, the only ones still watching would be Ewing and her two siblings.

The experience that solidified her relationship with film was when her older brother got his driver’s licence and took her to see Alfred Hitchcock’s Vertigo. She was 10 years old.

"It blew my mind into thousands of pieces, and I couldn’t stop going back to see it over and over again," she says.

"I didn’t know something could be so potent."

She eventually started making her own home movies, using the radio as a soundtrack and editing within the camcorder. In college she went to Georgetown and joined a film society, which shifted her focus from studying to be a diplomat — "I would have been a terrible diplomat, because I always speak my mind," she says — to pursuing a career in film-making.

She made a short film, Dissident: Oswaldo Paya and the Varela Project, in Cuba in 2002, which was followed by The Boys of Baraka about a group of Baltimore students who are sent to boarding school in Kenya in 2005. Jesus Camp, a look at an evangelical summer camp for children, arrived in 2006. (Both Boys and Jesus Camp are co-directed by Grady.)

As an independent film-maker, Ewing is a strong believer in the theatrical experience. The communal experience of seeing a movie with an audience cannot be replaced by the ease and convenience of streaming, she says, and she is worried about the future of documentaries and independent films.

"Obviously the game has changed and I understand that, and there’s actually more opportunities than ever to create for audiences," she says.

"But when people go back to the theatre and they sit in the dark with strangers and they laugh and cry and have this singular experience, I hope they’ll remember how great it is, that it’s not just about watching, but it’s about community and communing with your fellow man and watching art together."