The ones that won't make the Oscar cut 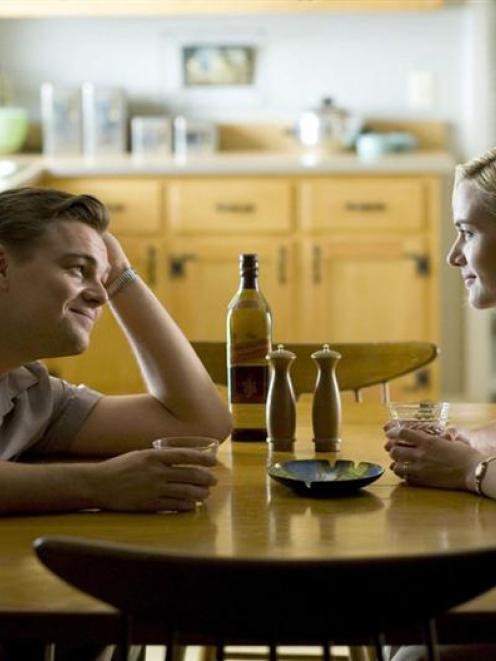 Revolutionary Road is admired far more than it is loved.
Everyone's been writing about which films will enter the magic circle when the Academy of Motion Picture Arts and Sciences announces its best-picture nominations next week, mercifully putting an end to the annual year-end demolition derby that finds nearly all the year's best films being released in the last 10 weeks of the year.

In other words, come January 22, there will be five winners and lots of losers - admirable, well-made movies that quickly will drop off the media radar screen, with the five best-picture finalists sucking up all the air in the room.

So, with a consensus forming around five films that are likely to nail down the best-picture slots (Slumdog Millionaire, Milk, Frost/Nixon, The Curious Case of Benjamin Button and The Dark Knight), it seemed like a good time to take a look at the most obvious also-rans - and why they aren't likely to make it to the finish line.

'Wall-E'
A wonderful, critically beloved movie, Wall-E in any normal world would be a shoo-in nominee for best picture.

It's an animated film, the one genre (along with comedy) that gets no respect from the academy - no animated film has won an Oscar for best picture, even though many classics, notably The Lion King, Toy Story 2, Spirited Away and Ratatouille, were just as good as the live-action winners in their year of eligibility.

Actors, who make up the biggest branch of the academy, almost never vote for animated films, so it's virtually impossible to put together enough support from other branches of the academy to register a win.

Hence, the best-animated-film ghetto, which, like at Monday's Golden Globe Awards, allows an animated delight such as Wall-E to get some recognition without having a legitimate shot at best-picture stardom.

Some commentators have suggested that if Disney had spent just another $20 million to push Wall-E, it could have gotten over the top, but Disney probably is right not to throw good money after bad - too many academy members have a built-in bias against animated films, viewing them as just not "important" enough to vote for.

'The Reader'
There is a lengthy treatise to be written about the perils of adapting challenging literary material to the screen - the old adage being that bad books often make the best movies.

But since my space is limited, I'll give the short answer: You can't land an Oscar when no-one likes your movie.

For all its film-making and acting pedigree, The Reader simply doesn't cut it as a compelling drama.

And it would have to be truly compelling to impress academy voters, who after being suckers for years for virtually any story about Jewish oppression finally seem to have a legitimate case of Holocaust fatigue.

'The Wrestler'
Film-festival sensations rarely turn out to be Oscar winners.

That goes doubly for The Wrestler, which is propelled by a dynamite performance from Monday's Golden Globe winner Mickey Rourke but has failed to ignite with academy voters, who have reacted a bit squeamishly to the movie's deliberately rough-hewn portrayal of life on the wrestling circuit, especially the staple-gun antics and other graphic in-the-ring violence.

'Revolutionary Road'
It's full of great performances (with Kate Winslet already taking home a best-actress Golden Globe for her work) but is admired far more than it is loved.

The criticism is often veiled, but I suspect that many comfortably middle-age academy burghers have found a movie devoted to a cold-eyed dissection of a tormented marriage far too close for comfort.

The movie is based on a terrific novel by Richard Yates that was a cult classic, with the emphasis on cult - it wasn't material that resonated with a larger audience.

In the end, for all its admirable craft, it's hard to rouse a lot of enthusiasm for a movie that forces us to spend two-plus hours with two deeply unhappy people with no happy ending in sight.

'Gran Torino'
One of my favourite movies of the year, if for no other reason than that it allows us to see Clint Eastwood playing out the Dirty Harry myth to a natural but surprisingly redemptive conclusion.

I've been around a number of academy members who seemed put off by the casual racism and foul tongue of Clint's openly bigoted character.

It's apparently too much of a politically incorrect portrayal for liberal do-gooders, who make up a sizable percentage of the academy.

I'm betting this movie will be more appreciated by future generations in much the same way as Dirty Harry, which initially was dismissed by Pauline Kael as a fascist attack on liberal values but now is viewed as a bracing commentary on its time.

'Defiance'
The heroes may be tough Jews, but they're still Ed Zwick characters, meaning everything about the movie is unbearably preachy and earnest.

No movie that has received a lowly 45 from Rotten Tomatoes has ever been a serious best-picture contender.

'Australia'
Thanks largely to Baz Luhrmann's reputation as a consummate film-maker, this was on everybody's initial Oscar-nominee list.

But once the movie arrived, it earned almost no award attention at all, being too self-conscious and self-referential to carry its nearly three-hour epic story line.

Being a box-office disappointment didn't help - the academy rarely embraces movies that can't cut it in the commercial marketplace.

'Doubt'
If there is one movie that could topple The Dark Knight from the No 5 slot, it's this provocative John Patrick Shanley adaptation of his own stage hit.

The knock on the movie is that it's, well, still too stagey.

It's an engrossing but talky drama that lacks the kind of bravura film-making the academy tends to reward.

The end of the film has also left many people scratching their heads, wondering if the film's message is a bit muddled.

But even those of us who have our doubts have to admit that Doubt is loaded with impressive acting performances, giving it an invaluable boost from the powerful actors branch of the academy, support that could nudge it into the Top 5 finalists.