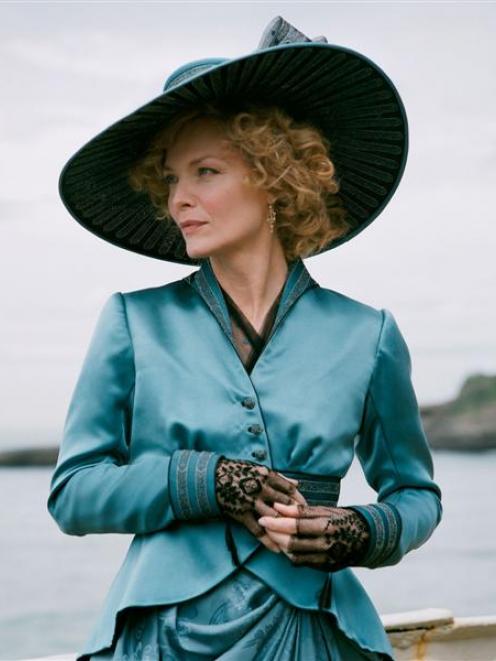 Michelle Pfeiffer. Photo by Miramax.
The list of things Michelle Pfeiffer does not want to hear includes this sentence: "The way I see it, your golden age was 1987 to 1993."

And yet some of us are idiots, and say it anyway.

She responds with silence. The hotel room freezes over. So, we fumble: "Do you, um, think in those terms? In phases?"

"No, not really," she says softly.

"Nm-mm," she adds for emphasis, shaking her head.

More silence. Her blue eyes shimmer. She will win this staring contest.

"No, not really," she repeats.

Then the ice thaws a bit.

"I've always had this fear of getting stuck in the past. Becoming, like, Norma Desmond or something."

Michelle Pfeiffer - siren of cinema, three-time Oscar nominee, the woman on the cover of People's first issue of "The 50 Most Beautiful People in World" - is 51.

Gloria Swanson was 51 when she played the delusional diva Norma Desmond in Sunset Boulevard, about a movie star whose glamour wilted to grotesquerie as her audience moved on to younger idols.

But to become Norma, a star must believe in her own stardom. Norma watches her own movies all day. Michelle will watch her movies once, but never again. She is too critical of her work, she says. It's painful to watch.

She has been a movie star for 25 years, but no part of the job seems to work for her. Pfeiffer hates parties. She hates premieres. She mourns the loss of her privacy, though taking a five-year hiatus helped.

If she had her way, she would not be in a Manhattan hotel talking about her latest movie, Cheri, even though it's her first real lead role in almost a decade.

Twenty years ago, she played a doe-eyed girl victimised by social predators in Dangerous Liaisons. Now, in another adaptation of French literature with the same director, she plays wealthy courtesan Lea de Lonval, who starts to feel the tiny ravages of time when she shacks up with a man half her age.

"Mmm," she says, contemplating these career bookends. "Literally, the virgin and the whore. And everything in between, from then until now."

Where is Pfeiffer now?

Hard to say. She sits right here, close enough for her wrinkles to show, but she might as well be a million miles away. The otherworldly blue eyes shimmer. The face seems cared for but not drastically altered. She looks good.

And it matters. Beauty is an integral part of her career, and now she is playing a character who must reconcile her ageing looks with her chosen profession.

The pfans, naturally, are excited for this movie.

P-F-A-N-S. The people whose pfoolish hearts pfell pfor you, your pface, your pfilms. They're the people in the dark reaches of blogosphere who kept talking about you while you were gone, who refer to you as "our Michelle".

This is either rehearsed ignorance or gee-whizz nonchalance. Either way, the sound you hear is a million pfan hearts breaking.

Her voice lowers to a horrified whisper when talking about one of her first jobs in Hollywood. She played a character called Bombshell in a 1979 TV series spinoff of Animal House.

"Oh my gosh, it was so bad," she says, crossing her eyes for effect.

"And I wore hot pants and high heels, and they had falsies on me out to here. It was just really horrible and, in a way, it was a blessing because I never wanted to go back to that."

No-one came out of that movie looking good, which is why, rumour has it, Brian De Palma didn't want to consider her for the role of Tony Montana's cokehead girlfriend in Scarface.

But she got that role, too, and created her first enduring cinematic image by entering the film in a glass lift, wearing a backless teal dress slit to her hips. She had the right look, and now she was playing a bombshell with substance.

Two movies made her the superstar she insists she never intended to be. In 1989's The Fabulous Baker Boys, she stumbled into Jeff and Beau Bridges' cabaret act as sarcastic call girl Susie Diamond and immortalised herself by rendering Makin' Whoopee atop a grand piano.

In a red dress under a hazy spotlight, Pfeiffer furls and unfurls on the piano as the camera circles her, catching every gorgeous curve but unable to penetrate Susie Diamond's true nature. It was a perfect marriage of actor and character.

Equally iconic was her Catwoman in 1992's Batman Returns. Pfeiffer, vacuum-sealed in a leather suit, played the villain as a fetish gone horribly wrong.

"I started out really just hoping to make a living," she says. "I'm sure a lot of people were surprised that I became famous. It wasn't really my agenda."

Roger Ebert wrote of the Baker Boys: "This is one of the movies they will use as a document, years from now, when they begin to trace the steps by which Pfeiffer became a great star".

And then, phase two.

She is rumoured to have passed on The Silence of the Lambs, Thelma and Louise and Basic Instinct.

She adopted a baby girl and married TV writer/producer David Kelley in 1993, later had a son with him, and made People's beautiful people list six times that decade while turning out subpar movies. After 2002's White Oleander, Pfeiffer dropped out to spend time at home.

There were small roles in Hairspray and Stardust, before Pfeiffer watched as two movies went straight to DVD - both featuring much younger love interests.

Now, she finally has a movie that is all about her, costarring a love interest who is 23 years younger, so she's being a good sport with the media. She's giving interviews about how she hates the predatory tone of the word "cougar".

Her looks, as always, cannot be ignored. And, now playing a legendary beauty confronting society's changing expectations, neither can her age. In one memorable shot in Cheri, the camera holds her face in close-up for a solid 30 seconds. The lighting grows harsher, until her face seems drained, lopsided, alien. Old. Un-Pfeifferlike.

"She seemed quite uniquely qualified" for this role, says Cheri director Stephen Frears. "Her career, her life has been so involved with beauty that it must've been a blessing and a burden."

For her, age is just another contrivance.

"It's on people's minds," she says. "I think people are struggling with the concept of how much do you let go and age gracefully."

How much of Norma Desmond is actually in Michelle Pfeiffer, and what should she let go, and how is she really doing at this precarious point in her career?

So there it is. She's fine, if a bit tired. As for what comes next, there's a potential project. She may do it. (The sound you hear is a million pfans crossing their pfingers.)