From shy kid to child star 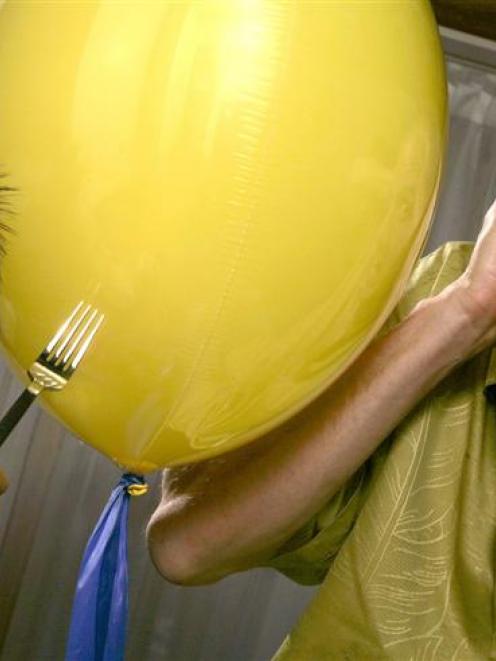 Despite the threat of a loud burst, Jordan Nagai is a quiet kid. But Up director Pete Docter got lines out of him, even when it took some tickling. Photo from LA Times.
Director Pete Docter knew he would have to be resourceful to get shy Jordan Nagai (9) to laugh on cue for his role as a wilderness explorer named Russell in Disney/Pixar's animated Up.

"First, I think we said, 'Think of something really funny, and you kind of went, `Ha, ha, ha'," Docter reminds Jordan.

"I remember at one point, I picked you up upside-down and tickled your tummy and said, `Say the line.' You were really laughing."

There were other times when he needed more energy out of Jordan, especially when the youngster had to repeat a line dozens of times.

"We would come up with games," recalled Docter.

"I would say, 'Jordan, next time before [you say the line], run over there, run around the chair three times, jump up and down three times,' and you would do it. A lot of times that would make you more energetic."

Jordan looks up at Docter: "Yeah," he says in barely a whisper.

Jordan was chosen from about 500 children who auditioned to play Russell, a typically rambunctious 8-year-old who befriends a crotchety, elderly widower named Carl Fredricksen (Ed Asner).

After Carl's wife, Ellie, dies before they had a chance to travel to the legendary Paradise Falls in South America, Carl, who worked with balloons all of his life, attaches thousands of balloons to his house so he can travel to the location.

Russell ends up stowing away in the floating house.

"I don't know if we told you this, Jordan, but in some of the later sessions your voice had gotten a little bit different, so we had to pitch it up to make it a little bit higher so it would match your earlier voice because you are getting big."

Originally, Jordan's older brother, Hunter, was to audition for Russell.

But Jordan, who is 18 months younger, tagged along.

"I have done auditions before for commercials," Jordan said.

While at the session, the casting director asked Jordan to try out.

"You got to go up and say some things about judo," Docter said to Jordan.

"They recorded Jordan here, and they brought the tapes up to Pixar and we listened to like 35 tapes.

As soon as Jordan's voice came on we started smiling because he is appealing and innocent and cute and different from what I was initially thinking."

Initially, Russell was to be more hyper.

In fact, the initial concept was based on the effusive personality of animator Peter Sohn, who was the voice of Emile in Ratatouille.

"But Jordan, you were a little more calm and relaxed about things," said Docter, who also directed Pixar's Monsters, Inc.

"We started to change the character, and that made him more unique and special."

A certain amount of research went into the making of the film.

On wind currents for instance.

Just to see if it would be plausible to make the journey that Carl Fredricksen makes in the film.

Turns out you could float to South America, if you catch one air current to the equator, then hitch a ride on another.

"Of course, the whole thing's a fudge," the director admits.

"The whole idea of being able to steer a house. If you had a balloon lift, and these wings on the side, all it would do is turn around in space. What we try to do is find one or two things that seem real and then lean on those."

One thing the film leans on is the otherworldly South American landscape that Carl sails to.

It's a fanciful place, called Paradise Falls in the film, but based on the real-life canyon lands of Venezuela, where the topography is characterised by towering, flat-topped mountains called tepuis that are separated by deep chasms.

"We said, 'They're so trippy-looking, we better go check this out' because I'm not sure we're really going to be able to capture this if we don't see it first-hand."