Some scares, a little action, many laughs and a lot of zombies 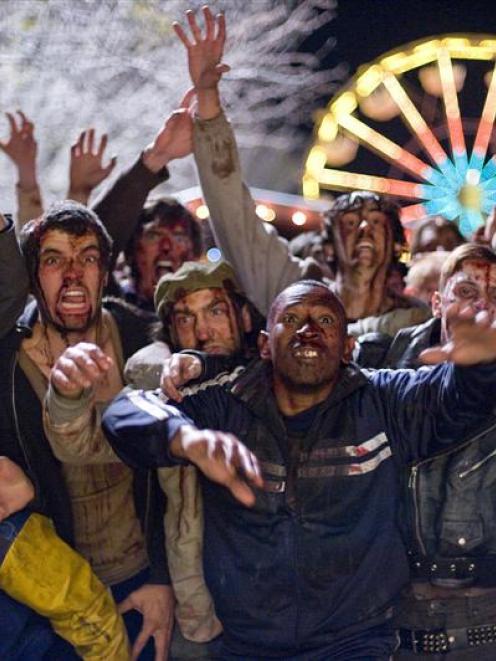 Scene from "zom-com" Zombieland.
Ruben Fleischer didn't think his motion picture directorial debut would involve 45 days of filming disfigured zombies being maimed by a roller coaster, shooting hundreds of bloodied corpses running at full speed or capturing a flesh-eating bride as she lunges at her groom.

Not that that's a bad thing.

"My dream was to get to make a movie and the experience of actually making a movie so far exceeded my dreams of whatever I thought to be possible," said the history major-turned director.

Zombieland takes place in a post-apocalyptic society plagued by the living dead, where Columbus (Jesse Eisenberg), Tallahassee (Woody Harrelson), Wichita (Emma Stone) and Little Rock (Abigail Breslin) are a lone band of survivors who team up and travel across the country, seeking refuge at an amusement park in California they believe to be a zombie-free zone.

"It's one of those things where you have to manage to stay alive and avoid getting eaten by zombies, but other than that there's nothing to do," Fleischer said.

The film, originally meant to be a television series, takes inspiration from Shaun of the Dead, the 2004 British zombie horror/comedy.

"I feel like tonally (Shaun of the Dead) is more of a parody that references a lot of zombie movies that came before it," the director said.

"Zombieland is a zom-com, but it's more American than other zombie movies," he added, likening the film to watching the Superbad guys trying to outrun a bunch of running corpses.

There are some scares, some action and lots of funny in the film between Eisenberg, the coward of the group who carries hand sanitiser with him, Harrelson, a banjo-playing zombie killer obsessed with Twinkies, and Stone and Breslin, sisters trying to survive the zombies and the two guys they're stuck with.

"Zombies are more of a backdrop than the impetus for the relationship (among the characters) itself," Fleischer said.