Together alone in Otago 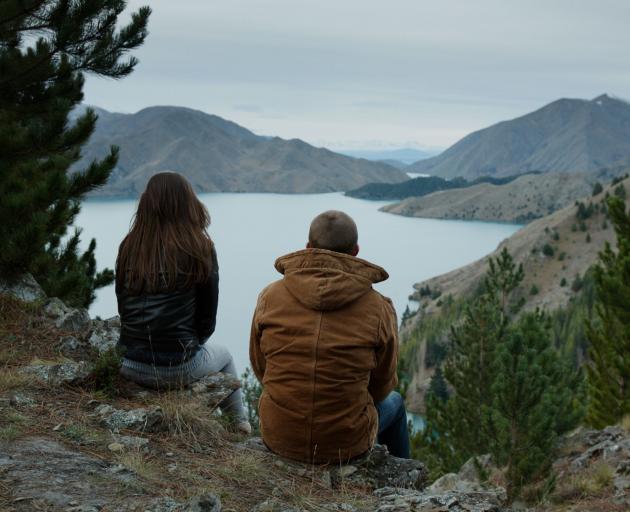 It is obvious from director Dustin Feneley's film Stray that Otago has a serious wilding pine problem.

It is not a film about environmental issues, it's a film about people. But the Otago landscape has a principal role, and the way in which cinematographer Ari Wegner's camera lingers and lingers again provides time for the audience to absorb the surroundings, watch the actors in that setting, and consider what might be done to address the wilding pines that litter frame after frame.

However, that is only when the audience is not utterly absorbed by the uncertain trajectories of Stray's two central characters, Jack and Grace, both recently released from care of one form or another.

In the film, they are brought together by chance and circumstance. In reality, the actors were paired as the result of very deliberate choices.

Auckland-based Feneley looked long and hard for his Jack, a prisoner convicted of a violent crime, newly paroled. It is, after all, the director's first feature film and a project almost 10 years in the making. And Jack's role is so central that, in Feneley's words, the film would have "been stuffed" without a good one.

"We had a thorough and very extensive, long search for the lead. I think I saw, all up, about 200 young guys in the 18 to 26-year-old age group, of all ethnicities."

Kieran Charnock sent in his own video-taped audition, low resolution and raw, but it made the hair stand up on the back of Feneley's neck. He brought Charnock up from Wellington for a full audition, which only confirmed first impressions.

"He just had that X-factor where he was in a different league, even compared to the other shortlisted people."

They thought so too at the Moscow International Film Festival, earlier this year, where Charnock won best actor.

Feneley says Charnock took something of a method approach to the role, asking that he be called by his character's name through the production process, losing weight and working out to look right, working in a factory and talking to prisoners and those on probation so he was entirely prepared.

"He was very ambitious with his preparation so I was very happy for him that he won that award on that big stage. I think that was validating for him," Feneley says.

Opposite Charnock is Kosovo Albanian actor Arta Dobroshi, who made her name in Belgian film Lorna's Silence, and was always at the top of Feneley's wish list.

He sent her a script and a "love letter", implicitly dangling the prospect of a trip to New Zealand, and she signed on.

"The idea was always that [Grace] was a recent immigrant to New Zealand," Feneley explains.

Things have not gone well for Grace and by the film's opening scene she is alone, alienated and friendless in a foreign country, about to be discharged from psychiatric care.

Then, as the film's promotional blurb describes: "These two damaged strangers cross paths in the mountains in winter and fall into a complex intimate relationship, putting to the test their capacity to trust and heal."

"I've always been interested in themes of alienation and connection and people trying to connect with others," Feneley says.

Lonely characters, people on the margins of society, have a fascination.

"At its heart, it's a human film about people wanting to make their lives better and restore themselves in some way."

Otago, with its emptiness, its hills and its wilding pines, is the other big contributor to Stray.

"It's not a dialogue-heavy film by any means," Feneley says in a classic piece of Antipodean understatement. Neither does it carry much in the way of a score.

So Otago and the two actors do all the heavy lifting.

"In my very first kernel of the idea, the images that came to mind years ago for this film, I knew I wanted it to be winter, alpine, mountains. That was very very early on," Feneley says.

Then each year, for the three years leading into the shoot, Feneley travelled down to Otago, hired a car and spent a couple of weeks scouting, taking thousands of photographs. Often that would happen just as the work of producing the film struck another lump in the road, so the trip would provide a timely inspirational fillip.

"I just fell in love with that landscape because it's, like, you can piece it all together so it feels like one place but in fact we shot all over Otago."

The crib where much of the action happens is near Queenstown, but when Jack and Grace go for a walk in the film, they are actually just outside Otematata. A bingo scene is in an Otematata hall, featuring a supporting cast of locals.

Filming in Otago was a strategic decision too, as the southern locations were always going to look significantly more cinematic than something that played out in a Grey Lynn bedroom. In terms of overseas markets, that was an important consideration.

It worked in Moscow, where audiences rolled up. Its New Zealand premiere is tomorrow in Auckland. Then Stray makes its way south.

• Stray screens as part of the Dunedin International Film Festival at the Regent Theatre on August 12 and 13. Director Dustin Feneley will attend both screenings for a Q and A session.

• The festival programme is out now.