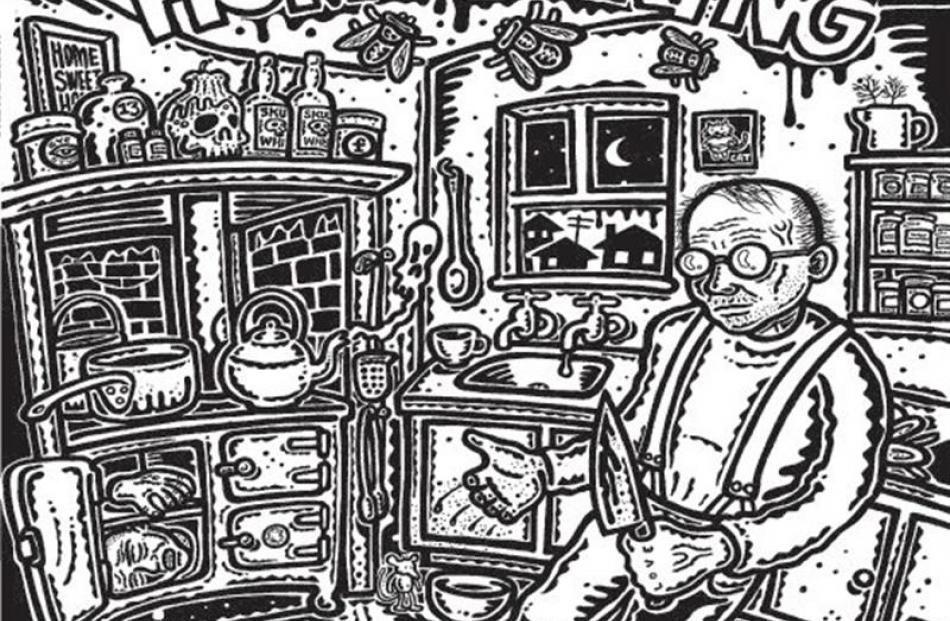 Artwork for the vinyl album cover was done by Glen Ross. 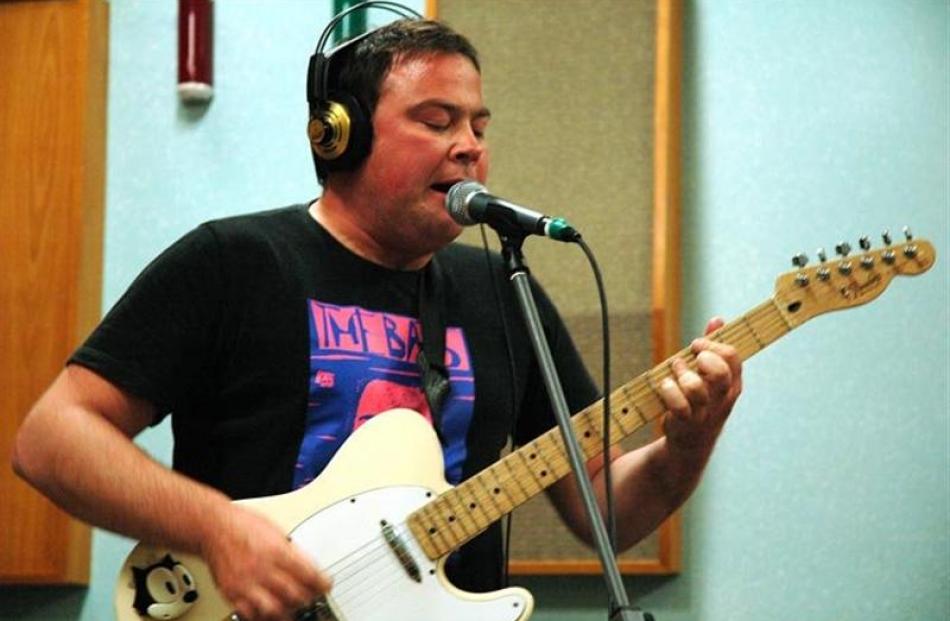 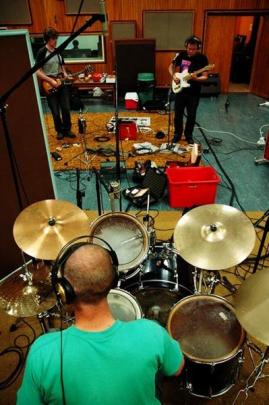 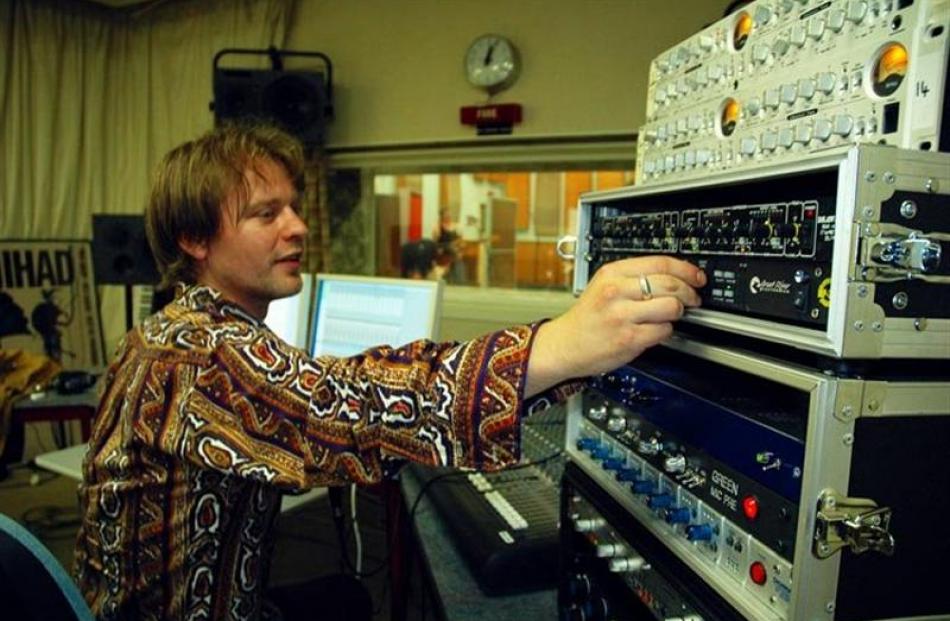 Engineer Thomas Bell on the knobs. 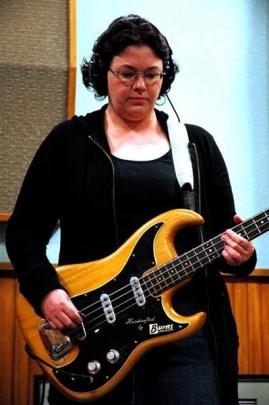 Next week, Dunedin bands Onanon and the Alpha State celebrate the release of new albums. Though they have their obvious differences, they share the faint pulse of those who have gone before, writes Shane Gilchrist.

Onanon guitarist and singer Glen Ross is fizzing like a fuzzbox.

He is just back from a holiday in the United States, a highlight of which was a New York Halloween parade attended by 2 million people, many of whom were dressed to kill.

Not one to disappoint, Ross donned an ice hockey mask, spread on some fake blood and joined the party.

What's this got to do with music? Well, take a listen to Onanon's new album, Home Baking, and things might become clearer.

It's a carnival, though a dark one. Think burnt candyfloss or a toffee apple complete with worm.

It comes in two flavours, too: there's the benevolent-looking CD version with fruit-loaf cover art or a limited edition vinyl pressing boasting a disturbing woodcut print of a suburb about to witness (or sleep through) some horrific night-time act.

Such imagery is not unlike the work of former 3Ds guitarist David Mitchell, which is kind of fitting given Onanon has drawn comparisons with that Dunedin band for a while now.

They quite like the 3Ds, thus such talk is praise. Home Baking is the second album by Onanon, following 2004's Hang On, I'm Still Mutating.

There have also been a couple of EPs, Quarterpack (2002) and Sneepy (2006), from a band that has been round for close to a decade.

All cover a range of moods, from bouncing, guitar-driven pop (albeit of a type unlikely to feature on commercial radio) to unhinged, distorted squalls that reveal a taste for the experimental sonic soundscapes of Port Chalmers outfit the Dead C or Kiwi noise merchants the Gordons.

Though Ross is just one of three songwriters in the band, it is his voice which is most apparent on Home Baking; of the 14 tracks (plus a bonus remix), he sings 10.

With a vocal delivery that conjures an image of a man on the verge of a nervous breakdown, the edginess of Ross is augmented by occasional maelstroms courtesy of Ferns, who is transformed from mild-mannered nice guy to guitar demon with the switch of a distortion pedal.

"I relish it, man," Ross says of his taste for the stranger aspects of life.

"I think Dunedin is a dark place, even in the summer. There is a weird energy here; there is an underlying darkness. That's how it comes out, man. I can do Elvis impressions - or try to - but when I actually try to be real to myself, for better or worse, that's it."

Ross and company didn't waste much time, recording as many tracks as they could over one "pretty full-on" weekend.

"Some of the songs had been around for a while," Ross explains.

"We basically had a couple of practices and Don, Karen and I had an acoustic session to get to the heart of things; it makes you listen to the song more."

Despite that stripped-back session, acoustic guitars are in short supply on Home Baking, although one does feature on the Ferns-penned instrumental Lammerlaw.

"We are all into our guitar bands," Ross says.

"I've always liked feedback, though I don't actually use a distortion pedal. I'm quite a clean player compared to Don. I keep it pretty stripped back because it is dense enough. You need that dynamic to make it work. Don is such a shredder man; he's right into it."

Though Onanon released the CD version of Home Baking on its own imprint, Madfishwish, Monkey Killer Records, set up by Dave Ager, is responsible for the 200 vinyl versions of the album.

"Dave came to us. He'd heard the recordings and has always been a fan. He thought it deserved to go out on vinyl and asked if we were keen. He put the money up for it.

"I'm a vinyl fan so I might be biased, but I think the vinyl sounds fantastic, though I love the CD too, man. I don't know whether it's the way the vinyl has been mastered but, to me, you can hear more in it," Ross says, adding mastering of the vinyl was done at London's famous Abbey Road Studios.

As for the future, Ross says it's business as usual.

Family and work commitments mean regular, extensive tours are unlikely, though shorter forays out of town are being considered.

In the meantime, the songs - twisted, tortured or otherwise - keep coming.

"We catch up once every week or two and have a jam and flesh out some songs, so we'll probably just keep on keeping on."