On the Floor: Orient yourselves 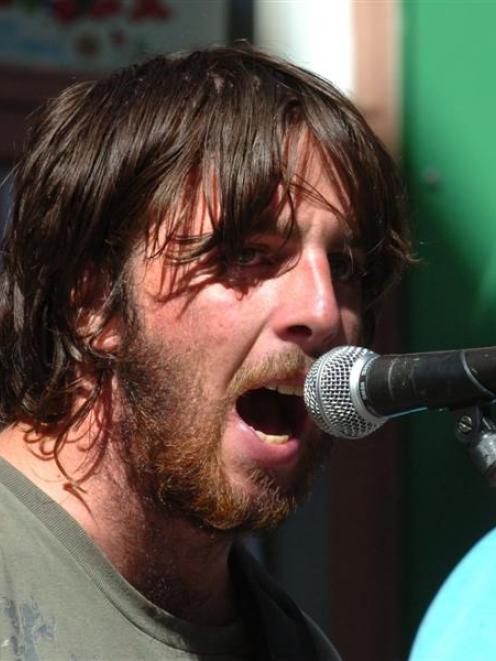 Biff Merchants play at last year's Orientation. Photo by Peter McIntosh.
The students are returning, which means it is Orientation time.

This year the organisers at the Otago University Students Association are promising 10 days of well-mannered frivolity and a host of the country's top bands, starting on Monday.

One of the highlights is an event which has been put together by OUSA and Otago Rugby Football Union. In previous years the rugby union has had bands such as Boney M and The Feelers play before a Carisbrook match, but this year has decided to make a game on the hallowed turf the support act to one of Wellington's best exports: Shihad.

On March 7, the Crusaders will (hopefully) lose spectacularly to the Highlanders, before Shihad invades the House of Pain turf to play a blistering set.

The event is the last biggie for Orientation 2009, and should wrap up Orientation as well as fireworks wrap up Chinese New Year.

OUSA's Orientation begins on February 23, with the infamous Toga Party the following night in the Union Hall. The Thomas Oliver Band and Radio One stalwart DJ Mandriod play.

The Otago Polytechnic Students Association is keeping its Orientation real with the famous egg drop competition, in which contestants have to build a contraption that (hopefully) enables eggs dropped from a polytech building to not be scrambled eggs when meeting the ground at high speed.

Other highlights on the OUSA Orientation programme include a comedy evening with C4 funny man Dai Henwood, and Ben Hurley and Steve Wrigley, on Monday March2.

Fans of shaking their booties should flock to Dunedin College of Education Auditorium on Thursday, February, 26, then to the Union Hall the following night, for the Tour of Dirty, a showcase of Dirty Records artists, including Concord Dawn, Bulletproof, P Money, MC Tiki Taane, PNC and guests.

The major rock gig not at Carisbrook is on March 4 at the Union Hall, when Liam Finn opens for the Mint Chicks.

Some of Dunedin's finest - Sonic Smith, Soul Seller, Knives At Noon, Alpha State and The Biff Merchants - play the main common room of the Union building.

While the Orientation season has the city jam-packed with entertainment, fear not, new student. In this musical city there will be (economic downturn notwithstanding) a variety of gigs to choose from every week, whether it is musical stalwarts such as Robert Scott, Martin Phillipps and the like, or more recent outfits.