It makes one wonder 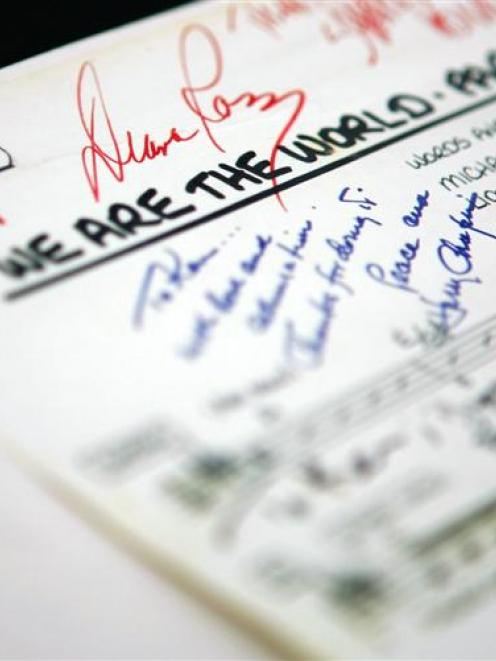 Songsheets for the 1985 recording of We are the World, signed by artists including Diana Ross and Lionel Richie, displayed at a gallery in London. Photo from Getty Images.
You know their songs, but you may not know much more about them than that. They are the one-hit wonders, reports Richard Leiby, of the Washington Post.

Warning: The next sounds you hear may hijack your brain.

"Here's a little song I wrote, you might want to sing it note for note."

"We are the world, we are the children."

The Singing Nun. A classic brain-invader.

"Dominique, nique, nique ..." Make it stop! Actually, we do not pour scorn on these songs, but toast them.

Because, according to Billboard magazine, which is in the thick of a 50th-anniversary celebration of its Hot 100 chart, these songs are among only a dozen that claim a distinction unparalleled in the annals of musical achievement.

They are, by Billboard's determination, the ultimate one-hit wonders.

Or more accurately, those who performed them are the title-holders in a rarefied category: They hit No 1 in their first chart appearance, enjoyed fame and fortune, then never cracked the Hot 100 again.

Some faded into obscurity and live modestly on their royalties. Some still enjoy renown and remain vital artists. There are some sad stories.

The Belgian nun? Alas, Jeanine Deckers, or Sister Smile, as she was sometimes known, forsook her vows, descended into penury and committed suicide in 1985 in a pact with her lesbian lover.

And Soulja Slim, a rapper on the list, was killed in 2003 - shot in front of his home near New Orleans even before his song peaked at No 1.

But before we plumb other odd tales of One-Hit Wonderdom, let's get the Billboard list out of the way, in chronological order, with dates the songs peaked:

Admittedly, we've had little exposure to the last half-dozen except for Bad Day, which grew massive as the drumming-off music on American Idol and is probably destined to be featured in dandruff shampoo and mouthwash commercials forever.

"Does that make me crazy? Maybe I'm crazy."

We hear you asking: Where are the other hits that you, personally, remember - the songs that still glow like embers on the banked fires of memory because they correlate with: (a) That night in the dorm when you made it with (what's her/his name).

(b) Your subsequent wedding to (another person entirely).

Like, what about Norman Greenbaum's Spirit in the Sky, with its Jesus freak ethos and honking fuzzy-reverb hook? How can that not be a one-hit wonder?

Or Der Kommissar from 1982, which made you think you were dancing in a very serious-cool way at a Berlin disco if you squeezed your eyes shut.

And where are the tunes that resonate so odiously you can still taste the cigarette butt you almost swallowed from a nearly empty can of beer, and later, yeah, you totally puked in the driveway.

Seasons in the Sun, Who Let the Dogs Out?: Squinty-eyed hangover music straight from hell's own jukebox.

By the brutal calculus employed by Billboard's research team, many inescapable songs do not qualify as one-hit wonders.

There are near-misses like After the Fire's Der Kommissar (No. 5) and Spirit in the Sky, which hit No 3 on Billboard in 1970 although Greenbaum likes to point out that the song went to No 1 on another national chart, and has hit No 1 three times in England. (It was later covered twice by other artists.)

Why is We Are the World on the list?

"Some people might question USA for Africa," admits Billboard's Fred Bronson, who's covered the chart beat for 16 years.

That fearsome collective of talent, assembled to raise money to combat starvation in 1985, probably would never make another song.

"But it's fair," he says. "Technically, it's a one-hit wonder. With charts it's never black and white; you've got to asterisk things and explain things."

For example, Los del Rio had their No 1 with Macarena (Bayside Boys Mix) in 1996.

But they also got on the charts with another version of Macarena (No 23) and Macarena Christmas (No 57) and so were disqualified.

But wait! There's more: "Pass the dutchie on the left-hand side."

How do musicians follow a monster song that will end up in the first sentence of their obituaries? Maybe they make more. Maybe they give up and make peace with their career apogee.

In literature, Harper Lee never followed up To Kill a Mockingbird.

For an actor, a role can be so indelible that you just have to embrace it: And so it was that Leonard Nimoy eventually accepted his Inner Spock.

"It's a commercial success that has somehow eclipsed everything else that I've been doing," he says.

"It sticks in people's minds, it's a memory that goes down historically. To me it was a pop record, and that's what it was meant to be."

By his count, the song reached No 1 in 14 countries. As the copyright holder, Scott (61) notes: "I did quite well out of it. ... It still generates income, which is great, and it makes it possible for me to explore other areas musically".

He's also an artist and a glider pilot, and recently bought a place in France where he is building a recording studio. Not a bad way to live.

Yet for him the song remains "a two-edged sword: People want to see a formula played out again and again, and that wasn't my interest".

Same dilemma for Greenbaum, now 65 and retired in Northern California. (Living not far, incidentally, from the guy who became famous for Grandma Got Run Over by a Reindeer.) Spirit in the Sky hit No 1 in "practically every country in the world," Greenbaum says proudly, but its legacy is bittersweet.

"That song was so powerful it became evident it was the only thing I could ever do," he says.

"At clubs we'd play that song for over a half-hour. And then they'd want an encore of the same song! I couldn't break away from this. I'd get [creative] mind block. I thought, 'I don't know if I can keep banging my head against the wall.' So for me, it was best that I stop and do something else for while."

He became a chef for a number of years. He kept goats as a hobby. But the song - whose lyrics he wrote in 15 minutes - would not die.

It ended up in 46 movies. It's in a recent Tiger Woods "moon shot" Gatorade commercial.

McFerrin famously shunned Don't Worry, Be Happy, which won a Grammy for song of the year.

But he wouldn't sing it at the awards show, she says, so Billy Crystal did a parody. The tune has seven vocal parts, overdubs that can't be replicated outside the studio, and so cannot be done justice live.

Goldstein also objects to "the sheer ludicrousness of calling Bobby a one-hit wonder," given the scope of his career, which includes conducting major orchestras.

The hits keep coming: "I get knocked down, but I get up again."

"And I scream from the top of my lungs: What's goin' on?"

"Won't you take me to Funkytown?"

• A huge hit can have other consequences besides inflicting there-are-voices-in-my-head miseries upon human beings in the middle of the night.

The Singing Nun, who appeared on The Ed Sullivan Show in 1964, had donated the song's royalties to her order before she left it, but the Belgian tax man caught up with her years later.

Press reports quoted a suicide note she and her lover left before they died from barbiturate overdoses: "Now we go to God. He alone can save us from financial disaster".

The Nebraska duo of Denny Zager and Rick Evans split after In the Year 2525 rocketed around the world in the same summer that Neil Armstrong walked on the moon.

An article in the Omaha World-Herald in 1996 reported that the two hadn't spoken in a decade.

It also described them as "an odd couple from the moment they started playing together": Evidently Zager was more of a folkie and family man, and Evans a partying hippie type.

Another possible reason for the estrangement: The song's publishing rights were held by Evans, who relocated to New Mexico and lived off the royalties.

Zager, still in Nebraska, sells and modifies guitars. (Neither could be reached for comment.) Whatever became of the Heights? It was a Monkees-like band to begin with, created to provide the story line for the Fox TV series of the same name.

The early-1990s show didn't last long, but Jamie Walters, the actor who sang its theme, How Do You Talk to an Angel?, became famous. For a while.

Eventually he switched careers, becoming a firefighter for the Los Angeles Fire Department.

Fifty years ago, Vito Picone and his teenage pals in Staten Island - they hung around the South Beach boardwalk and called themselves the Elegants - crooned their way to the top of charts internationally with Little Star, a song he wrote with a friend who lived across the street, Artie Venosa.

Some of the Elegants are retired, but Picone, its original leader, still performs with Jimmy Mochella, another member.

So is it a great honour to be the very first Billboard one-hit wonder?

"To be saddled with that one-hit wonder thing has really been a thorn in my side."(Back then, an alternative chart, Cashbox, was "the chart that mattered, the bible," he says, and the Elegants not only made No 1 there but had other hits on that list.)

Picone and the Elegants play up to 100 dates a year.

Of course he sings Little Star.

It's a song, a moment, a memory some people will never want to get out of their heads.