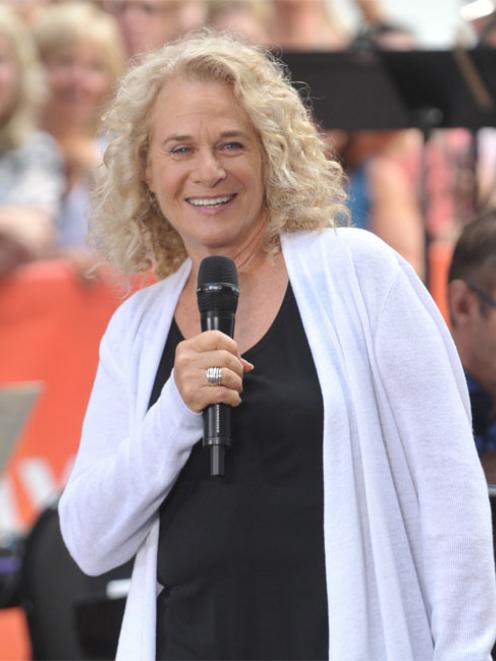 The 74-year-old musician - playing her first concert in the UK for 27 years - was welcomed onto the stage by a video tribute that included messages from Sir Elton John and Tom Hanks as her thousands of fans cheered wildly.

Hanks added: "There wasn't a woman on the planet earth that, sometimes even your mum, who didn't take 'Tapestry' and hold the album to their heart and say, 'This is real.' "

As she performed 1971 LP 'Tapestry', King invited her daughter Louise Goffin - her child with her late ex-husband and songwriting partner Gerry Goffin - out on the stage to duet with her on 'Where You Lead', which has been used as the theme for 'Gilmore Girls'.

Mother and daughter also sang a melancholic version of 'Will You Love Me Tomorrow?' - a track that appeared on 'Tapestry' but was originally written by Gerry Goffin and King for The Shirelles back in 1960.

Acknowledging the 45 years that have passed since the album's original release, King said, "So, this is what 74 looks like ... I'm old but I want you to know I'm OK with it."

As she performed the final song '(You Make Me Feel Like) A Natural Woman' from 'Tapestry', King sang alongside a video of her younger self from 1971.

King returned for an encore of greatest hits, including 'The Loco-Motion', the 1962 hit first made famous by Little Eva, and 'I Feel The Earth Move', for which she was joined by the cast of 'Beautiful - The Carole King Musical' on vocals.

King warmly embraced actress Cassidy Janson - who plays her in the show at the Aldwych Theatre - before the cast left the stage.

For her final song, King performed 'You've Got A Friend' for a second time but changing the lyrics for the London crowd.

She sang: "Thanks for coming out to see me. And thanks for welcoming my friends and family. I love you London. Thank you London. You've got a friend."

King's set was watched by a host of stars including One Direction's Niall Horan, Suki Waterhouse, Georgia May Jagger and her sister Lizzie Jagger, Dominic Cooper, Kelly Jones, Mel C and Will Young.