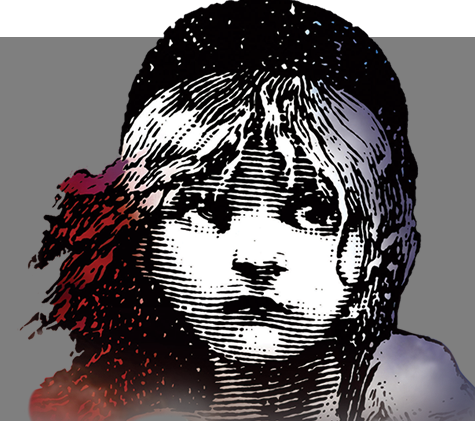 With direction by Stephen Robertson, Michael Grant, Heidi Hayward and Richard Marrett, who conducted the 15-piece orchestra, a brilliant production of Victor Hugo’s classic tale (1862) unfolded as the various characters became caught up in the violence of political unrest, passion and tragedy.

This was a mammoth show. Big, bold and spectacular applied to everything. A big stage and set with big sound and lighting, massively dramatic choreography.

There were no weak moments and the large opening night audience experienced the full gamut of emotions. The orchestral sound was mixed to replicate a large symphony orchestra, and amplification of 30 experienced ensemble members taking minor roles maintained balance with the principals.

James Adams excelled as ex-convict Valjean with Bring Him Home, matched by Greg McLeod, playing a cruel revengeful Javert. Both seasoned performers have vocal strengths and the ability to totally immerse in their character roles; they set the bar high for the entire cast.

Scott Bezett, as Enjolras, was outstanding with baritone intensity and stature as he led the student rebels at the barricade with Do You Hear the People Sing?.

The visual and sound effects were totally believable, especially flashes of light and lots of ‘‘smoke’’ accompanying loud gunfire in the battle scenes.

A vocal highlight was Ben Thomas (Marius) singing the agonising tribute to those who died on the barricades, Empty Chairs and Empty Tables.

Lara Davidson played Cosette with great sincerity (Castle on a Cloud). Anna Langford (Eponine) and Janine Weatherly (Fantine) were also totally convincing in their roles and solos, On My Own and I Dreamed a Dream.

Some humour came with the roles Thenardier (Chris Hinch) and Madame Thenardier (Harriet Moir) in their duet Master of the House, gatecrashing the wedding and stealing the cake.

Gavroche, the brave child who dies at the barricade, is played by Felix Kamo (who excelled on opening night) and Lucas McLeod.

This passionate musical with outstanding local cast continues until May 15.