"Members'' of Strork rehearse for their Fringe Festival concert. PHOTO: GREGOR RICHARDSON
What happens when you get a group of people with varying musical abilities together and simply let them play? That’s the question behind Strork, a Dunedin string orchestra that is anything but traditional.

Rebecca Fox talks to Alan Starrat before the group’s performance at the Dunedin Fringe Festival.One night at a warehouse party in Dunedin, Alan Starrat brought along his string instruments and encouraged everyone to have a go.

Little did he know that random act would lead to the creation of an "orchestra" of sorts, or that 25 years later the group, which became known as Strork, would still be playing.

Strork follows few, if any, of the conventions of a traditional string orchestra.

Firstly, it meets at random times and at random places. Secondly, its membership changes at each performance. And thirdly, its mandate is to play improvised, rather than sheet, music.

"We soon had a pool of players who would show up. There are no big expectations, but Irish jigs don’t fit."

There are no constraints due to ability. Players can be beginners, people who have not played since they were a child or professionals.

The only real "rules", says Starrat, are that people must play either the violin, viola, cello or double bass and they need three players to get started.

That is not a problem for Starrat who, for 33 years, played with the Dunedin Symphony Orchestra, much of that time as principal viola.

Starrat, who moved to New Zealand from the United States in 1984, is a classically-trained violinist and pianist who has a master’s degree in viola.

Unlike many classical musicians, Starrat had one goal in life - to play as many different styles of music as possible on the violin.

Back in the late 1980s, violins were usually only seen in classical, folk or country music, so he made a real effort to change this, first playing in a rock band and then a reggae band for a time. 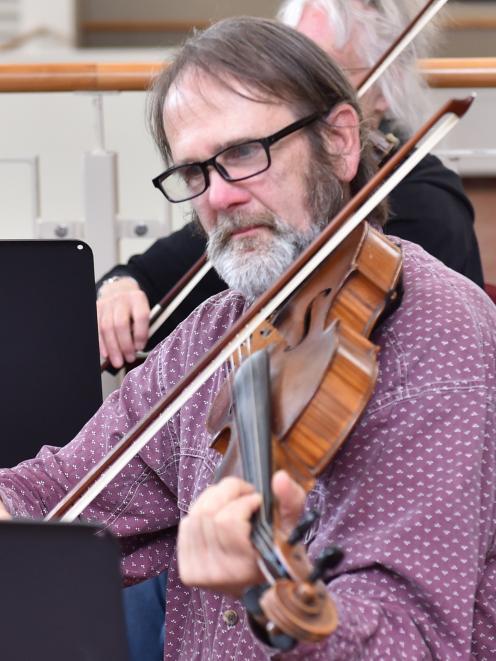 Alan Starratt has one goal in life - to play as many different styles of music as possible on the violin. PHOTO: GREGOR RICHARDSON
However, he has now pulled back from his commitment with the DSO to enable him to do other things.

"I think I’d had enough. There was too much Beethoven and Mozart for me."

Strork and its revolving group of players has been one of his pet projects over the years.

Each player explores their instrument in their own way, sometimes listening to what others are playing around them, sometimes ignoring them completely.

"We just let loose and try out new things. It can sound a lot like contemporary music from the ’40s and ’50s, but we’re just making it up. It’s a coincidence more than anything."

Over the years, they have had the odd performance at the Dunedin Public Art Gallery, First Church and St Paul's and at various arts and fringe festivals where they mix improvisation and "organised" music.

On those occasions, Starrat has written music for the group - taking into consideration that some cannot read music and others are a bit rusty.

At this year’s Dunedin Fringe Festival, he has brought in compositions from two lesser-known Dunedin composers - Corwin Newall and Tom Jensen.

"They have very different styles of music."

Newall’s will see the "orchestra" following images on a video screen, which is a "very unique way" to play music, while Jensen’s is based on standard notation.

They have also invited musicians from the DSO, community orchestra and youth orchestra to take part.

"We’ve taken the basic group from Strork and added a lot to it - hence the name of the show is Augmented Strork."

In each performance, the group will be made up of musicians of varying levels all coming together.

"A lot of the invited musicians will not have improvised before."

Some of the musicians may "sit out" the improvised parts if they are not comfortable, just as some Strork members may sit out the more formal pieces.

Even Starrat admits going from improvisation to following sheet music is not easy.

"It’s a whole other way of thinking."

The group does give themselves some boundaries to ensure each improvised piece is different, deciding on a theme or concept before they start.

Starrat will often sit back and see what happens when the music begins and then add in a melody or an effect.

The group will also incorporate freestyle dancers into the performances, with Ali East leading a small group.

"They’ll do what they want to do and we connect on some level sometimes. When that happens we play off each other."

Due to the nature of the group, Starrat has no idea who will be there for each performance, although he is pretty sure there should be seven or eight first violinists and the same number of seconds, four or five violists, three cellists and he is hopeful of two double bassists.

"I can’t predict totally what is going to happen and who’ll be in attendance. I’m hoping it will be a full group."