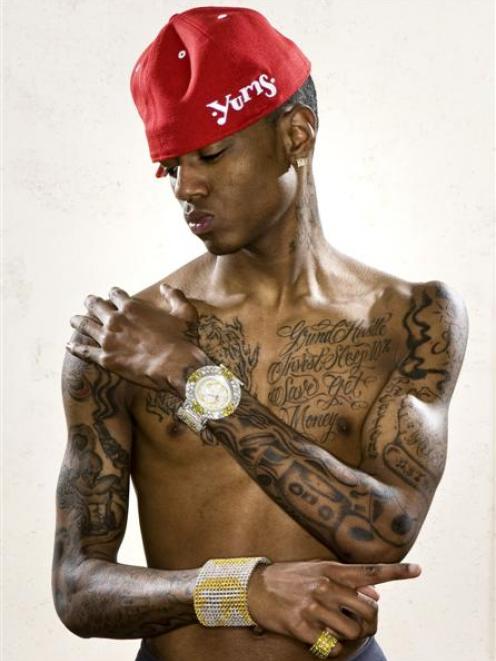 Photo by Los Angeles Times
Soulja Boy harbours no ill will towards his haters. Not even the ones who since his 2007 debut album, Souljaboytellem.com, have been loudly, and with almost numbing constancy, calling for the death of the rapper-producer's career.

He incurred the wrath of an angry hip-hop nation after the meteoric success of his breakthrough single, Crank That (Soulja Boy), a by turns menacing and minimalist pop confection that seemed to capture the zeitgeist two years ago.

It spent eight weeks atop the US national singles chart, resulting in 5.5 million digital downloads and three million ring-tone sales.

Then came the negativity.

Ice-T, the gangsta rapper turned co-star of Law & Order: Special Victims Unit, accused the rapper, via a 2008 mix-tape, of having "single-handedly killed hip-hop" and castigated Crank That as "garbage".

Similarly, Snoop Dogg derided Soulja Boy as a "bubble-gum rapper" and dismissed his music with a barnyard epithet in radio interviews.

As well, various critics and bloggers called him a one-hit wonder, criticising the virally popular Superman dance Soulja Boy pioneered as "a modern-day minstrel show" and denouncing him as "the new MC Hammer".

"I got a lot of backlash. Me being from a real bad neighbourhood and, at 16, becoming a millionaire off one song," Soulja Boy, formerly from Atlanta, said from his downtown Los Angeles apartment, where he has been living since December.

"Some people felt it came too easy. Like things I done in that amount of time they couldn't do in their entire careers."

The rapper, now 18, said he's content to let the facts speak for themselves.

Chief talking point: His new single, Kiss Me Thru the Phone (featuring Sammie), reached No 3 on the US Billboard Hot 100 and No 1 on the Hot Rap Tracks chart; it has gained steady momentum to claim a place among the top five singles in rotation on pop and urban radio since its release in November.

Meanwhile, Turn My Swag On, the second single from Soulja Boy's sophomore CD iSouljaBoyTellem, is among the top 10 songs on urban radio.

In other words, he's a one-hit wonder no more.

"When I went into the studio to record my second album, everybody wanted to see me fail," he said.

"At this point, I'm thinking: `I'm not going to do it to prove them wrong. I'm going to do it for myself, for my fans, for history, period. People are saying I'm the new MC Hammer? That's not me'."

These days, plenty of hip-hop grandees are clamouring to work with Soulja Boy, who began posting songs to his MySpace page as a lark and said he never expected rap superstardom.

Since Kiss Me Thru the Phone began to peak, he has recorded songs with multi-platinum-selling artists, including Usher and crunk hit-maker Lil Jon.

Kelly and Young Jeezy are lining up to record with him.

"After the first album, I'm not going to lie, there was no artists that reached out," he said.

"Now I have more hits, more rank and pull. Everything is changing."

For all its controversy, Crank That boasts an unimpeachable 400 million YouTube views - one of the most reliable bellwethers of popularity in pop culture.

"I always knew I was going to get the last laugh," he said.