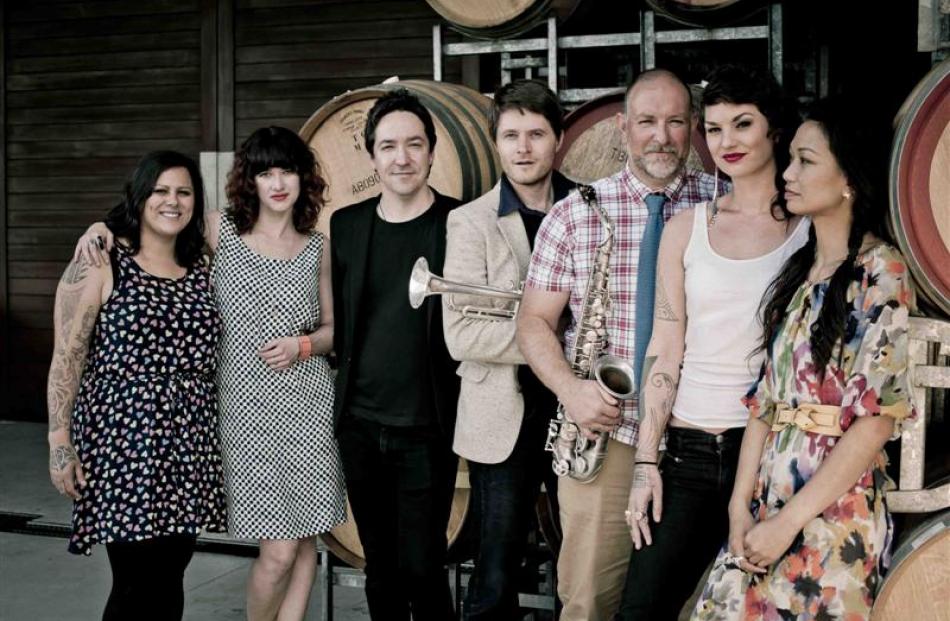 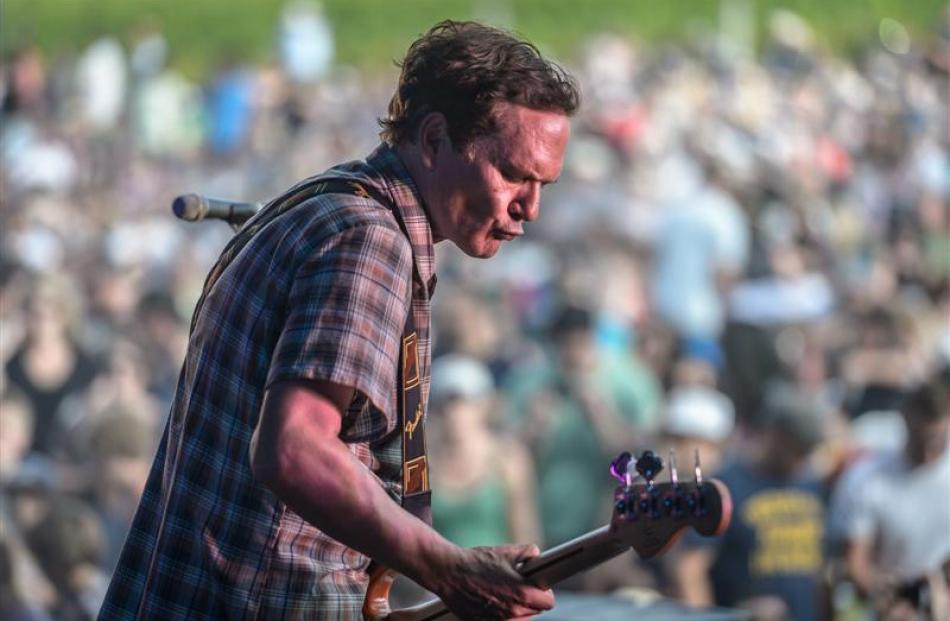 Shayne Carter plays to the crowd at Matakana. Photo by Steve Dykes. 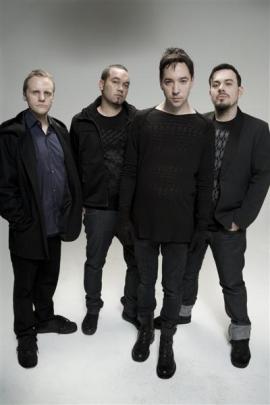 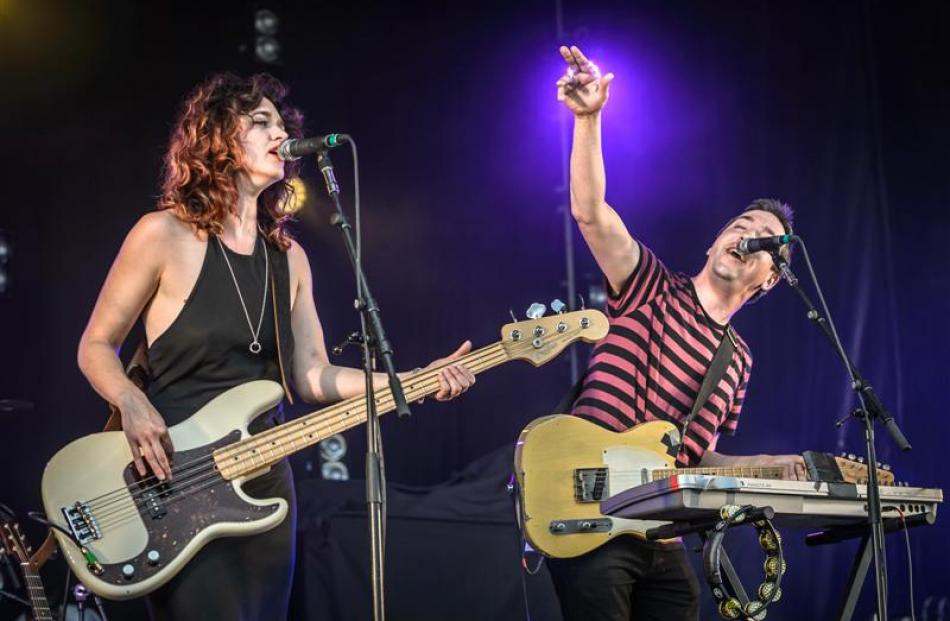 Jon Toogood and Julia Deans perform as the Adults at Matakana. Photo by Steve Dykes.

Jon Toogood is enjoying life as a musical chameleon. Shane Gilchrist discusses Shihad, showmanship and new outfit the Adults with the enduring artist.

Jon Toogood might confess to feeling a little tired after a late night out in Hawkes Bay with members of Fat Freddy's Drop and others, but there seems to be a process of personal reinvention running parallel to any frivolity.

Best known for his 22 years (and counting) of work with New Zealand heavy rock group Shihad, Toogood is now on tour with another outfit, The Adults, a band that also boasts the pedigree of Shayne Carter (Straitjacket Fits, Dimmer) and Julia Deans (Fur Patrol).

Along with the Fat Freddy's crew and Anika (Moa), Boh (Runga) and Hollie (Smith), Toogood and company perform at Dunedin's Forsyth Barr Stadium tomorrow and Waitiri Creek, Gibbston, on Tuesday, February 19, as part of the Classic Hits Winery Tour.

Toogood, speaking from Napier last week on the morning of the fifth concert of the 17-date trek, says he has been enjoying travelling with some old friends and seeing some of the more beautiful parts of the country, but more significant has been his inner journey.

''That's what the past two years have been about for me. I really wanted to look outside the way I had made music and see how other people do it.

''The Adults is really fun. It is such a different approach. With Shihad, it is a machine. Don't get me wrong, I love it - it's like riding a dragon. But with the Adults, you have male and female voices, a lot of harmonising, which we hardly do in Shihad.

''That said, when I go back to Shihad I totally appreciate how huge that band sounds. And by doing all this other stuff it means I can enjoy what I do with Shihad even more,'' Toogood (41) enthuses.

''Getting a live unit together that includes Shayne Carter ... well, he was my hero when I was younger. I saw Straitjacket Fits when I was a young guy in Shihad and I thought, `Wow, this guy is a rock star in his own right'. His band came from a totally different background from us.

''Then you have Julia Deans, who is a great songwriter and an amazing performer - and is a mean bass player as well.''

The fact that all three are lead singers, band leaders even, is not lost on Toogood. However, the shared responsibility has been welcomed by everyone, he says.

''We describe the Adults as being like a V8; there is a lot of power there, but it's idling.''

Nothing to Lose, an early single by the band, is a good example: featuring Ladi6, aka Karoline Tamati, on lead vocals, its taut bass line and metronomic drums offer a constant bedrock that only changes towards the end of the track when a blistering guitar line by Carter drops in only to quickly diminish. It's an exercise in restraint.

''I think one of the reasons I wanted to play with Shayne is because I was a massive fan of what he did with Dimmer, particularly that first album. It was like he was saying, `Don't get cocky - if I want to let loose I'll run you over'.''

Having spent more than two decades fronting Shihad, a band that has released eight studio albums and eight EPs and was inducted into the New Zealand Music Hall of Fame in 2010, Toogood took the first tentative steps towards forming the Adults a couple of years ago.

''I had a bit of down time from Shihad, but am one of those guys who is constantly writing songs - that's what I do. Instead of playing the Xbox, I play music. But I had this huge amount of material that just wasn't right for Shihad.

''Originally, I thought I would just get various musicians who I could jam with. I had a long list of drummers, because I think if you don't have a good drummer you don't have a good band. Then, as soon as I started jamming with other people, I forgot my ambitions. What I was writing with other people was so much more interesting than what I was writing by myself.

''I started jamming with Julia, who was living just down the road from me in Melbourne,'' Toogood recalls, adding the pair came up with Anniversary Day and Every Day I Wake Up, both of which made it on to the Adults' self-titled debut album, released in 2011.

Toogood might have begun his musical career as a metal-head, but these days his tastes incorporate material of a more electronic nature. Part of the reason he likes such elements is because he is relatively unfamiliar with its construction.

''I don't know how it is made. That has magic to me. It's like when I heard AC/DC as a kid; I had no idea what it was but I wanted to know how they did it.

''Now, because I have spent a lot of my life around guitars, I do know how AC/DC did it. But I like to be challenged, so it was good to attempt something I had no idea how to do. That means I can lose myself in it without worrying about the technicalities of it.

''When Shihad records, there is a lot of layering, getting everything absolutely perfect. It's a process that takes a very long time. So I wanted to do the opposite, to just turn things on and off.''

Yet there is a thread that binds Toogood's latest work with that of his other, long-time band. Shihad has long been noted for a work ethic that requires each member to front up and give it their all, regardless of whether they are playing to 10 people or 10,000.

''Even though the Adults' music has its mellow moments, we still bring a lot of passion to it. It is really important to us. It is what we have chosen to do with our lives. You want to get better and better, not go backwards.

''There is one song we do, Short Change, which has a Curtis Mayfield vibe to it; it's a really smoking blues track that gets large. That's the stuff audiences are drawn to, because they are seeing something that is really exciting.

''The approach is no different to Shihad.''

On the subject of Shihad, Toogood says the heavy rock band is still in good heart and looking forward to supporting Black Sabbath on its tour of New Zealand and Australia in April. After that, there are plans to begin a new album with Jaz Coleman (Killing Joke), the Auckland-based producer responsible for Shihad's 1993 debut album Churn.

Toogood has also stretched his wings to theatre, performing in the Michael Hurst-directed musical play Brel last year. Along with Deans, singer-songwriter Tama Waipara and Jennifer Ward-Lealand, Toogood was required to interpret the ''musical genius'' of the French singer-songwriter, Jacques Brel.

''I got called up about five weeks before it was due to start. I wasn't really that aware of Jacques Brel, but he was like the Iggy Pop of '50s French music. He was amazing.''

According to reviews, so was the show.

''People were literally crying, then laughing then stamping their feet,'' Toogood says.

''Every night was different even though the material was the same. I'd do it again in a heartbeat.''

Combine a play about a relatively obscure French songwriter, the Adults' album and that outfit's collaboration last year with the Christchurch Symphony Orchestra (the result of which was a live album) and a picture emerges of a man who has reached a point in his life where he is embracing a range of creative opportunities.

''I feel like I've been liberated, really,'' Toogood agrees.

''But the only thing holding me back was myself.

''I had all these ideas and kept relating them to Shihad. I am a very career-oriented guy and have been with Shihad since the age of 17 or 18. It was hard work but it was also safe in a way.

''The Adults have taught me that, at some stage, it's OK to let go of the reins and let others with talent do their thing. You can just watch and learn.''