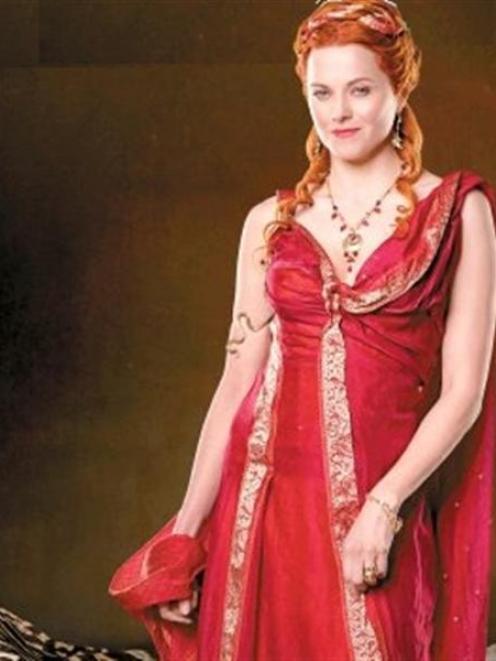 In titling its new series Spartacus: Blood and Sand, the Starz Network cannot be accused of false advertising.

There is blood, and lots of it - buckets of it, waves of it, seas of digitally enhanced candy-apple-red comic-book gore, spilling, spurting, hurtling across and towards the screen as bodies are stabbed, slashed, sledgehammered and variously dismembered.

There is sand too, but you don't notice that so much.

From executive producers Robert Tapert and Sam Raimi, this long-form, adults-only retelling of the story of the Thracian slave-turned-gladiator (Andy Whitfield) who led a revolt against the Romans back in, oh, some years ago, plays as a more serious, more salacious cousin to the pair's whimsical Hercules: The Legendary Journeys and Xena: Warrior Princess.

When I say "serious," I mean that it is not a lot of laughs, not that it engages any profound or complex issues.

You've seen this before - the decadence of the Romans set against the humble life of lusty village folk who wish only to be left alone to make more village folk, but who all the while must defend themselves from this empire or that barbarian horde.

The series, which begins on Sunday night, might be described as, in no particular order, a mix of 300, Mad Max: Beyond Thunderdome, Fight Club, Caligula, Rome, Gladiator, the 1960 Stanley Kubrick Spartacus and any number of boxing or you're-in-the-army-now pictures, with Lucy Lawless, half-naked and talking dirty, as the cherry on top.

So obviously heady is this combination, so guaranteed to enslave a certain sort of fanboy/fangirl that the network ordered a second season before its 13-episode first had even begun.

And, really, Lucy Lawless half-naked and talking dirty probably could have got that job done on its own.

If the show's concerns do not rise far above the level of pulp - and there is nothing wrong with that - it does what it does with a sure hand.

The computer-generated effects can look a little fake, but looking a little fake is part of this particular aesthetic, born of video games and comic-book panels, sort of the way that synthesizers were preferable to pianos in '80s pop.

Similarly, the fight scenes - which involve lots of slow motion, the better to show the deforming impact of steel or flesh on flesh - should not be taken as more "real" simply because they're more brutal.

They are comic-book bouts set to heavy-metal guitar and loud thumping noises.

Lawless - who was, I suppose I should point out, the Warrior Princess Xena - is not as well-employed here as she was on Battlestar Galactica, but she vamps quite nicely as the ambitious wife of the owner of a school for gladiators; it is as layered a performance as you could possibly require.

As her husband, Scottish actor John Hannah (Four Weddings and a Funeral, the Mummy movies) keeps the show grounded with a persuasive portrait of a man engaged in a stressful daily business.

Whitfield is very good as Spartacus, handsome and buff and smart and beastly.

Erin Cummings plays Sura, the wife to whom he longs to return - early in the tale, against a lovely digital sunrise, she packs him off to fight barbarians with the loving commandment: "Kill them all". ("For you," he returns.) Given that Spartacus does not stumble in what it sets out to do, one's objections to the show, if objections one has, will be moral, or simple matters of taste, to the extent that those two concerns can actually be separated.

It is a little bloody for my taste, personally.

Still, in between the rumbles in the arena and the rumbles in the bedroom, it's a fairly talky show, the dialogue seasoned with word inversions that signify the classical world to the modern ear - "What purpose requires it?" and such.

So if you are here just to get a look at Lawless' breasts or Whitfield's behind, or any number of other breasts and behinds, you will have to be a little patient, but your patience will be rewarded.