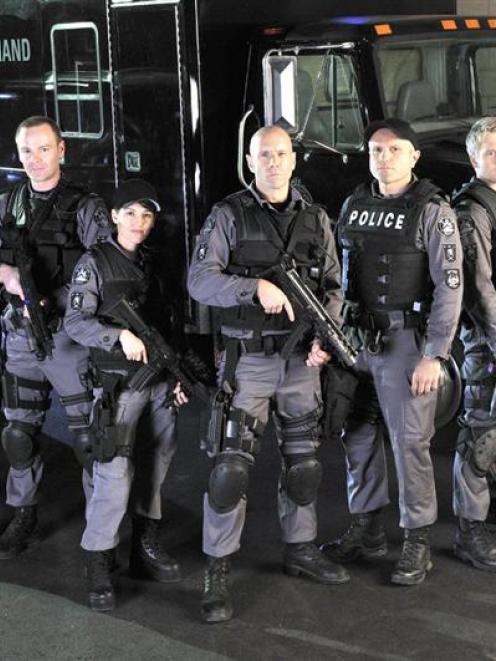 Television executives sensed a crying need for more of the same old thing, and here it is: Flashpoint, the story of a lovable SWAT team going righteously about its business in a big North American city.

That city would be Toronto, where the series is filmed, although little attempt is made to pinpoint a location.

It's just supposed to be Anytown, USA, where cops struggle nobly against the usual suspects and assorted forces of evil.

In an online promotional spot, one of the producers says the show is concerned with "the toll that it takes to be a hero every day".

Every day? That seems extreme, even for a fantasy.

In tomorrow night's premiere, heroism is defined by the team's resident sniper going about his business from the rooftop of a downtown office building.

Far below, a crazed Croatian, for reasons not delineated, has taken a woman hostage, pressing a gun to her head and babbling hysterically in his native tongue, which nobody at the scene speaks.

We're in the dark, along with the cops.

But we do get the lowdown on sniper angst, as experienced by Hugh Dillon as Ed Lane, a quiet and tightly-wound sort of guy with a rock-steady grip and, his only hint at a flaw, a questionable sense of timing.

To reveal more plot details would perhaps be unfair, especially because there aren't many.

The show is another victory for style over substance, slickly visual but essentially empty.

The tension one would expect from a hostage situation is oddly slack.

The director cuts perfunctorily among the various points of view, with the central focus being Enrico Colantoni (a Robert Duvall look-alike) as Sergeant Gregory Parker.

His negotiation with the lunatic consists mainly of saying "Put the gun down" over and over, with the gunman shouting back in Croatian.

To stack the deck, the producers have made him the meanest Croatian in all creation, a snarling and even growling monster who certainly has a thing or two to learn about manners.

The police, however, are exemplary in their every movement and gesture, and that would include Amy Jo Johnson as Julianna "Jules" Callaghan, the "Perky Girl" of the group who keeps perking, even after running up 12 flights of stairs to a dead end.

They're all happy in their work, but Callaghan is ecstatic.

The attempts at bonhomie and bouncy banter are lame, and getting to know the members of the team proves considerably less than a privilege.

Making matters worse is the arrival of David Paetkau as novice Sam Braddock, the cocky, over-confident kid who walks into the hostage situation on his first day with the force.

If it had something truly new or provocative to say, the essential redundancy of Flashpoint could be overlooked, but it hasn't, so it can't.

The good guys are too good for their own good.