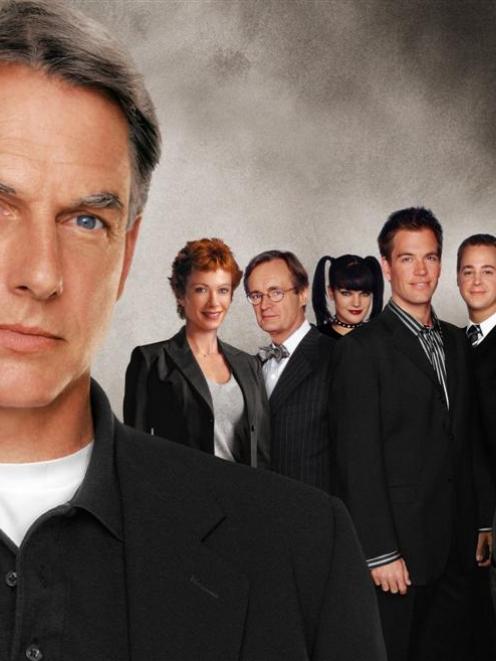 'NCIS' is still going strong, more than a year after a rift between star Mark Harmon (left) and co-creator Don Bellisario threatened the show.
By spring 2007, CBS drama NCIS looked to have run out of luck.

The show, about a team of special agents who investigate US Navy crimes, had become a stalwart of the CBS line-up, even though it never attracted the media buzz enjoyed by many less popular shows.

But a poisonous rift with star Mark Harmon led to the sudden and unceremonious departure of co-creator Don Bellisario, who happens to be one of the most successful producers in TV history (his credits include Magnum, P. I. and Quantum Leap).

For a series that was then winding up its fourth season, such a development seemed destined to hasten a creative and ratings decline.

This season, only CSI: Crime Scene Investigation and Dancing with the Stars have bigger audiences.

While most hits begin to fade by their sixth season, NCIS has new growth.

"We've had changes in front of the camera [and] behind the camera," Harmon said in a telephone interview.

"And if you look at the result, I think in all cases we've gotten better."

NCIS is one of those go-figure success stories. All sorts of theories profess to explain why the show has kept growing.

Yet more intriguing are the counter-arguments - all the reasons NCIS shouldn't work as well it does.

Which are: The media try very hard to ignore the show. Producers realise it doesn't perform as well in New York and Los Angeles as it does in smaller markets, perhaps because the series started as a spinoff of JAG, a popular CBS military crime drama (and Bellisario creation) that some critics found jingoistic.

Moreover, NCIS has had a parade of cast changes, including abrupt exits by co-stars Sasha Alexander (whose character was felled by a sniper's bullet at the end of season two) and Lauren Holly (dispatched in a gun battle in the fifth-season finale).

And then there's the competition. Between January and May in the US, NCIS airs opposite Fox's American Idol, the No 1 show on television. That sort of scheduling could give any drama a ready excuse for failure.

For one thing, the series has bucked TV's trend towards serialised storytelling which, while popular with hard-core fans and many critics, requires more dedication from viewers.

Also, the producers have spent more time in the past two seasons filling in gaps in the characters' personal lives.

"Early on, it was kind of a show that moved very fast and had quick editing and a sort of staccato pace," executive producer Charles Johnson said.

"I think in the last year or two, we've slowed it down and went, `OK . . . we also want to try and get you to know these people a little better'."

But certainly another key to the endurance of NCIS lies in what happened at the end of season four, when news of a feud between Harmon and Bellisario began leaking into the media.

That's not quite how Bellisario saw it.

The veteran producer said that during fourth-season production he asked Harmon to reshoot a scene.

"He re-did it exactly the same way he did it the first time and never spoke to me again."

He blamed Harmon and his handlers for a "full-blown PR campaign" of anonymous leaks about allegedly bad on-set working conditions.

According to Bellisario, CBS soon told him it wanted him to quit NCIS and work on developing something else.

His name remains on NCIS as co-creator and executive producer, but he has no daily involvement with the show.

Harmon sees that as a change for the better.

"If we're working 14-hour days now instead of the 17- or 18-hour days that we were doing, it doesn't mean we're working any less hard," he said. "We're just more organised . . . This has become a very well-oiled machine."

Feuds between producers and talent are nothing new, of course, but how they are resolved can ultimately spell the difference between success and failure.

In the case of NCIS, CBS not only sided with its star, it also chose a course that promised the most stability for a show that had turned into an important asset.

With the new pair taking over, the series could keep its star and not miss a beat. Unfortunately, Bellisario became collateral damage.

And given how NCIS has thrived since that time, it's clear that, in terms of pure survival, network executives' instincts were correct, even if justice was not necessarily meted out.