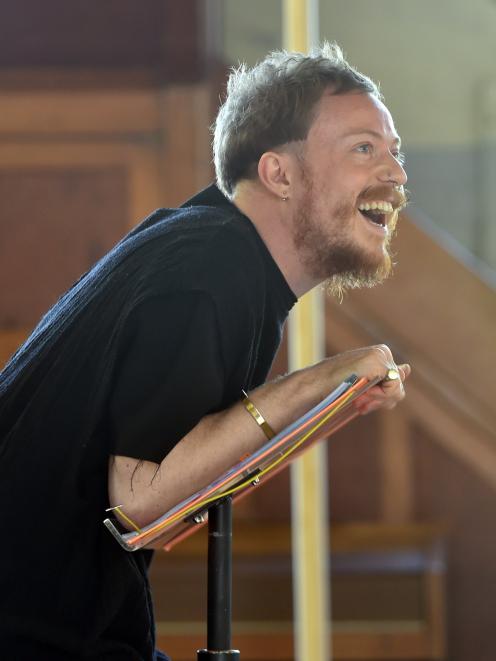 Auckland director Benjamin Henson in rehearsal for the Fortune Theatre’s production of Twelfth Night. Photo: Peter McIntosh
He is braving a Dunedin winter to bring a modern taken on Shakespeare to the city’s audiences. Benjamin Henson tells Rebecca Fox about putting on a raucous party.

Benjamin Henson is promising to challenge people's preconceptions of Shakespeare.

''By the time this comes up to scratch I think most people will forget it is Shakespeare ... [or] their idea of Shakespeare,'' the Auckland director says of the production of Twelfth Night that opens next week.

It is a return to Shakespeare for the Fortune and the first outing for the theatre's ''Company''.

The ''Company'' is a group of top New Zealand actors selected by the Fortune to form the base cast of Twelfth Night and its upcoming production of Into the Woods.

For Henson this is a bonus, to have a group of actors coming together for two and a-half months.

He is watching them come together, develop a rapport and trust in each other.

''They are having a great time. It's a joy to see them having a good time with each other.''

Originally from Leicester in the East Midlands, Henson came to New Zealand in 2010 with his New Zealand partner and settled in Auckland.

He had been working in the London theatre scene and teaching after discovering a penchant for directing while working with troubled youth.

It was while taking 60 teenagers to the Edinburgh Fringe Festival, where they had to perform in six shows, that he realised ''the whole time I had been directing''.

The appeal of directing is in helping the actors tell stories, Henson says.

''The actors do amazing things I never could. It's the best job in the world. I get to sit here and be entertained.

''Sometimes I throw things at them and shout, but I'm soon easily won over and all is forgiven.''

Since coming to New Zealand, he has found plenty of work and enjoyed the collaborative nature of the country's theatre scene.

''In New Zealand they're so supportive, so chuffed it's [theatre] happening at all.''

It was in stark contrast to the United Kingdom, where if someone discovered a great lighting person or venue they kept it to themselves.

''Here everyone helps you out.''

Henson has also kept up his teaching, doing directing workshops and actor programmes.

''Your ultimate role [as a director] is to help actors bloom in a role, which is exactly the same thing if you are teaching young actors.''

Being able to understand what an individual needs is the director's art.

It can be a nightmare to be an actor: in this case they have 21 days to get a Shakespeare production up.

''The demand on actors is super-high before they've even got to the floor,'' he says.

While he has not had ''massive'' experience with Shakespeare, he is not a novice. His previous shows include a three-person Pericles, Prince of Tyre.

''Having three people do Pericles is almost impossible but that was the joy in it.''

For Henson, the structure of Shakespeare gives him plenty of ''freedom and licence'' to be ''naughty''.

Shakespeare included many ''pop culture'' references in his work, so Henson has ''whipped out'' the Elizabethan references and replaced them with contemporary equivalents.

Henson has also directed Titus Andronicus, first as a Unitech graduate show, then at Q Theatre in Auckland and most recently at the Pop-up Globe.

''It was great. I loved that play. I had a steel band and Beyonce songs.''

That was topped by The Tempest, starring Lisa Harrow in a Auckland University Summer Shakespeare production.

It was an amazing experience, says Henson, who could remember Harrow from Royal Shakespeare Company shows with Ian McKellen from his childhood.

His latest work was a Summer Shakespeare production of As you like it, in which he turned the Forest of Arden into a Glastonbury music festival with tents and fairy wings.

So with that experience behind him, he was ready to tackle Twelfth Night, which to Henson meant party, given the play involved a Christmas feast.

The curtain will not drop so the actors will have to make the necessary changes to the dilapidated Georgian house that is the set.

The costumes will also be quite out there, as will some of the props; think paddling pools and smurf onesies.

''Josh [Joshua Crammond] never gets to put his pants on, he runs round in a dinner jacket.''

While the language of Shakespeare might intimidate some, he believes the production makes it really accessible.

''We've all fallen in love with someone who doesn't love us back ... it's hugely relatable.''

Henson believes if the actors paint the right picture with the words, people will forget what their idea of Shakespeare was.

To see
The season of Twelfth Night, at the Fortune Theatre, runs from July 1-22.