Personalities behind the labels 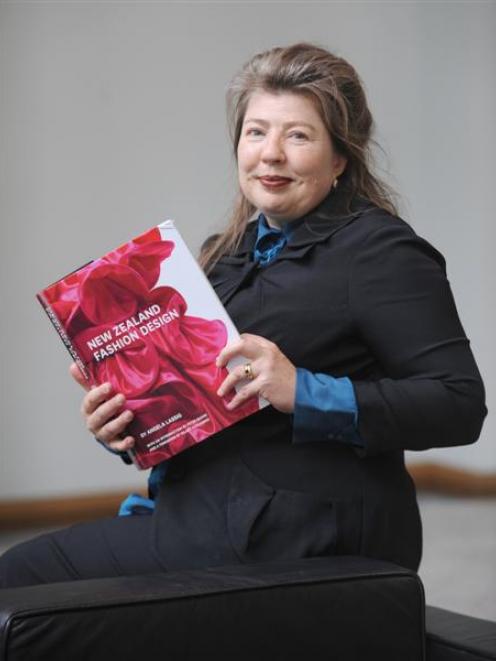 Lassig with her new book. Photo by Peter McIntosh.
A new book on New Zealand fashion is to be released next month, featuring two Dunedin designers. During her visit to iD Dunedin Fashion Week, author Angela Lassig sat down with Ellie Constantine to flick through the pages.

Having identified the need for a comprehensive book on New Zealand's top fashion designers, Angela Lassig dedicated the next four years of her life to putting it together.

Part of the motivation was an appreciation of the time designers spend discussing their rise to fashion fame with up-and-comers.

As fashion design has become a more popular subject for study and tertiary education institutions have sharpened their focus on New Zealand designers, the demand on their time is increasing, Lassig says.

She hopes her book, New Zealand Fashion Design, will address this issue as well as tell the designers' stories.

The former senior curator of history at Te Papa began working part-time on the book while still at the museum, before taking the project on full-time.

The first step was to narrow down the number of designers she would focus on.

A group of industry people helped produce the "honed-down list", she says.

Designers with a "personal signature", who had created an "aesthetic that was recognisable" - whether that be the way they worked fabric, a certain silhouette or embellishment - were the ones Lassig focused on.

The final 25 include such names as Karen Walker, Doris De Pont, Lonely Hearts, and Dunedin's Carlson and Nom*D.

As well as trawling through designers' archives, industry journals and original literature, Lassig carried out lengthy interviews, one of which continued for five hours.

What eventuated were 25 profiles, along with more than 500 photographs of garments and promotional material.

As well as offering a retrospective of collections, the book outlines designers' evolution and "humanises the fashion industry".

Lassig says she is "really proud of the detail" in the book.

It was interesting to hear how Robertson broke away from her sister, Elisabeth Findlay, of Zambesi, to define her own design ethic, she says.

"It was fascinating talking to her about her clientele."

The "student aesthetic" of mixing and matching old and new clothes and layering for the Dunedin weather was strong in her style.

"It astonishes me that a company of that size are still, essentially, sourcing vintage garments and reworking them," Lassig said.

"Every garment has the mark of the hand."

"Tanya Carlson recalls her childhood being full of dream-like scenes of tulle-skirted porcelain ballerinas, playing dress-ups with '50s satin ballgowns and reeling along the wild Otago mudflats in a Victorian perambulator drawn by a team of red setters," Lassig wrote.

The book features a picture of a fox dress, part of Te Papa's collection, made from a single piece of fabric that Lassig said harked back to Carlson's childhood memories of dress-up boxes.

The reader is presented with an insight into each designer's social background, motivations, stylistic endeavours and the highs and lows of their careers to date.

The in-depth nature of each biography allows the reader to move beyond the clothes and towards the person who created them.

Lassig hopes the book will "expose the diversity of New Zealand fashion" and "demystify" it for others.

After spending so much of her time researching fashion in the country, she says she does not believe there is such a thing as a New Zealand "look".

"I think people have generalised too much about it."

What was once touted as the "dark, intellectual aesthetic" of fashion in the southern island nation no longer applied.

Lassig is now studying for a master's degree at Auckland University.

Her focus is on mid-century fashion in New Zealand and the introduction and impact of the Christian Dior "new look" on the nation's style.

She does not rule out a second edition of the book as there are many more designers deserving of profiles, she says.

• New Zealand Fashion Design will be released on April 10.