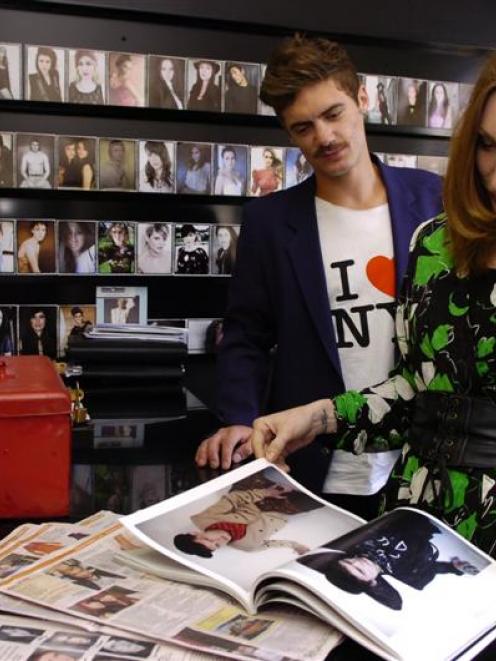 Aliana McDaniel looks over a fashion spread in Black magazine featuring her model, Tom Parsons (left). Photo by Jane Dawber.
The past four years have been good for Aliana McDaniel.

So good she is planning to expand her Dunedin modelling agency into Christchurch and Invercargill.

Since establishing Ali McD Modelling Agency in 2006, she has uncovered lots of untapped talent in the city.

Ms McDaniel now wants to use all she has learned in the past four years to offer weekly make-up and modelling classes in Invercargill and block courses in Christchurch from next year.

"Now is the time to diversify, because I have so much knowledge behind me," she said.

"There is a hole in the market."

She said managing models from other cities was much easier now, as much of the business was internet-based and she already worked with models in Christchurch for iD Dunedin Fashion Week shows.

The expansion plans will top off an exciting year for the boutique agency.

One of its highlights was joining forces with make-up giant Revlon, becoming the only make-up school in Australasia to gain Revlon sponsorship.

As part of the contract, Ms McDaniel promotes the brand and uses it exclusively at the agency.

The ongoing success of her models this year had also been great to see, she said.

In particular, Stella Maxwell, who has modelled for Karl Lagerfeld, of Chanel, and continued to impress big-name fashion brands in Europe, made her "very proud".

Ms McDaniel said having four of the 12 models on New Zealand's Next Top Model was another achievement.

Aafreen Vaz, Eva Duncan and Nellie Jenkins all featured on the show and Elza Jenkins was one of the final three.

Eight of her models have also appeared on international model talent website models.com, a feat which is "unheard of in New Zealand".

Such recognition is great for not only the models, but the agency, with Ms McDaniel praised for her model-spotting talent.

"I've got an eye - I'm actively out there scouting," she said.

The University of Otago was a "melting pot of amazing humans" and she was not above "stalking" potential models to offer her services.

Meanwhile, the agency's make-up school students will use their skills on a Robert Sarkies film, and Shortland Street casting agents visited twice to scout talent from associated agency McDaniel and Power Actor and Profile Management.

While the past four years had "been a hard road", Ms McDaniel felt proud to have achieved so much, helping put Dunedin on the industry map in the process.