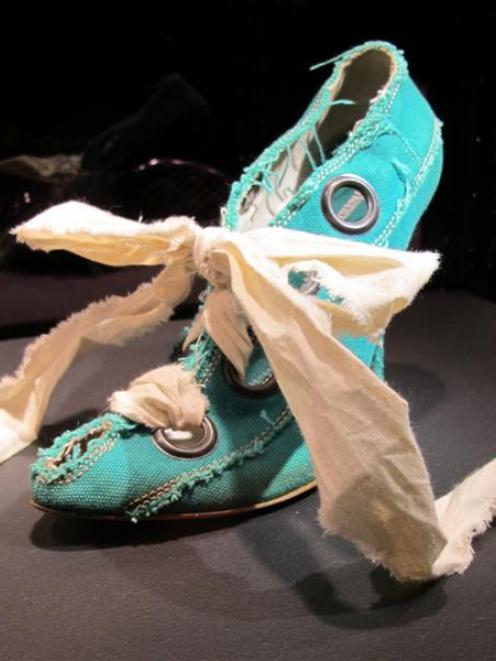 This Vivienne Westwood shoe comes from the retrospective show at Selfridges Department Store in London. Photo: MCT
My feet are woefully shod, I realise too late.

But my feet beg for better treatment.

They want to try on buttery suede shoe-boots with lemon insides and red soles.

They ache to slip on purple glittery pumps, too fragile to possibly support even one big toe.

I can't bear to look at the price tags.

I walk away, my sneakers regretfully clomping away, as awkward as elephant's feet.

It's hardly on par with Big Ben, but the newest amazing sight in this old city is Shoe Galleries, the world's largest shoe shop, which opened in September inside the historic Selfridges London department store on Oxford St.

With 55,000 pairs of shoes, 4000 different styles on display, 129 brands and 35,000 square feet of space on the store's second floor, it's cashing in on the odd fascination that our recession-plagued society has with shoes.

And it's aiming to become a new tourist attraction in a city already packed with sights (London Eye and Magna Carta, watch out).

In the streets of London this autumn, women are wearing very short skirts, black tights, and black or brown ankle boots, either tie or side buckle, either flat or heeled.

But think about it.

If 4000 London women each bought a different style of shoes in this shop, not one would look the same.

And this giant store is for women's shoes only.

Nobody cares what is on men's or children's feet.

For me, the best part of the new shoe extravaganza at Selfridges was not the plush galleries, designer names or exquisite displays.

It was a Vivienne Westwood retrospective show on the store's lower level.

Westwood, a British designer whose shoes are famous for their impracticality and height, saw footwear as artwork.

This woman obviously didn't believe in gravity or tippy ankles - she believed, as the exhibit noted, in "the defiance of the rules of wearability and convention".

Model Naomi Campbell fell off her shoes on the runway in 1993 while wearing Westwood's incredibly high Super Elevated Gillies.

After seeing Westwood's astonishing shoes, then returning to the new galleries upstairs, the exotic shoes for sale look super-sensible in comparison, really, even for an American tourist.