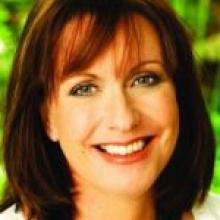 Allyson Gofton
The smell of baking wafting through the house is one of the most comforting homely aromas, and it's in the air again. Charmian Smith talks to Allyson Gofton about the resurgence in home baking.

There's a real nostalgia for old-fashioned recipes, judging by the numbers of baking cookbooks appearing in the past year. Allyson Gofton, author of one of the most recent, Bake, agrees.

"We've looked back at who we were, where we'd come from, both as a family and a nation, and I think we've taken things out of that we really loved and admired.

I think home baking is one of those. They were really talented women at home. They didn't get a career - we've changed that now - but man, could they cook."

The re-emergence of the baking tray is not led by something new in terms of food, but is probably being driven by the credit crunch, Ms Gofton says on the phone from Auckland.

"Whether it's real and affecting everybody, or whether it's the talking about it and the thought it's going to come, it's playing a large part in people wanting to do things at home."

There may also be a suggestion of rebellion in it.

Young people always question the priorities of the generation before, and many young women who grew up with working mothers are now choosing more nurturing roles.

"They've grown up in a home where no mum has cooked, so they've got memories of few things and are interested to do it now.

I think we need to come back to knowing what home food is about and accepting that it's OK.

We all say we love cottage pie but none of us are game enough to say we want to cook it."

Ms Gofton has incorporated a sense of nostalgia in her book, particularly with the use of old crockery, cutlery and napkins in the photographs.

But while many of her recipes might be old-fashioned - they include her mum's tea cake, grandma's jam roll, pikelets, lemon meringue pie, flapjacks, yo-yos and anzac biscuits - she also includes some fashionable things too, such as friands and biscotti.

But perhaps what makes it a book for contemporary cooks is the detailed information and tips aimed at those who have not learned to cook at their mothers' sides.

These days our eyes are drawn to pictures and information boxes, which people read first, she says, and she has included tips in pink boxes near the pictures.

She has included basic information that older cookbooks assumed you'd know, such as rearranging oven shelves, preheating the oven and preparing the tin or tray, what size bowl or type of spoon you need, and information about how to store the baking and how long it will keep.

She happily uses butter in most of her recipes, but says if people are substituting margarine for butter in the recipe, they need to make sure the margarine has the same fat content (about 81-83%) as butter, or the recipe will not work as well.

Ms Gofton is also concerned we get back to realising what a proper portion size is.

You will get 20 slices out of a loaf or 36 biscuits out of a mix if you make them small enough.

We've been misled by cafes serving giant muffins and slices to think that is correct, but you only need a small biscuit or piece of slice or cake with your morning coffee or afternoon tea, she says.

Gofton, who fronted the Food in a Minute television advertisements for 13 years and has done charity fundraisers around the country, has always identified her cooking with that of ordinary New Zealand families.

"I like that. I think it's actually me. That's my background, that's where I came from and I feel more at home in middle New Zealand than in any top-end thing. As a writer I find it difficult to write for a market I cannot relate to."

Gofton grew up in Tasmania and regularly visits her elderly parents there.

With two children, Jean-Luc (6) and Olive-Rose (2), and having struggled with depression after the birth of Olive-Rose, she says she now very much identifies with the people she writes recipes for.

This is still my favourite cake. My mother always made it when she was in a hurry to entertain friends.

The flavour is simple from its basic ingredients and it is best served warm, cut in wedges and spread with a little butter.

Preheat the oven to 180degC.

Lightly grease and flour a 20cm round cake tin. Using a wooden spoon, mix together the sugar and butter. There is not enough to cream, so mix as well as you can.

Beat in the egg. Sift the flour and baking powder together and fold into the butter mixture alternately with the milk. Spoon the batter into the 0prepared cake tin.

Bake in the preheated oven for 40 minutes or until it is well risen, golden, and the edge has shrunk from the side of the tin.

Allow the cake to stand for five minutes before turning out on to a cake rack as the freshly cooked cake will be too tender to turn out sooner and is likely to break in the process.

While the cake is still hot, spread the softened butter over the top and sprinkle over the sugar and cinnamon. Cut into 8-10 wedges and serve lightly buttered.

Preheat the oven to 180degC. Grease and line the base and sides of a 20cm square cake tin.

In a large bowl, stir together the melted butter, sugar, beaten eggs and golden syrup. Add the apple slices and toss to coat.

Sift the flour, baking soda, nutmeg and cinnamon together and stir into the apple mixture. Turn into the prepared cake tin and place the walnut halves on top.

Bake in the preheated oven for 45-50 minutes, until a cake skewer inserted comes out clean. Cool in the tin for 10 minutes before turning out on to a cake rack.

Dust with a thin layer of icing sugar, if wished, before serving warm with custard or cream. Keep the cold cake in an airtight container and eat within three to four days.

Variations: Use pears and nashi in place of apples. Use half wholemeal and half plain flour. The moistness of the apples works well with the coarser wholemeal flour.