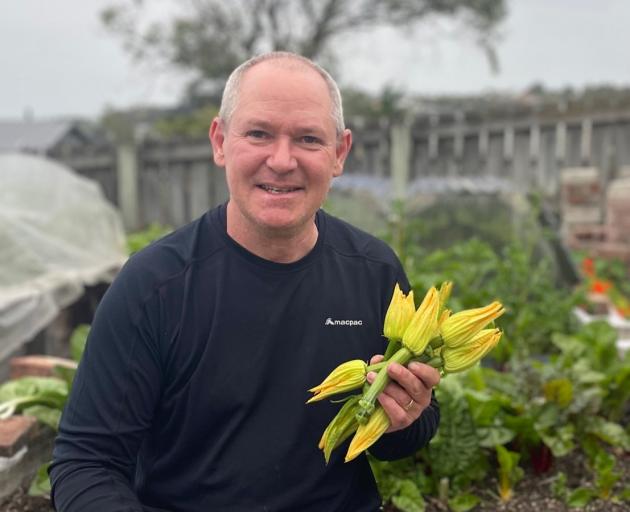 Neil Robinson shows his baby zucchini with flowers still attached. PHOTO: ROBINSON
The growing trend of eating locally produced food helps not only the local economy, but also the planet, our health and even food security and resilience.

And a bonus is that produce harvested the day before has more flavour because it is fresher than supermarket-bought produce.

In Dunedin, the most obvious manifestation of this locavore movement is the Otago Farmers Market at the Dunedin Railway Station where local growers and food producers sell their products to thousands of eager buyers each Saturday morning.

There are also community gardens in various states of productivity dotted around the city where local groups grow and share vegetables, various other initiatives like community fruit harvesting, and of course many people have their own vegetable gardens.

A handful of people, usually with land on the city peripheries, grow specifically for chefs who appreciate the quality and flavour of freshly harvested, seasonal produce that has been harvested the day before, or even the morning it is delivered.

However, the practice of urban farming pioneered and publicised by Canadian Curtis Stone, using someone else’s land to grow produce, is only beginning in Dunedin.

In this land-sharing model, capable people without land of their own use other people’s land to grow productive crops for sale, usually in return for produce.

These can be CSA (community supported agriculture) vegetable boxes or for direct sale to chefs or others.

At the farmers market Esther Bosshard, of Locally Grown Seasonal Bouquets, sells flowers she grows in other people’s gardens.

Neil Robinson, of Garden to Market, has also been influenced by Stone.

A keen home gardener for many years, he was inspired by Stone’s videos and book, The Urban Farmer, and started to sell a few vegetables to friends. He extended his backyard vege garden at Ocean View, planted a few things in neighbours’ gardens and about three years ago started selling fresh vegetables to a couple of restaurants.

Stone’s urban farming model, followed by the likes of Organic Market Garden in Auckland, Kaicycle in Wellington and others around the country, uses intensive organic and regenerative agriculture methods, no-dig techniques and lots of compost which encourage soil health. They raise multiple high-value, quick-growing crops in a season by replanting as soon as the earlier ones are harvested. It relies on streamlining labour and production, something Neil, with a day job as an engineer at Fisher and Paykel, is well versed in.

As his business expanded. he looked for more land and met an older couple who had run a large vegetable garden close to the central city for many years. They wanted to continue to see their land productive but no longer wished to do it themselves.

With expertise in designing efficient production systems, Neil is concerned about his efficiencies, especially as he has limited time around his day job to grow vegetables and run his business.

A production plan, knowing the yield and days to maturity of his crops, providing a continuous succession of vegetables of the type and size that chefs want and keeping good records are important, Mr Robinson said.

The home gardner doesn’t usually keep a diary and often wonders why things go to seed or why there’s an abundance at one time of year, he said.

Also essential is a weed management programme that allows you to maximise your time.

Laying tarpaulins on fallow ground to suppress weeds, taking out weeds when they are small, and growing plants closely so weeds don’t have a chance to flourish, are more efficient than pulling them out and putting them on the compost heap when they are bigger.

"It’s the same with any business really. If you don’t identify where those wastes of time are, then you are not really doing things the right way," he said.

"It’s what we call lean process in business practice. Everything is focused on delivering value back to your business. The aspects I’m focused on are planting seeds, transplanting, harvesting, marketing and delivery. Something like weeding doesn’t add any value as a process so I’m trying to limit the need to weed at all times. The less time I spend doing that the more time I can spend on things that actually make me money."

Marketing is another essential aspect to his business which includes developing relationships with the chefs he supplies, knowing the nuances about the quality and quantity they want, showing them the garden and the quality and flavour of freshly harvested vegetables compared with what is supplied by food service firms or supermarkets.

"I think it’s really about flavour that comes from the freshness. They really like the fact they’ve got a local guy to talk to, to source the best quality produce they can use," Neil said.

"When you take the time to talk and break down their menus, what they are using, the different dishes, you see more of the opportunities that are there."

Growing and supplying zucchini flowers with the baby fruit on them has been a deal-breaker this season, he said. He is also growing radicchio, edible flowers and other niche products that chefs are interested in.

With a day job and his urban farming business, does he have have time for anything else?

It is important to maintain life balance, he says. He has two teenage sons who require a bit of time and a few hobbies of his own that contribute to the bottom line such as fishing and hunting. He also enjoys an occasional visit to the movies with his family, and eating out — but that is part of his market research.