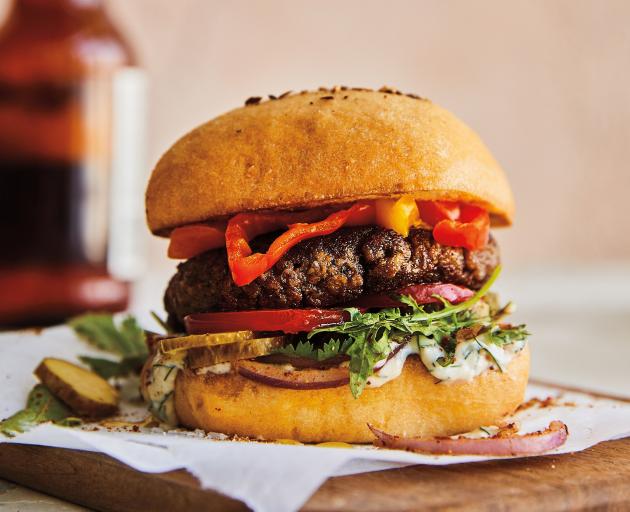 The vegan "Impossible Burger" made using plant-based meat substitutes. PHOTO: SUPPLIED
For a while now we’ve been hearing about the development of planet-friendly meat substitutes such as meat grown in a lab from animal cells and burgers that look and taste like meat but are made from plants.

While the lab-grown meats are not yet on the market, a couple of plant-based meat substitutes, Impossible Burger and Beyond Burger, are now being imported from the United States. They can be found in a few restaurants and some supermarkets.

Although they are both vegan, don’t look in the vegetarian or vegan sections for them, at least in Countdown. They look like meat, cook like meat, taste like meat and are available from the meat department. New World at present sells only Beyond Burgers, which are in the vegan section.

Both products are shipped frozen with an "if purchased frozen use by" date stamped on the package. Once here they are thawed and the retailers add a use-by sticker which is a different date from the if-purchased-frozen date.

The companies making plant-based, imitation meat promote the fact that farming animals as we currently do is not globally sustainable as it has a high carbon footprint, while their plant-based products’ footprints are much smaller. Raising animals for meat takes a lot of land, including for growing feed, uses a lot of water, and produces large quantities of greenhouse gases, whereas growing plants for food is more sustainable.

The influential Eat Lancet Commission three years ago said, "Food is the single strongest lever to optimise human health and environmental sustainability on Earth. However, food is currently threatening both people and planet."

It recommended that for both human and planetary health we should eat less meat and more vegetables, whole grains and fruit.

However changing our diet is not always easy and innovative companies like Beyond Meat and Impossible Foods aim to enable meat-lovers to continue eating products that look and taste like meat but are actually made from plants.

It’s a bit like artificial sweeteners. You can continue your old habits with a substitute that doesn’t necessarily have the health or environmental impacts of the original product, suggests Prof Sheila Skeaff of the human nutrition department at the University of Otago.

"Rather than moderating our taste for sweet we put artificial sweetener in fizzy drinks [and tea or coffee] and keep doing what we want, which doesn’t help us in the long term."

She doesn’t think plant-based burgers that look and taste like meat will actually help people change their diets.

They may not help people reduce their meat intake and they are significantly more expensive (at about $12-$12.50 for two 113g patties) than beef hamburger patties or even other vegan patties. However, they do have some fibre which meat doesn’t, as well as a reasonable amount of protein, fat and iron.

According to Prof Phil Bremer of the Otago food science department, using yeasts to express proteins is not new, so probably the company’s biggest coup was finding a plant-based heme which gave the desired functionality.

Heme is a protein present in animal and human blood and in plants and even microorganisms. Its iron is said to be as bio-available as iron from red meat. Impossible Foods claims this innovative component is its "magic ingredient" as it makes its soy-based product look and taste like meat. It even oozes a little pink when cooked and cut.

Beyond Burgers are made from pea and rice protein and contain non-heme iron from plants, which is less bio-available. Beetroot juice is used to colour these patties pink.

Both use coconut oil, which contains saturated fat, and either rapeseed or sunflower oil. They both contain about the same amount of saturated fat as regular beef mince but much more than grass-fed New Zealand prime beef mince.

Both are plant-based, vegan, gluten-free and keto. Impossible Burger also says it’s halal and pareve (meeting Muslim and Jewish dietary laws) and claims to be a good source of iron; Beyond Burger says it contains no soy or GMOs.

However, they are both highly processed products made mostly from substances extracted from foods and contain a number of additives.

I compared the two products, simply cooking them in a pan lightly coated with oil, but they can be cooked on a grill or barbecue as well.

Cooked, the Beyond Burger was thicker, softer, juicier and also a bit more crumbly than the Impossible Burger which was flatter and neater.

Both had a similar texture and flavour to mince patties with a pleasant moistness and slight pinkness in the middle.

Put either of them in a bun with pickles, sauce, and other ingredients and you would be hard put to tell the difference from meat.

Both companies are working on other meat substitutes, such as chicken and pork.

It has to be remembered that if products like these take off, premium, grass-raised meat such as New Zealand produces is predicted to still find a place at the top end of the market.

As Prof Skeaff says: "Everything we see is telling us, you don’t have to give up meat entirely if you don’t want to, though it’s great if you do. You don’t need to have meat every night of the week, but reducing and replacing is where we are hoping to go in the future.

"I think we really want people to moderate what they eat and eat more vegetables and legumes. I don’t think these kinds of products are helping people that way."