How to make pasta frittata and panzanella

Mike Colombo and his wife Harlene Hayne came to Dunedin in 1992 to take up positions in the psychology department at the University of Otago. 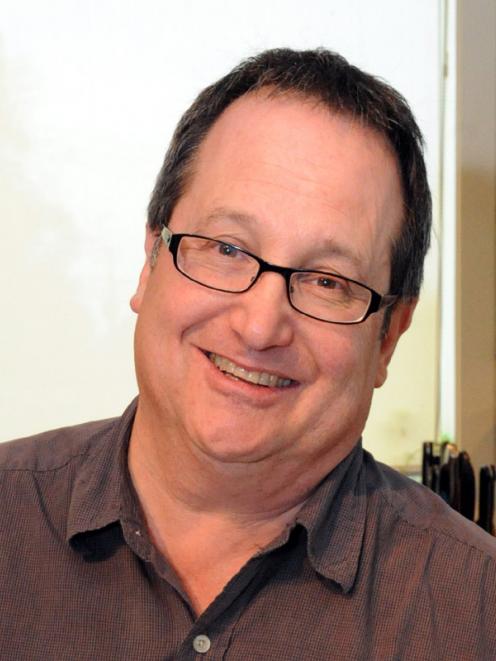 Mike Colombo.
It was difficult to find two jobs in the same department, and they thought they'd stay for three years.

Now, 20 years later, they love Dunedin and the lifestyle, relishing the opportunities to get outdoors.

Prof Colombo's parents were Italian. He grew up in the US but they lived in Italy for a while. He does most of the cooking at home and loves making things that are not often seen in restaurants.

Although he sometimes likes to cook elaborate meals, you often need quick, easy dishes that use up what you have in the refrigerator, such as pasta frittata. He used to eat it a lot as a child and still cooks it often.

Panzanella (bread salad) is another quick dish that can be a whole meal in itself, depending on what you put in it. This rustic salad is a great way to use up left-over bread, but Prof Colombo and his family enjoy it so much they buy bread specially to let it go stale to make this. 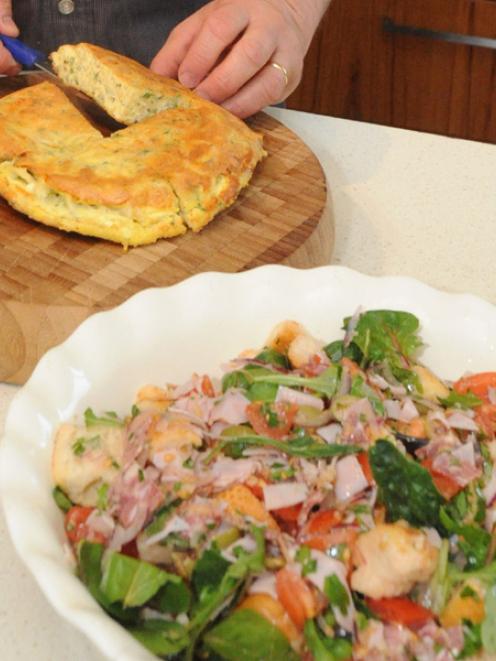 Quantities depend on what you have and the size of your pan. This is enough for a small to medium pan and will feed 3-6 depending on how hungry they are.

Break the eggs into a bowl. Whisk them with the cheese.

Add the cooked pasta - he used leftover spaghetti - and mix in with the chopped parsley.

Season with salt and pepper.

Heat the butter in a small pan and when sizzling pour in the egg mixture to fill the pan. The resulting frittata will be quite thick.

Turn the heat very low and cook for about 10-12 minutes. Check the bottom of the frittata. It should be nicely browned.

Tip the frittata on to a plate and slip it back into the pan so the other side can cook. Check the bottom after another 8-10 minutes, and when it's nicely browned, turn it out on to a plate. Cut into wedges to serve.

Quantities are variable, depending on how many people you are feeding and what else, if anything, you are serving with it. You can vary the ingredients too, depending on what is in your refrigerator. It keeps well in the refrigerator so make enough for two days.

2-4 cups stale bread cubes (see tips)
a couple of slices of ham, chopped
a few slices of salami if you have it, chopped
a handful of olives, rinsed and chopped
5-6 ripe tomatoes, chopped
¼ red onion, finely sliced and rinsed (see tips)
a handful of parsley, chopped
mesclun salad leaves
about 2-3 Tbsp olive oil
about 1-2 Tbsp wine vinegar
salt and pepper to taste

Put the bread cubes into a bowl. Add the ham, salami, olives, tomatoes, red onion and parsley. Sprinkle over oil and vinegar, season with salt and pepper (remembering the olives will already be salty). Toss to distribute the oil and vinegar dressing, then gently mix in the salad leaves. Allow to sit for 15-20 minutes for the bread to soften in the dressing and tomato juice. You may like to add a little water to soften the bread if you want to serve it sooner, but don't let the bread get too soggy.

• When you are having pasta, cook a little extra so you have some left over to make pasta frittata the next day.

Instead of turning over the frittata to cook the other side you can put it under a grill.

• Prof Colombo likes to use a mezzaluna (two-handled curved knife) to chop parsley.

• His family often eats this frittata for breakfast. It's very good with tomato sauce, he says.

• Prof Colombo cuts a French stick into cubes and leaves it for two or three days to go stale and hard, but any cubed stale bread will do.

• When opening a jar of olives, he drains out the salty liquid and rinses the olives in fresh water to reduce the saltiness.

• To reduce the pungency of raw red onion but retain its sweetness, he puts the thinly sliced onion into cold water, squeezes the water out then does it again.

Put pasta on to cook, whizz a can of tomatoes in the processor with about cup olive oil and some salt, and serve on the hot pasta. It's fresh and delicious. Sometimes he will heat the sauce with a little Italian porcini stock for an extra richness, he says.