How to make sticky rice 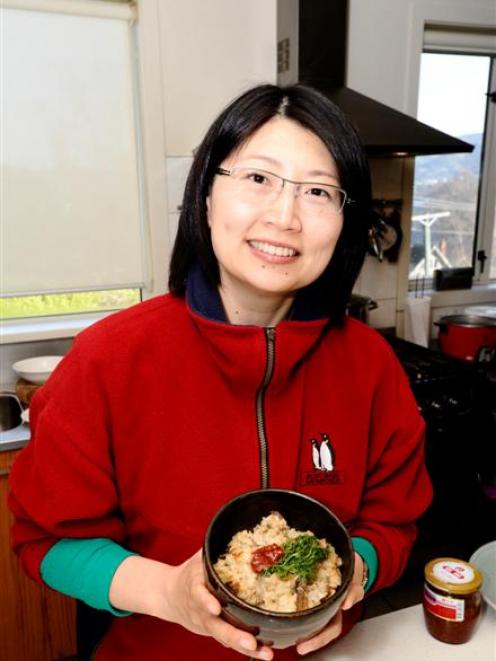 Andrea Mei-Wen Wang with a dish of yu-bin. Photo by Charmian Smith.
Andrea Mei-wen Wang first came to New Zealand when she was 16 as an overseas student. She and her brother attended Edgewater College in Auckland and lived near their aunt, who became like a second mother to them. Andrea went on to university in Auckland, married a New Zealander and came to Dunedin with her husband and two small children five years ago.

She learned this traditional Taiwanese dish from her aunt. It was a favourite and would usually be eaten with meatball soup, stewed eggs and a steamed vegetable.

Soak the dried mushrooms and shrimps in cool water in separate bowls. Change the water and wash the mushrooms after 30 minutes. If you don't like strong flavors, change the water several times every half-hour.

Cut the pork into small pieces, slightly bigger than the shrimp. If using the marinade, mix the marinade ingredients and marinate the pork pieces in it for 1-2 hours in the fridge.

Soak the rice for 15-30 minutes then cook in a rice cooker or on the stove top. Keep warm.

Squash the garlic to break apart the cloves; squash each clove with the side of a knife so the skin comes off easily, then chop roughly so they are about the size of the shrimps.

Squeeze the water out of the mushrooms, making sure there are no hard pieces or sand in them. Cut out the stalks and slice thinly, again about the size of the shrimps.

Heat the oil in a pan or wok. When it is hot, add the garlic and stir for a minute or so, then the pork, then the mushrooms. Stir until the pork is cooked and the color changes, then add the dried fried shallots or onions, soy sauce and salt if desired - soy sauce is already salty.

Turn the heat down and add the cooked sticky rice spoonful by spoonful, folding and turning it carefully into the fried mixture so the grains remain intact. It takes a while and requires strong arms as the rice is stiff and sticky. It is best to use two spatulas with flat bases, and a non-stick pan will help. Gradually it will all mix in, the rice will lose its white color and the flavouring ingredients will be evenly distributed. If you think the color is too pale, add more soy sauce.

Serve topped with fresh coriander and a dollop of chilli sauce, preferably from Taiwan.

Thanks to Fife Harris and Havoc Pork.

• You can use leftover cooked pork instead of raw pork. Any cut, or even mince will do.
• Substitutes for pork are dried scallops or dried squid or, for a vegan or vegetarian version, dried tofu and ginger.
• Quantities are variable. Andrea's aunt never measured, but used to say it depended on how generous you were feeling how much of the flavouring ingredients you used!It is important to use freshly cooked warm rice as sticky rice goes hard and even more sticky as it cools.
• Soaking the dried mushrooms and shrimps in cool water does not remove as much flavour but takes longer. Andrea likes to soak them for 2-3 hours but sometimes leaves them overnight.
• Dried fried shallots or onions are available from Asian grocery stores or international sections of good supermarkets. You could use fresh onion or shallot and cook them slowly first.
• Sometimes this mix is steamed together wrapped in bamboo or lotus leaves instead of being fried first. In this case leave out the garlic.