On the menu: New US developed flat iron steak 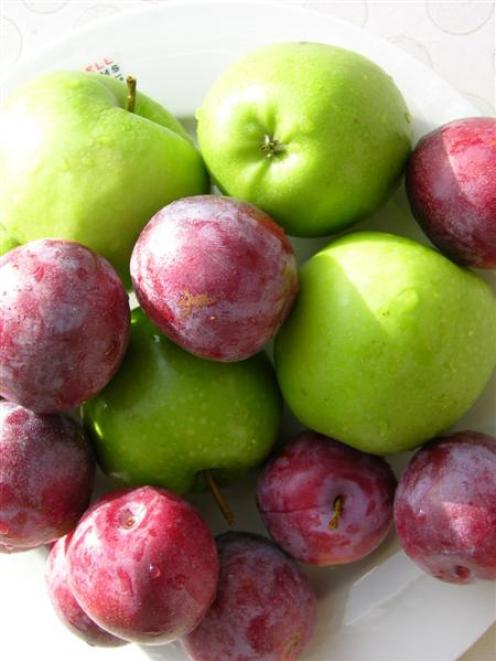 Granny Smith apples and plums.
We're all familiar with the regular cuts of steak - rib eye, fillet, rump, and so on, but there's a new one around - the flat iron steak, named because it looks a bit like the shape of an iron.

It was developed by food scientists in the US where it is becoming trendy. It comes from the shoulder, a cut that used to be used for stews and casseroles, but the way it's cut, with a strip of gristle removed, makes it suitable for grilling, and at an affordable price.

I had a delicious one recently at No 7 Balmac, the new cafe in Maori Hill. Chef Alison Lambert cooks it on a wood-fired grill which gets to about 400degC, and bastes it with a marinade.

If it's cooked more than medium-rare it will become tough, she says. Well worth trying.

Colours delight
I never cease to be delighted at the colours of fruit and vegetables I bring home from the farmers market and supermarket.

I had to photograph the above wonderful green Granny Smith apples with dark purple and blue Torwick plums, a late variety still around at the Otago Farmers Market.

They are delicious cooked whole, gently in a little red wine and sugar, with a star anise, a cinnamon stick and a few cloves for dessert.

K-Kiwi favourite
Afghans, those crunchy chocolate biscuits that have become a Kiwi favourite, usually have cornflakes as an ingredient, although sometimes Weetbix are used, which makes them softer.

A colleague, who delights in specially crunchy afghans recommends using Special K instead.

Recipe book
If you've got a microwave that crisps and grills, you might find Joy Peel's Whirlpool Crisp n' Grill Microwave Recipes (Publish Me, $30) useful.

The appliance demonstrator says there was a demand for the book from people who wanted to cook "ordinary" food such as cakes, biscuits, pastries and meat in the appliance using a combination of moist microwave heat and browning radiant heat.

It saves power and time, she says. The book is available from Paper Plus stores or www.publishmeshop.co.nz.

Sweet idea
Honey is one of the few foods, like wine, that can reflect where and when it was harvested.

Not only are they from unblended single flower varieties, but they are also dated with the year and month of harvesting. They come from one of four beekeepers around the country who produce certified organic honey.

Available from specialist shops or from www.nzartisanhoney.co.nz