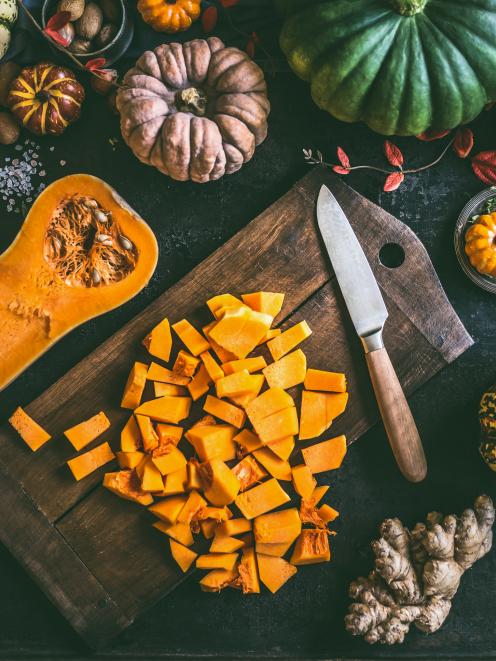 Autumn vegetables, such as pumpkin and butternut, taste better if left for a couple of weeks after picking. Photo: Getty Images
Not all fruit and vege are best eaten as soon as they are picked, writes James Wong.

One of the mantras of popular food culture today is ‘‘eating seasonally’’, a practice universally held to be the key to better flavour, better nutrition, better ethics, better everything. However, as a scientist who is fascinated by how what goes on inside the cells of plants dictates the flavour and nutritional benefits of harvests, I have just one problem with this: it’s simply untrue.

For while the sweetness of crops such as asparagus and sweetcorn can indeed decline precipitously in the days (even hours) after harvest, for many crops the exact opposite occurs. This is particularly true of the winter squash, which despite being ready to harvest right now, will measurably increase in flavour and nutrition if you hold off eating it for a few months. For squashes, fresher is definitely not better. Here’s how it works ...

Even when severed from the parent plant, winter squash are still alive and will undergo biological changes responding to the environment around them. Enzymes in their tissues are slowly released that break down the stores of starch they contain, turning them into simple sugars. These sugars are responsible for the sweet flavour of roast pumpkin and butternut-squash soup, and also trigger a cascade of knock-on chemical reactions, such as the production of carotenes.

These orange antioxidant pigments give the fruit their characteristic colour and, when converted into vitamin A in the body, supply nutritional benefits, too. Finally, these carotenes are broken down to create the flavour compounds that provide squash with their rich, nutty, caramel notes.

Ever wondered why pumpkins, sweet potatoes and carrots have a bit of a flavour crossover? That’s partly because of these orange-coloured phytonutrients. This chain of chemical reactions makes the crop sweeter, better coloured, richer in flavour and also higher in phytonutrients and key vitamins, and all it takes is a bit of patience.

There is just one small catch: knowing how long to leave them depends on the variety of squash you are growing, as ‘‘winter squash’’ is just a catch-all category for three totally distinct species. For almost, all true winter squash (developed from the species Cucurbita maxima), store your fruit in a cool, dark, well-ventilated place at between 10-15degC for at least a month.

However, for jack-o’-lantern-type pumpkins and acorn squash (C. pepo), which are technically marrows and generally pretty watery and lower in flavour compounds, the process takes as little as two weeks under the same conditions. Finally, if you are growing the butternut squash, C. moschata, this can take as long as three months to reach its peak.

In short, to get squash that is better in pretty much every way, there is only one thing you have to do: stop thinking about it as an autumn vegetable (just because you harvest it in autumn) and call it a winter vegetable, as that’s the best time to eat them. They are all winter squash, after all.