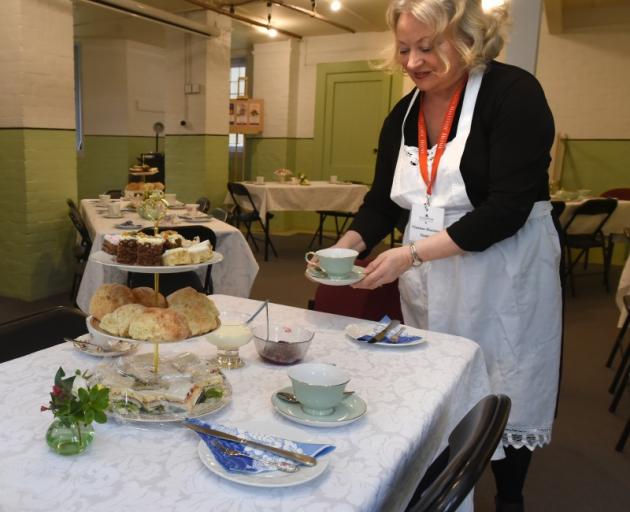 Olveston Historic Home guide Viv Houston serves an afternoon tea in the drying room. PHOTOS: GREGOR RICHARDSON
When I visit a stately home such as Olveston or Larnach’s Castle, I can’t help wondering what food the original owners served when they entertained, so I asked Emeritus Prof Helen Leach of the University of Otago.

There are many reports of ‘‘At Homes’’, garden parties and other gatherings in the social pages of early-1900s local newspapers, according to University of Otago food anthropologist Helen Leach.

They went into great detail about what the ladies wore, the table decorations and flowers, but rarely mentioned the food apart from a few words like ‘‘a dainty supper was served’’ or ‘‘ices were served in the adjoining room’’.

Prof Leach was asked to research the food that would have been served at an Edwardian garden party such as that described in Katherine Mansfield’s story The Garden Party.

Besides trawling the social columns of the period, she also looked at photographs in the Hocken Collections.

‘‘There were quite a lot, and the most outstanding feature was the exuberance of the women’s clothing,’’ she says.

‘‘The men wore what was appropriate for the time — it almost looks like a uniform, but the women were free to engage with their huge hats and layers of clothing very likely with the erect-form corset underneath. But in all of these there was only one that showed any food on the table, and unfortunately ... I couldn’t distinguish what it was.’’

The tables were covered with white tablecloths, fine china cup, saucer and plate sets were used, food was served on plates lined with crocheted or paper doilies and tea was served from teapots rather than urns. 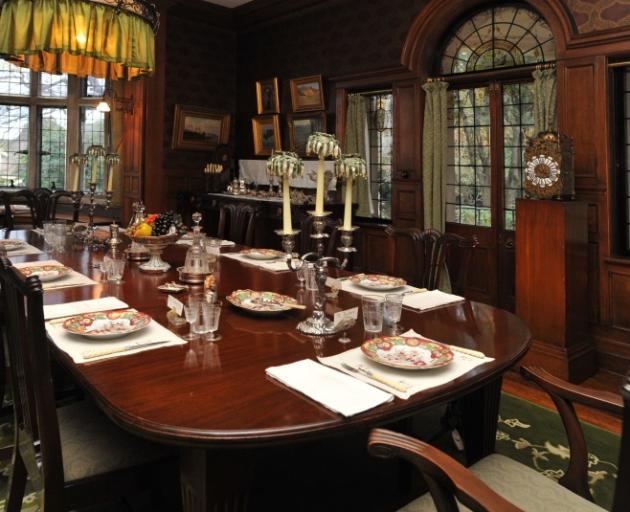 The dining room at Olveston.

Mansfield’s story only mentions the food incidentally. The cook has been busy making 15 types of sandwiches and asks for little flags to label the fillings, of which only two are mentioned: egg and olive, and cream cheese and lemon curd. Laura, one of the daughters, invites her friend Kitty to lunch and warns it will be crusts from the sandwiches and broken meringue shells. Cream puffs are delivered from Godber’s, which is famous for them, and there are cakes and passionfruit ices.

Prof Leach had to delve further. Mansfield’s story was written in 1921, a year or two before her early death from tuberculosis. She had been living in Europe since 1908 but, as with many of her stories, it was based on her  experience as a child in New Zealand.

The story is set in the home of Mr and Mrs Sheridan, their son Laurie and their three daughters Meg, Jose and Laura. The Sheridans have a cook, a gardener,  Sadie the housemaid, and Hans who helps shift furniture. A marquee is erected on the lawn and band members in green coats set up in a corner of the garden.

They learn a man living in the workmen’s cottages in the crowded, unsanitary gully below has been killed, leaving a wife and five children. Laura feels the party should be cancelled, but her mother distracts her with a new hat. During the party she acts as a junior hostess, offering guests tea and ices.

After the party, Mr Sheridan tells the family about the death and Mrs Sheridan packs a basket of leftovers for Laura to take to the bereaved family. They decide against taking arum lilies as they would spoil her lace frock.

In the cottage, she finds herself staring at the dead man’s unmarked face, marvelling at its peacefulness, and asks herself: ‘‘What did garden parties and lace frocks matter to him?’’

Prof Leach considers  class to be the story’s central theme.

Mansfield had based the setting on the grand family mansion in Tinakori Rd, Wellington, where she lived as a teenager (not the smaller house further down the street which is now preserved as her birthplace).

The Sheridans are based on Mansfield’s own family, the Beauchamps. Mr Beauchamp was a self-made man who spent his wealth on grand mansions, trips overseas and expensive finishing schools in Europe for his daughters, Prof Leach says.

Trawling the social columns of the time, she found the Beauchamps had hosted several parties, including a garden party for 150 guests in 1902 when Katherine was 14, at which she and her sisters had acted as junior hostesses. Mansfield drew on this experience for her story.

But what food was served?

Prof Leach was surprised not to find menus for garden parties in cookbooks of the time.
‘‘I would say it’s because there are lots of different reasons you give a garden party. You could do a fundraising one where you don’t have really fancy food and people pay for their cup of tea.’’

However, a contemporary American book recommended serving what we now call finger food. Meat fillings for sandwiches should be pounded into a paste as it was easier to eat than sliced meat. They could be made with thinly sliced white or brown bread. Cress or another green salad ingredient could be included and the fillings highly seasoned.

The crusts must be cut off and the sandwiches cut into small squares or triangles.

In the story, Mr Sheridan eats two leftover sandwiches in just two bites, which indicates how small they were. Cakes and meringues would also have been tiny compared with today’s ones, Prof Leach says.

Ices could be either sorbets or ice cream, and needed to be served in a dish and eaten with a spoon, so they would be served in the house where chairs and tables would be provided.

In her Olveston research, Prof Leach found that at one party tea, coffee and cakes were served in the dining room and ices and fruit salad in the adjoining room ‘‘and not withstanding the coldness of the weather they were partaken of freely’’, according to the social columns.

Like the cream puffs, ices would be ordered from the caterer and stored in the icebox until served.

Cakes would be either small like queen cakes, which had sultanas in them, or small meringues. Larger cakes such as sponge sandwiches filled with cream would probably not have been offered as they would need a fork to eat — difficult to manage with a cup and saucer in your hand.

However, slab cakes which could be cut into squares or slices were easier to handle. These included seed cake, madeira cake, fruit cake and tennis cake. Tennis cake, a plain butter sponge filled with fruit and nuts, cooked in a rectangular tin and decorated to look like a tennis court, was all the rage in Wellington at the time.

Prof Leach will give the annual Lawson Lecture under the auspices of the Southern Heritage Trust later in the year.