The cupboards are bare, so Nigel Slater has gone back to basics for a simple, but satisfying, dinner you can make from scratch.

It has rained on-and-off all day and now, as the streetlights start to come on, it has become bone-chillingly cold, too. There is little or no temptation to leave the house. Dinner will be more rummage than forage. I don’t keep a heavily-stocked fridge, but I can usually get some sort of meal together without having to shop.

There are cans of chickpeas in the cupboard. I fancy making them into soft cakes, seasoned with rosemary and garlic and frying them to a crisp on the hob. But once the peas are crushed to a velvet puree, I raid the little box of aromatics in the bottom of the fridge for some seasoning. Even that is unusually low, revealing nothing more than a shallot or two, a couple of chillies somewhat past their best and two stalks of lemongrass, but there is a good firm lump of ginger. There is also a bag of spinach, slightly past its use-by date and a few herbs. The chickpea cakes can have a ribbon of spinach running through them, a southeast Asian seasoning.

The little bowls of fruits in the larder currently offer nothing more interesting than two pears that need a few more days ripening and a handful of tiny scarlet apples. I slice the apples in half and bake them, basting them now and again with a splash of sherry and the remains of a jar of marmalade.

Tomorrow, I will fill the little box of aromatics with shiny new chillies, a packet of lime leaves, more ginger and fresh limes. I will come back from the shops with a crinkly leaved cabbage, some smooth heads of pink chicory and a bag of crimson skinned blood oranges. I will pick up a pomegranate, some dark grapes, pumpkins and parsnips. But for now, there’s the satisfaction of having made the most of what there is, quietly, and giving thanks for a few little apples, a bag of spinach and a can of chickpeas.

Chickpea cakes with spinach and lemongrass 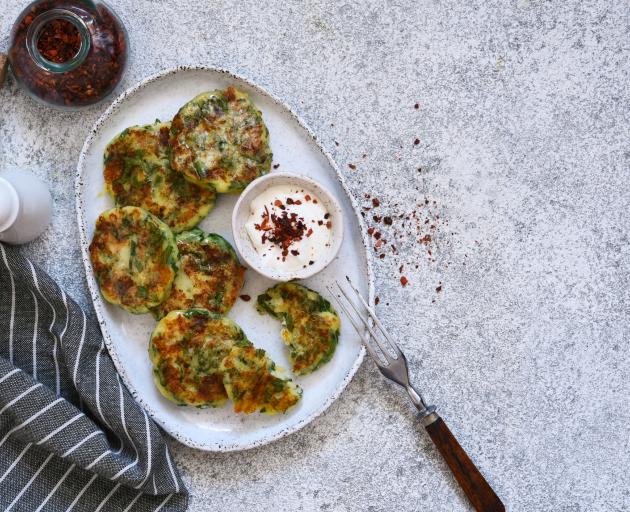 Photo: Getty Images
A thin, crisp crust is essential here, a contrast to the soft hummus-like texture of the cakes. Once the cakes have rested and firmed in the fridge, they should be lowered carefully into the sizzling oil using a palette knife, then left to form a thin, golden crust on the bottom before you attempt to turn them. Fiddling with them as they cook, although tempting, will result in them breaking up in the pan.

Wash the spinach and remove any tough stalks. Put the wet leaves in a deep saucepan over a moderate heat, cover and steam for 2 or 3 minutes. Turn the leaves over and continue cooking until they are bright and soft. Drain thoroughly and give the leaves a firm squeeze to remove any remaining water.

Peel the outer leaves from the lemongrass and discard them. Chop the softer inner leaves and put them in an electric coffee mill or spice grinder and process to a coarse pulp. Alternatively, chop them very finely.

Finely chop the chilli, grate the zest of the lime finely then add to the food processor. Pull the coriander and mint leaves from their stems, add to the bowl and process to a rough paste, seasoning with mustard and a little salt as you go.

Transfer the chickpea paste to a mixing bowl then combine with the spinach and breadcrumbs. Divide the mixture into 12, shape each into a small cake the size of a digestive biscuit and set aside to chill in the fridge for 20 minutes.

To cook, warm about 1cm of groundnut oil in a shallow pan over a low to moderate heat. Lower the cakes, a few at a time, without crowding the pan. As they turn golden on the underside, gently turn with a palette knife and cook the other side. Remove carefully to warm plates.

Baked apples with sherry and marmalade

There is something pleasing about basting food as it cooks, about spooning the cooking juices over it as your dinner bakes. Basting the apples here will ensure they are evenly caramelised and richly coated with the sherry and marmalade. I do this 2 or 3 times during the 45 minutes or so it takes the apples to bake. The sauce will thicken to a jammy consistency on the hob later.

Heat the oven to 200degC. Pour the sherry into a medium-sized saucepan. Add the lemon juice, sugar, bay leaves and marmalade, then warm over a moderate heat until the sugar has dissolved.

Cut the apples in half, place them cut side up in a baking dish, then pour the sherry and marmalade syrup over them. Bake for 40-50 minutes or until their flesh has puffed up a little and they are soft enough to cut with a spoon. Baste the apples frequently while they cook.

Remove the dish from the oven and place over a high heat, watching carefully as the syrup reduces to a jammy consistency. Serve the apples and syrup with creme fraiche or thick yoghurt.