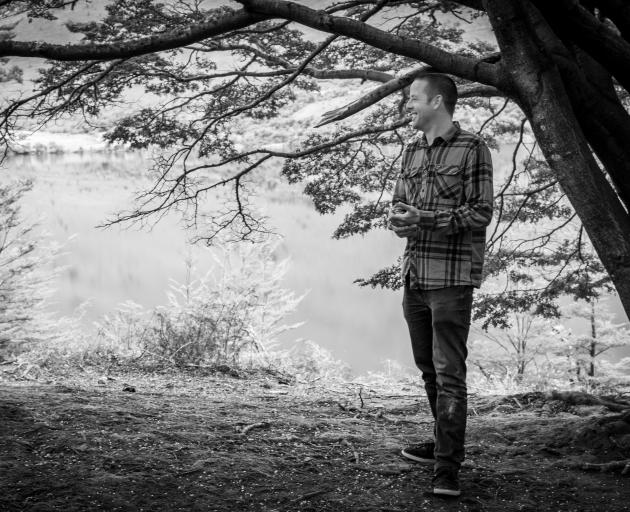 If Jonathan Rogers gets bored at work, he has only himself to blame.

‘‘It’s on me. I have unlimited freedom to create menus and do the food I want to do.’’

But that wasn’t always the case. 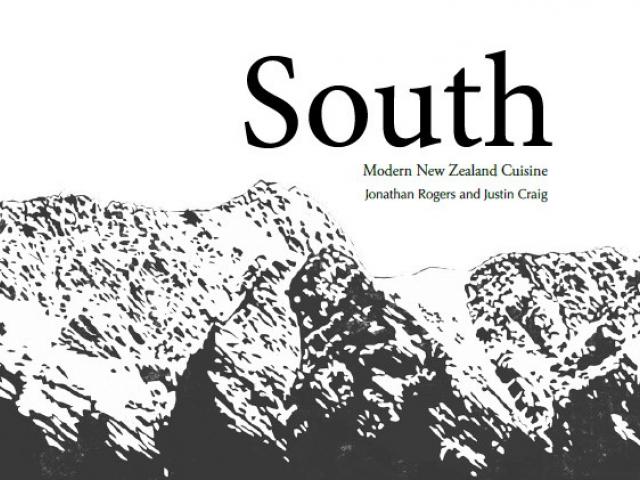 THE BOOK: South, Modern New Zealand Cuisine , by Jonathan Rogers and Justin Craig, self-published, available at select outlets, including Matakauri Lodge, $180 plus GST.
A keen skateboarder and not really a fan of school, the idea of completing a year in seventh form (year 13) in order to get into art or photography school did not appeal.

So he came up with the perfect solution to life after school - ‘‘I thought I could be a chef as I could work nights and skateboard during the day’’ - and enrolled in Manukau Institute of Technology.

That led to a job at Auckland restaurateur Tony Adcock’s Orbit and Harbourside Seafood Bar & Grill.

After three years, he decided it was time for a change and he wanted to learn to snowboard.

So he headed south to Queenstown.

‘‘It was sleepier back then. There was this sense of community. It was something I’d never experienced growing up in South Auckland. Queenstown was safe to walk around at night; your belongings were safe.

‘‘I loved the mountains, the lake, the snowboarding.’’

His love of snow sports and his Harbourside connections saw him head to the Mammoth Ski Resort in California to help set up a restaurant before he returned to Auckland for 18 months.

The next ski season he headed to Whistler in Canada - a pivotal experience for the young chef.

He got a job working with one of Canada’s top chefs, Melissa Craig, at Bear Foot Restaurant.

‘‘That’s where I started to come up with my own food philosophy. I was really influenced by what the chef was doing - the farm to table approach.’’

Rogers became aware of the importance of using top-quality ingredients from many different suppliers.

‘‘There was the variety, using heritage varieties. It was a hugely influential part of my career. The quality of ingredients and the quality of food was at such a high level compared to what was happening in New Zealand at the time, this was 2004-05.’’

When he returned to New Zealand, he had a job lined up with celebrity chef Simon Gault, but on the flight home

‘‘Rex was one of my favourite chefs, so I applied for that.’’

He got the job just as he was about to start working for Gault.

Rogers flourished under Morgan and after a year was promoted to head chef. Then when Morgan’s contract finished he stepped into the top job.

When the restaurant closed, he moved to the Marlborough Sounds where he worked with then soux chef Haanes Bareiter (who has just opened Titi in Dunedin).

While there, he developed his passion for using fresh, local produce and after a couple of years, in 2011,

The idea of doing a cookbook came about after he was asked to do a couple of recipes for a local supplier’s blog and ‘‘it turned out they got the most hits on the website’’.

Initially reluctant to write a cookbook, Rogers was encouraged by the photographer involved with the blog and sent a concept idea to publishers.

‘‘While they thought it was a cool idea they did not think fine dining sold very well in New Zealand, so we left it.’’

The decision was then made to self-publish the book and it was finished in November and published this year. It was a triumph for the small team that put it together, including pastry chef Justin Craig, who also contributed recipes.

‘‘It was awesome after five years of photography, editing and writing. Some of the earlier recipes we had to re-do as they didn’t align with the later stuff.’’

Rogers said picking his favourite dishes from the book was hard, but said his Fiordland venison tartar with nettles and quail yolk stood out for its emphasis on wild and foraged spring Central Otago produce.

He also has a soft spot for a dish featuring a quail confit and ballotine with potato and nasturtium - he likes to use nasturtium flowers as they are a colourful garnish and the leaves have a slightly peppery taste.

‘‘I like their aesthetic, their flavour profile and how they eat.’’

Rogers has a distaste for cliches, especially when talking about his food style, but says it is the simple things that are important.

‘‘It has to be flavour first. It can look amazing, be conceptual, but it also has to taste amazing.’’

An important part of that is using the best-quality ingredients and supporting growers and producers.

‘‘All good chefs want the best-quality ingredients available as it makes your job easier.’’

Changing his menu daily means he can take advantage of seasonal ingredients no matter how short their season is.

‘‘I’m very focused on seasonality and it’s the driving force behind the book - its chapters are divided into seasons.’’

Rogers likes to seek out small, ethical and organic growers and producers and is always after the newest ingredient.

‘‘It’s all about supporting local. There are some great people doing really cool things.’’

The vegetable garden at Matakauri is small and mostly used to grow ingredients that cannot be sourced locally, such as broad bean flowers and leaves.

He likes to hit the road a couple of times a year to visit farms and orchards to discover new and unusual ingredients - he once came across an owner near Alexandra with pear trees that were about 150 years old - to inspire a new dish.

‘‘I might pick something from the garden or a new ingredient arrives and I’m like ‘What can I do with this?’. That gives me a huge boost.’’

He also tries to spend an hour a day on menu development, using his ‘‘massive’’ collection of cook books and looking at what overseas chefs are using as inspiration. 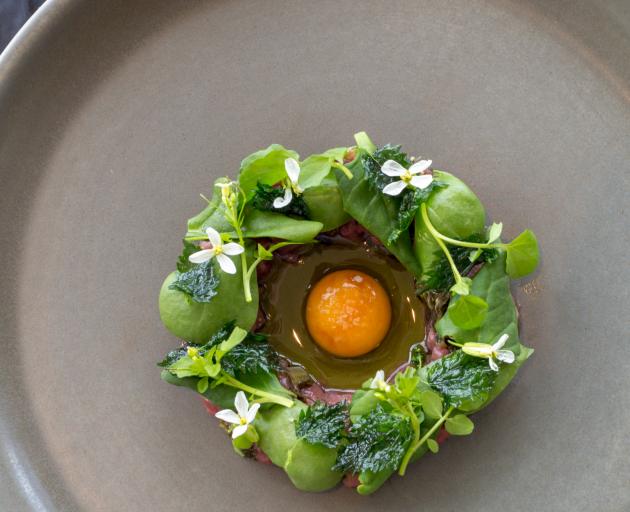 This dish emphasises what wild and foraged Central Otago produce is all about in spring. We use wild venison from Fiordland and we forage the watercress, nettles and Miner’s cress from around Queenstown. The nettles are fermented to provide complexity to the tartar. We also deep fry them to add a textural component. Pea shoot tips and radish flowers are harvested from the vegetable garden and used to garnish.

In a small mixing bowl, combine the diced venison and the chopped fermented nettles.

Using a large ring mould, form the tartar into a circle in the centre of each plate. Garnish the tartar with the assorted greens, flowers and nettle crisps. Drizzle the inside of the circle with the extra virgin olive oil and place a pickled quail yolk in the centre.

Place the rice bran oil in a medium-sized saucepot. Over medium heat, bring the oil to 180degC. Line a tray with paper towels. Once the oil has reached 180degC, fry the nettle leaves for approximately 30 seconds or until crispy. Quickly remove and place on the paper towels to drain. Season with sea salt. 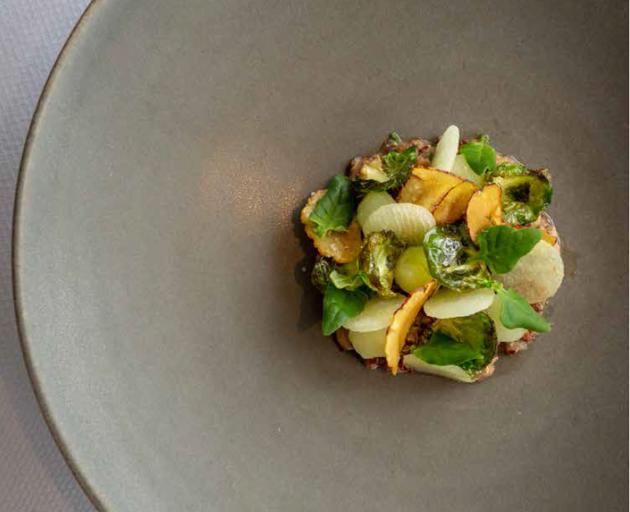 My former head chef in Canada, Melissa Craig, made the most beautiful ragouts from different combinations of braised or confit meats, grains and vegetables. They were, at the time, the most delicious preparations I’d ever tasted. I would even hang around her section trying to steal leftovers! This dish is an homage to the great techniques I learnt from Melissa.

Heat an oven to 120degC. Place the pork belly in a deep ovenproof tray. Heat a large heavy-based saute pan over high heat. Add the rice bran oil. Once the oil is almost smoking, add the diced leek, onion, carrot, celery and garlic, then caramelise. Add the caramelised mixture to the oven tray.

Place the water in a large pot, season with salt and bring to a boil. Add the red quinoa and turn the heat down to a simmer. Once the quinoa has cooked, strain through a sieve and place on a large tray in a thin layer.

In a medium-sized saucepot, sweat the shallots and garlic until translucent. Add the chopped herbs and reserved braised pork belly. Mix well with a wooden spoon. The pork belly should break apart once it starts to warm up. Add the roast chicken jus and mix well. The jus should bind the meat. Add more if necessary. Remove from the heat and add the sherry vinegar.

The vinegar should cut through the richness of the meat. Mix in the chives and red quinoa. Season to taste with sea salt.

Place a mound of the pork belly and red quinoa ragout in the bottom of each deep sided bowl plate. Place 5 small pickled apple balls on top of the ragout. Scatter the crispy Brussels sprout leaves, chestnut crisps and pickled apple discs around the pickled apple balls. Garnish with the New Zealand spinach leaves. 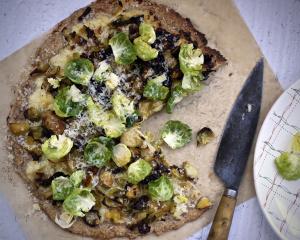 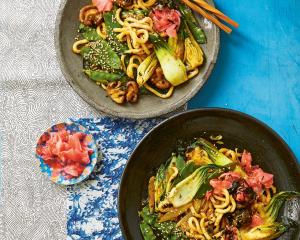 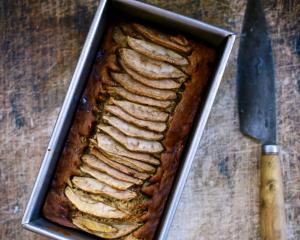 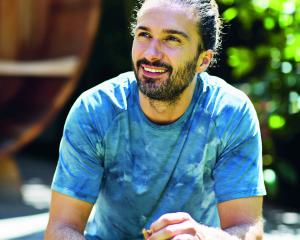 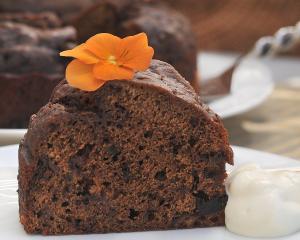 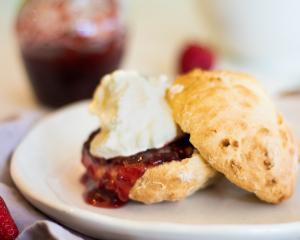 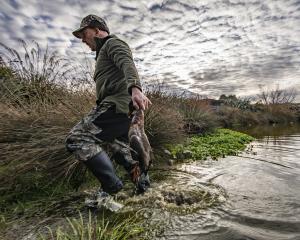 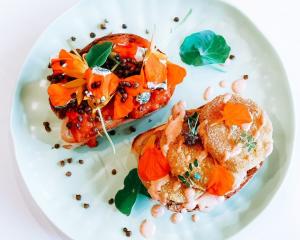 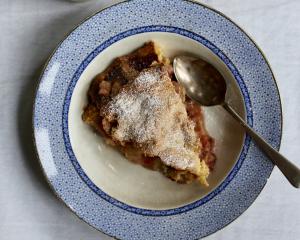 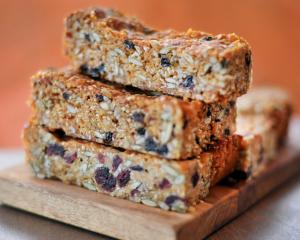 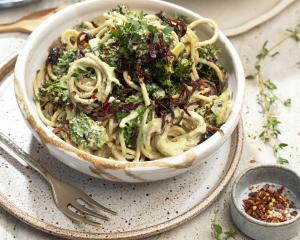 Keeping it simple with wholefoods