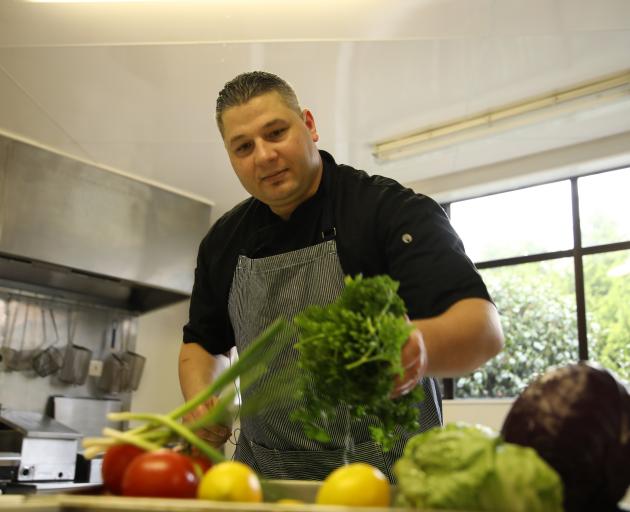 Abdal Kyassah prepares some of his Syrian food for a catering client. Photo: Elodie Berthe Red Cross
After two years in Dunedin struggling with language and cultural differences, Abdal Moneem Kyassah is restarting his hospitality career - this time as his own boss, writes Rebecca Fox.

Abdal Moneem Kyassah is out to prove Syrian food is ''five-star quality''.

To do this, the refugee from Syria has started up his own catering company and is aiming to one day have his own restaurant.

Kyassah arrived in New Zealand in 2017 with his wife and three children and has settled in Dunedin.

Getting to safety from their war-torn country has been a long journey.

Kyassah, a chef, and his wife originally moved to Malaysia, where they lived for five years - their three children were born there - before getting the offer from the United Nations of resettlement in New Zealand.

They jumped at the offer, even though they knew nothing of New Zealand and Kyassah spoke minimal English.

One thing Kyassah did know was that he would do whatever he could to make use of his hospitality training to start his own business.

''I planned what I was going to do, formed business plans in my head.''

He had completed two years' hospitality training in Syria and worked in different countries, such as Syria, Saudi Arabia and Malaysia. 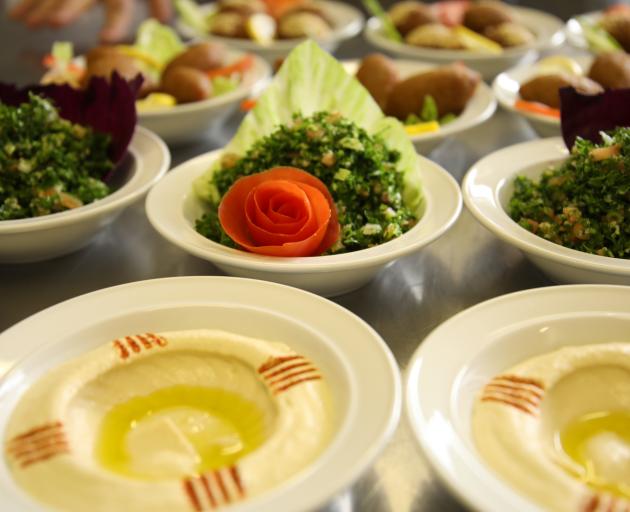 A selection of Abdal Moneem Kyassah’s Syrian food.
When he moved to Malaysia he continued to work in kitchens at restaurants and hotels such as JW Mariott, where he got to cook for the prime minister and Middle Eastern ambassadors.

After finally being settled in a home in Halfway Bush, Kyassah, along with improving his English skills, started to make his plans a reality.

He began by finding out what familiar ingredients he could get here and what he needed to find an equivalent for.

Discovering that Central Otago thyme was just like the thyme that grew in his homeland was a shock.

A good shock, as he soon discovered it worked well with the seeds, herbs and nuts Syrians use in their za'atar mix.

The mix is just one of a range of condiments and spice mixes Kyassah is making to sell and it is proving popular at local retailers. He already has an abdal za'atar, smoked za'atar and shatta (Syrian harrisa) on the shelves.

To understand how the restaurant and cafe scene works in Dunedin and what is involved in running a business, Kyassah has been working at various restaurants as a casual, part-time and full-time.

He has been slowly saving what little money the family can afford to put aside from his work to buy equipment and ingredients.

Kyassah has trialled his ideas by doing events for the University of Otago, Otago Polytechnic, St Margaret's College, the Red Cross and individual clients. Those events have helped him raise money to buy more equipment.

Now that he has a Facebook page set up, is working on his website and has an accountant to help him with the business side, his food licence from the Dunedin City Council and access to a commercial kitchen, he is working hard to expand his clientele.

An opportunity to show off his cuisine during the new Dine Dunedin festival, which celebrates the city's cuisine and restaurant culture, was too good to be true, he said. He was grateful to local cafe Buster Greens for hosting the event.

''Its a good place to present the five-star quality of Middle Eastern Syrian food.''

He will be showcasing Syrian barbecue with a mixed grill of prawns, lamb and chicken as well as foul moudamas (broad beans), toshka (stuffed pita bread with lamb and cheese), mohalabia (milk pudding) and baklawa (a dessert pastry more commonly known in New Zealand as baklava).

''I really want to educate the Dunedin public.''

Most Syrians enjoyed a breakfast of jam and labna (firm yoghurt) and an olive salad, Syrian bread with olive oil and za'atar, a fried egg done shakshuka-style and also a variety of cheeses.

Kyassah is working to make his own haloumi and other kinds of cheese from cow's milk, which he hopes will be on the shelves soon.

Syrian cuisine really made the most of the produce it had available, he said. Eggplant was made into ''at least'' 15 different dishes and cabbage was made into seven different ones.

''We do that with everything. Most people grow their own vegetables and bulgur wheat.''

They also used olive oil for most of their cooking. But he had found some ingredients, such as zucchini, different from what they grew in Syria.

While lamb was a staple dish in Syria as it was in New Zealand, he said the sheep in Syria were fattier, which gave them greater flavour.

He and wife Faiha are about to welcome their first ''Kiwi'' into the family with their fourth child due soon.

''It has been a struggle, with language, culture but I'm always positive.''

He still had his extended family back in Syria and tried to send back money whenever he could to help them.

Longer term, he hoped to get some financial backing to enable him to open a restaurant.